The stomachs of other animals in the same suborder probably wouldn’t occur to most people as a place to find a new species, but that’s exactly where one has turned up.

In the guts of a Central American coral snake (Micrurus nigrocinctus), herpetologists have found the remains of a snake unknown to science.

That’s not even the most amazing part of this story, believe it or not. The specimen had been preserved and in storage for over 40 years, just waiting for someone to take a look.

Now it’s finally made an official debut into the scientific annals, in a paper delightfully titled “Caudals and Calyces: The Curious Case of a Consumed Chiapan Colubroid.” Neat.

It hails from the state of Chiapas, in the south of Mexico, and it’s only known from the one partially digested specimen recovered in July 1976 by local palm harvester Julio Ornelas-Martı´nez.

More specifically, Ornelas-Martı´nez recovered a large Central American coral snake, a colourful venomous species known to occasionally make a meal of other snakes, in the forests of Cerro Baúl. 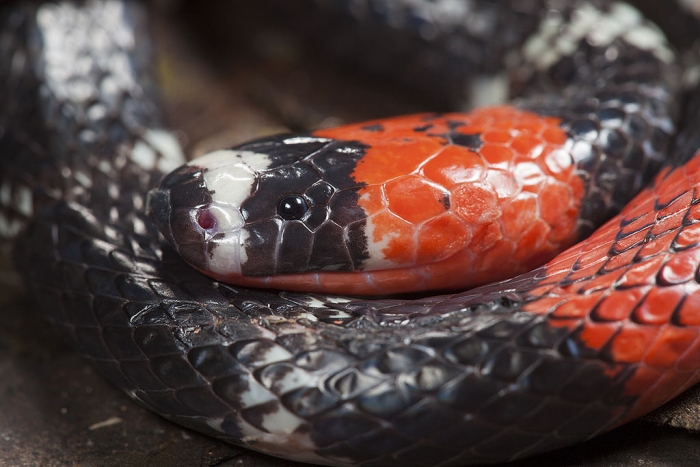 When researchers opened it up and discovered the remains in its belly, they realised that they had something unusual – but instead of writing up the finding straight away, they preserved it and set it aside for later study in a museum.

Herpetologist Jonathan Campbell of the University of Texas and his colleagues have now completed that study, and have been able to ascertain quite a lot about Cenapsis.

First, the differences that set it apart as a new species include large, undivided plates on the underside of its tail (subcaudal scales), the shape and covering of its male sexual organ (the hemipenis), and the shape of its skull.

It’s not a big snake – the specimen recovered was an adult male, measuring only 258 millimetres (just over 10 inches). Some of its features, such as the elongated shape of its skull and relatively plain scales, the researchers say, suggest it is a type of burrowing snake that spends much of its time underground.

However, there are some puzzling elements that likely won’t be resolved unless researchers can observe a living snake of this species.

“The dorsal colour is rather unremarkable, being uniformly pale brown,” the researchers wrote in their paper.

In addition, while its forest habitat could indicate it feeds on soft-bodied prey like slugs and earthworms, its mouth and teeth are more like those of snakes that feed on hard-bodied chitinous prey like insects, centipedes and arthropods.

If it is a burrowing snake, that could explain why, in spite of several expeditions, it has continuously eluded researchers. Not a single specimen has been seen since 1976. But that doesn’t mean it’s gone.

“This provides evidence of just how secretive some snakes can be,” Campbell told National Geographic. “Combine their elusive habits with restricted ranges and some snakes do not turn up often.”

And it probably needs to be slippery to evade the finely honed hunting skills of the Central American coral snake. Campbell’s specimen just got unlucky – but that turned out to be lucky indeed for science.

The team’s research has been published in the Journal of Herpetology.

This Small Australian Marsupial Is Quite Literally Dying For Sex
The First Stars May Have Been Heavier Than 100,000 Suns
Stunning Green Comet Will Be Closest to Earth Today, at Peak Brightness
JWST Has Accidentally Detected a Tiny Asteroid ‘Hidden’ Between Mars And Jupiter
Bar Graphs Induce a Hidden Bias in Interpretation, Experiment Shows