Way back in the Late Triassic period, in what is now modern day Poland, a long-snouted dinosaur ate a big meal of green algae and then took a poop.

It was a day like any other for the animal, but for us, roughly 230-million years later, those very fossilized feces have revealed an entire family of undigested beetles.

The insects are the first to be described from fossilized feces and they are unlike anything we’ve discovered in amber before. Not only are these insects much more ancient, their legs and antennae are so intact, researchers were able to precisely reconstruct their three-dimensional shape and form. The new species has been named Triamyxa coprolithica.

“I was really amazed to see how well preserved the beetles were, when you modeled them up on the screen, it was like they were looking right at you,” says paleontologist Martin Qvarnström from Uppsala University in Sweden. 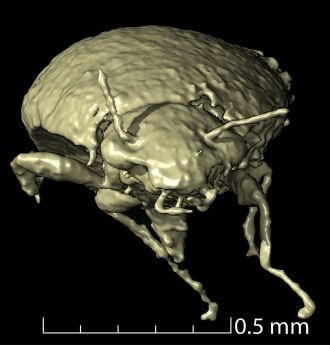 The Triassic is thought to be a crucial period for insect evolution, especially for beetles, which are the most diverse order of organisms on Earth today.

Unfortunately, many beetle fossils from this time only give us an imprint of the species, not a three-dimensional view. Amber deposits are the exception, however, these usually date no further back than 140 million years.

The beetles found in dinosaur poop are nearly twice as old.

After close analysis, researchers have placed the new species of beetle in its own family, Triamyxidae.  Given certain resemblances, they suspect the bugs are an extinct offshoot from a small suborder of beetles, known as Myxophaga, which has a sparse fossil record.

Today, modern myxophagan beetles can be found thriving in large numbers on green algae mats, usually near the water; the discovery suggests their ancient relatives might have been abundant in similar aquatic environments.

The fossilized poop itself, known as a coprolite, is thought to have come from a two-meter-long dinosaur, called Silesaurus opolensis, which mainly eats plants but also appears to have a penchant for insects.

The number of beetles in its excrement certainly suggests it does.

Because these insects are so small and so numerous, scientists think they were probably a side to the main meal.

If a dinosaur was munching on green algae near the shore, for instance, any beetles it consumed along the way would be a crunchy surprise and, if digested, a nutritious roundoff to the meal.

Given their hardy, tiny bodies, researchers think the beetles would have had a better chance of surviving dinosaur digestion compared to other insects. Anything with a soft body would have been easily broken down.

“Although Silesaurus appears to have ingested numerous individuals of T. coprolithica, the beetle was likely too small to have been the only targeted prey,” explains Qvarnström.

“Instead, Triamyxa likely shared its habitat with larger beetles, which are represented by disarticulated remains in the coprolites, and other prey, which never ended up in the coprolites in a recognizable shape. So it seems likely that Silesaurus was omnivorous, and that a part of its diet was comprised of insects.”

The discovery has scientists thinking coprolites could make for an excellent window into early insect evolution. Fossilized feces might be harder for the human eye to see through, but using micro CT scanning, researchers could make out all the tiny details on T. coprolithica.

“In that aspect, our discovery is very promising, it basically tells people: ‘Hey, check more coprolites using microCT, there is a good chance to find insects in it, and if you find it, it can be really nicely preserved’,” says entomologist Martin Fikáček from the National Sun Yat-sen University in Taiwan.

It took until the Early Cretaceous for tree resin to be abundant enough to capture early insects in action and fossilize them. During the Triassic, there was far less tree resin around, which means we don’t have amber deposits to tell us what insects looked like at this time.

Fikáček thinks dino poop is our chance to find out more.

“Maybe, when many more coprolites are analyzed, we will find that some groups of reptiles produced coprolites that are not really useful, while others have coprolites full of nicely preserved insects that we can study,” he says.

“We simply need to start looking inside coprolites to get at least some idea.”

Orcas Are Contaminated With a Forever Chemical Associated With an Unlikely Product
The First Stars May Have Been Heavier Than 100,000 Suns
Bar Graphs Induce a Hidden Bias in Interpretation, Experiment Shows
Embers of an Ancient Inferno Pinpoint The Worst Extinction in Earth’s History
Incredible ‘Fairy’ Robot Sails on The Breeze Like a Floating Dandelion