But humans can also be stupid. Especially when it comes to the way we treat living, breathing, animals.

And so, as many news organisations have been reporting, we come to the story of a fishing enthusiast in Washington state who found an octopus and – yes, you know what’s coming – put it on her face.

The woman was at a local fishing derby where she saw that a fellow fisher had caught a small octopus, which could be a young giant Pacific octopus (Enteroctopus dofleini), or a Pacific red octopus (Octopus rubescens).

She was apparently going to eat it for dinner, but before that, decided it was a great time for a photo opportunity and – we’re saying this again – placed the octopus on her face.

Octopuses (no, not octopi) might look squishy, and they mostly are, but the eight-armed animals also have a secret weapon in the middle of all those tentacles – a scissor-like beak.

The beak sits inside a section called the buccal mass, which is the first part of their simple digestive system, and is surrounded by the muscly arm appendages.

Made out of hard chitin (same as the stuff in crab exoskeletons, for example), this octopus beak actually looks a lot like a parrot’s, as you can see in this picture of a giant squid’s beak below. 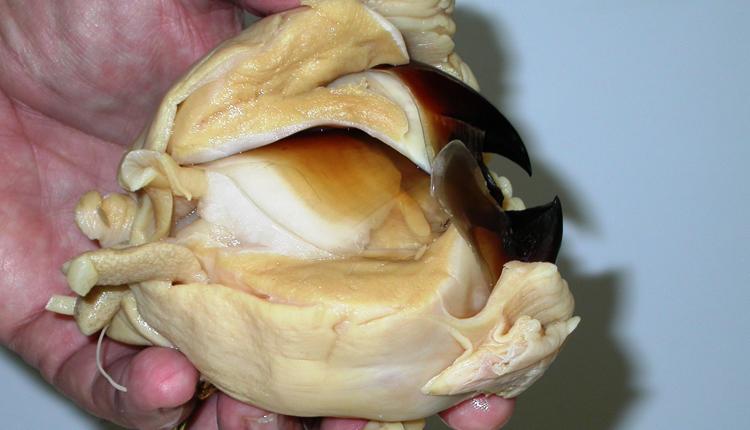 (Smithsonian Institution/Wikimedia)The beak and muscles combined can give a good chomp if the octopus needs to. These cephalopods eat anything from fish to crabs, so their beaks can handle some pretty tough crunching.

We’re sure you can see where this is going. The octopus, probably unimpressed about being on someone’s face, dished out a couple of painful bites and injected some venom into the wound. The woman’s face reportedly bled for at least 30 minutes.

Although you might only know about blue ringed octopus genus (Hapalochlaena) being venomous, all octopus actually have venom, even though most are not lethal to humans.

There aren’t many accounts of humans being hurt by octopuses – they tend to avoid humans, and many attacks haven’t been verified.

That being said, humans are pretty good at trying to provoke octopuses. Back in the 1950s and 60s, a popular sport to play was called ‘octopus wrestling’, where a diver would grapple an octopus and try to drag it to the surface. The team that caught the largest animal won.

Thankfully, that particular sport went out of style in the late 60s, but it seems that we still haven’t quite learned our lesson.

The woman in this story ended up in the hospital a few days after the bites, when she realised she couldn’t swallow properly and her face had swollen up. After being given antibiotics she’s mostly back to normal, however doctors told her the swelling may come and go for months.

This is as good a time as any to remind people to leave all wild animals alone where you found them.

“I’m just here to tell people that just because something looks delicate and precious or it can’t hurt you, know what you’re touching before you actually do something like I did,” the woman warned everyone on Seattle’s KING 5 News.