Venomous spiders prey upon snakes many times their size, a new study finds – and often emerge victorious against snakes as venomous as they are.

The study researchers found 319 records of spiders killing and feasting upon snakes, 297 of which were naturally occurring events in the wild. (The remaining 22 were staged in captivity.) About a third of those examples came from scientific observations published in journals, while the rest were found on news or social media sites.

“The longer I deal with this problem, the more I realize that certain spiders accomplish such incredible feats,” said study co-author Martin Nyffeller, a conservation biologist at the University of Base who has previously reported on spiders eating bats and other vertebrates. 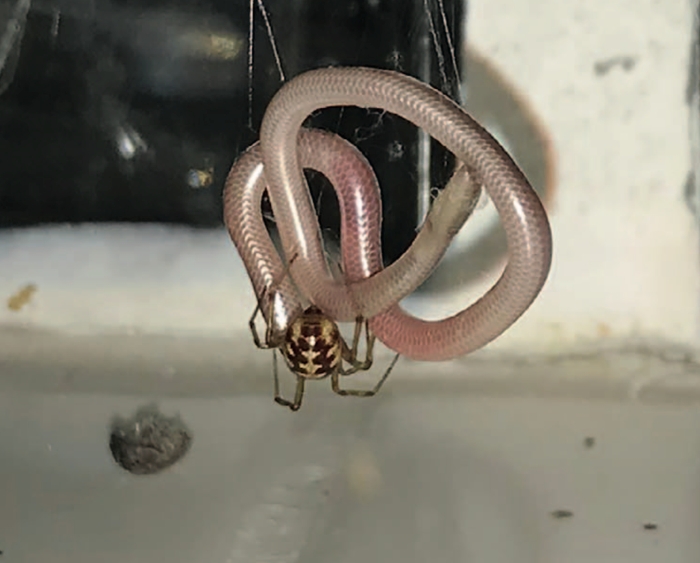 Snacking on snakes was remarkably widespread, with more than 30 spider species engaging in the practice in natural conditions, and another 11 taking the opportunity in captivity, Nyffeler and University of Georgia herpetologist J. Whitfield Gibbons reported this month in the Journal of Arachnology.

Widow spiders were the most frequent spiders involved, responsible for about half of the snake deaths; this group includes the infamous hourglass-marked black widows (Latrodectus mactans, L. Hesperus, L. variolus) as well as relatives like the African button spider (L. indistinctus). 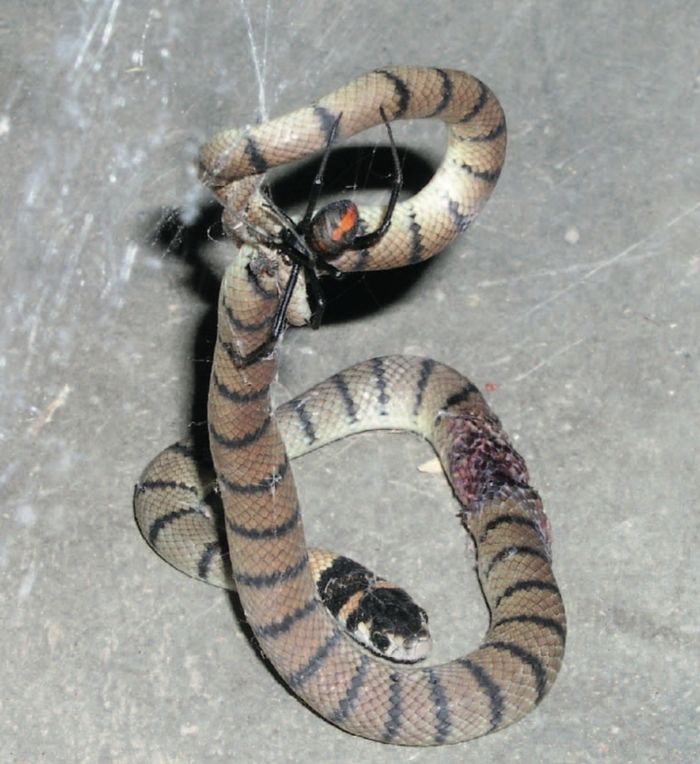 These spiders are small, 0.4 inches (1.1 centimeters) in size at most, and they typically target small, young snakes, but their venom is deadly enough to kill much larger animals.

Related: See photos of the spiders feasting on snakes

Members of the tarantula family were responsible for another 10 percent of snake kills. These larger spiders do not build webs, but hunt prey actively on the ground or in trees.

Another 8.5 percent of predation incidents were carried out by large orb-weaver spiders, which are also known to catch and eat bats and birds. These spiders weave large and very strong circular webs. Once the spiders kill the snakes, they suck out their innards just as they would an insect.

Reports of spiders eating snakes came from every continent except Antarctica, though half of the events reported occurred in the United States and almost a third occurred in Australia.

The researchers found evidence of spiders preying on 86 different species of snake, with snakes of the colubrid family being the most common victims. This family includes common species such as garter snakes (Thamnophis cyrtopsis) and rat snakes (Pantherophis guttatus), and their prevalence among spider victims likely reflects the fact that they are the most abundant snake family on all continents except Australia, Nyffeler and Gibbons wrote. 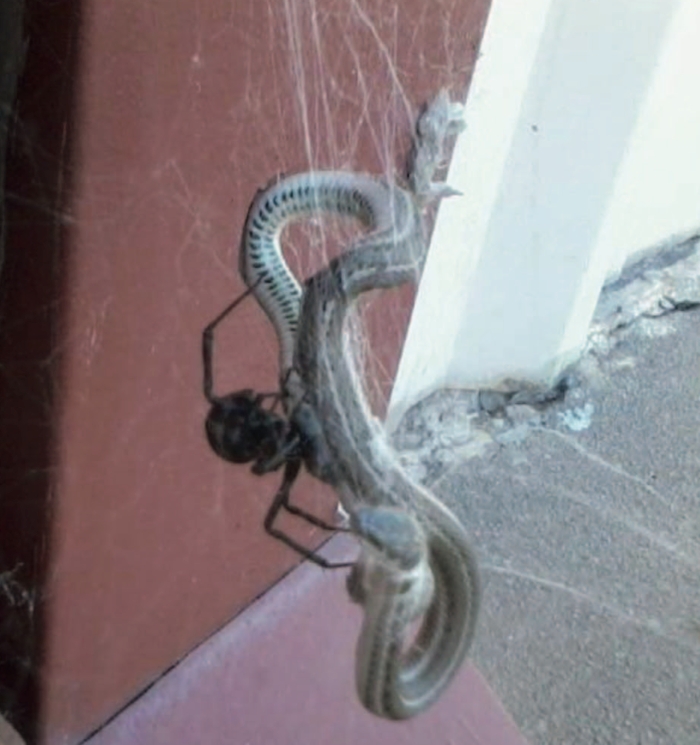 Most of the snakes attacked by spiders were babies or juveniles weighing less than a gram. But spiders sometimes took down large serpents, too: The largest victims were up to 3.25 feet (100 centimeters) long and weighed several ounces.

Snakes that large were typically killed by orb-weavers or large tarantulas. Black widows could overcome snakes up to 30 times their own size by weight, and in one report, a cobweb spider (Steatoda triangulosa) entangled a 6-inch-long (15 cm) garter snake that was 355 times the spider’s weight.

“Such an achievement is truly surprising,” Nyffeler told Live Science. “It is almost unbelievable.”

It could take anywhere from hours to days for the spider venom to kill the snakes, 30 percent of which were venomous themselves. Spider attacks were fatal to snakes in 86 percent of the reported incidents, while only 1.5 percent of snakes escaped on their own. Another 11 percent were rescued by human observers.

Once a spider vanquishes a snake, it might take days to finish the meal.

In most cases, the researchers wrote, snakes are likely a rare and lucky meal for spiders that typically subsist on insects. But some spiders, particularly tarantulas, might make snakes a regular part of their diet. Australian redback spiders (Latrodectus hasselti), too, have been seen eating both lizards and snakes in large quantities.

Nyffeler has a snake phobia, he said, but the research mixed fear with fascination.

“After studying the ‘world of spiders’ for a lifetime, it was very fascinating to get a glimpse into a parallel world, the ‘world of snakes,'” he said.

Amazing photos of spiders from around the world