A mud puddle doesn’t really sound all that threatening, but there’s one in California’s Imperial County that’s so troublesome, an emergency had to be declared earlier this year.

It’s called the Niland Geyser and it’s exactly that, a geyser of bubbling mud. But there’s a strange twist – this menacing puddle has been slowly creeping across the ground, to the point where it’s now threatening railroad tracks and a state highway.

The Niland Geyser first appeared in 1953, and sat around without incident for decades. Then, around 11 years ago, things shifted. The geyser started moving across dry ground at a glacial pace.

Now, things have gotten more serious – in the last six months, that pace has picked up considerably. In a few months, the Niland Geyser travelled 18.3 metres (60 feet).

Then, it travelled another 18 metres in a single day – bringing it worryingly close to Union Pacific’s railway tracks, State Route 111, a petroleum pipeline, and fibre optic telecommunications lines.

Overall, this bubbling puddle has moved roughly 73 metres (240 feet) from where it was a decade ago. There have been several attempts to stop the mud. The basin has been drained of water. Wells have been dug, to try and relieve pressure on the geyser. Loose stone was dumped in the mud spring.

As a somewhat desperate measure, the Union Pacific Railroad built a wall of steel and boulders 22.9 metres (75 feet) deep and 36.6 metres (120 feet) long between the mud spring and the railroad.

Nothing has stopped it, not even the wall. In October, the mud just seeped underneath it and kept sludging on towards the tracks.

The source of the mud, known as the mud spring or mud pot, is located at the southern end of the San Andreas Fault, the boundary between the North American and Pacific tectonic plates.

However, its important to note that the geyser’s presence and movement are not signs of seismic activity. A mud pot is associated with a tectonic boundary, but it’s actually a bit like a sinkhole (except full of, well, mud). 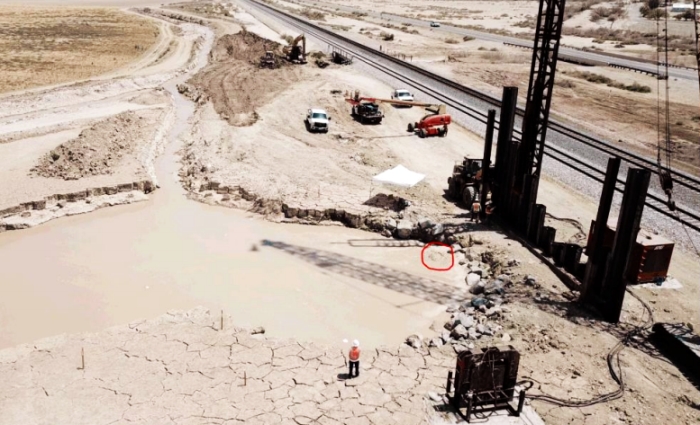 The Niland Geyser is a geothermic feature where water is forced upward through the soil. It’s not a very hot spring, with a temperature of only around 27 degrees Celsius (80 Fahrenheit); instead it’s bubbling with carbon dioxide gas that is also seeping up from deep under the ground, released by prior earthquake activity.

It also reportedly has a bit of a stench, smelling faintly of rotten eggs – not uncommon for underwater spring activity, due to the hydrogen sulfide in the water.

As it moves along through a soft sedimentary rock called mudstone, it leaves a soggy trail in its wake, weakening the integrity of the ground to a depth of about 9-12 metres (30-40 feet), making it boggy and unsuitable to support structures.

So there’s no need to worry that the long-awaited “Big One” earthquake is about to hit. The Niland Geyser is plenty enough to worry about without borrowing impending doom.

The Union Pacific Railroad has already built an alternate track for its trains to travel along, which they do at a slower pace than they used to. If the mud continues to creep onward, a more permanent solution, such as a bridge, may need to be implemented.

And if it creeps too close to the road, California Department of Transportation Ed Joyce told KYMA, “Caltrans will have to close state route 111 if that mudpot advances to a point where it impacts the state road. We obviously have to divert traffic.”

Sword Mistaken For Replica Is Actually An Ancient 3,000-Year-Old Weapon
This Asteroid Has Survived For 4 Billion Years. That Could Be a Huge Problem
Bacteria Can Use Plastic Waste as a Food Source, Which Isn’t as Good as It Sounds
An Expert Explains Why The Radioactive Water Stored at Fukushima Should Be Released
Scientists Create Shapeshifting Humanoid Robot That Can Liquefy And Reform