Newly discovered microfossils some 3.42 billion years old are the oldest evidence yet of a particular type of methane-cycling microbe life – and they could help us understand how life gets started in the first place, both on Earth and further out into the Universe.

These life forms would have originally existed just below the seafloor in pockets of a rich liquid soup, created from the mixing of cooler seawater from above and the warmer hydrothermal fluids rising up from the depths.

The new findings may answer some of the questions about how and where life first began during the Paleoarchean era (3.2-3.6 billion years ago), or whether indigenous microorganisms like this were around even earlier in Earth’s history. 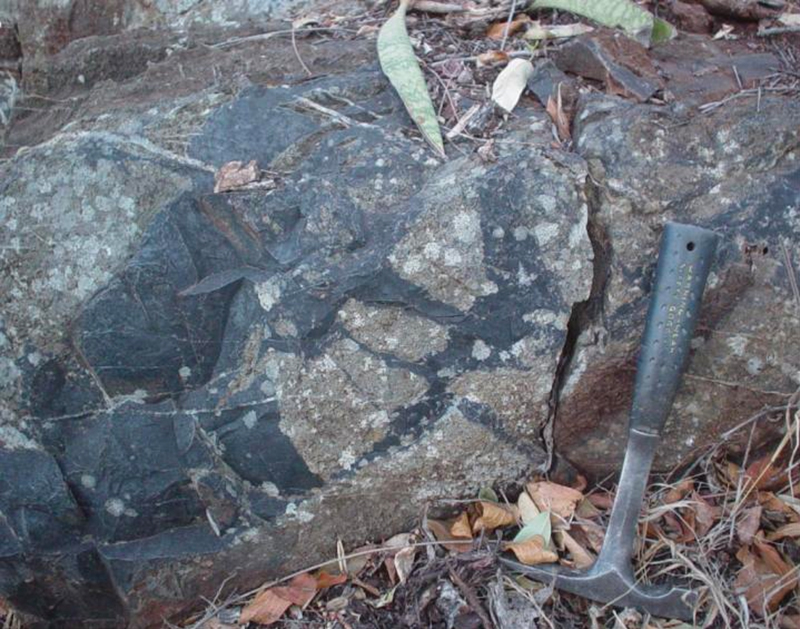 The outcrop from which a sample was taken. (Cavalazzi et al., Science Advances, 2021)

“We found exceptionally well-preserved evidence of fossilized microbes that appear to have flourished along the walls of cavities created by warm water from hydrothermal systems a few meters below the seafloor,” says paleontologist Barbara Cavalazzi from the University of Bologna.

“Sub-surface habitats, heated by volcanic activity, are likely to have hosted some of Earth’s earliest microbial ecosystems and this is the oldest example that we have found to date.”

The rocks holding the fossils were collected from the Barberton Greenstone Belt in South Africa, near the border with Eswatini and Mozambique – a place where some of the oldest and most well-preserved sedimentary rocks on the entire planet can be found.

Analysis of the retrieved sediment showed microfossils with a carbon-rich outer covering around a core that was both chemically and structurally distinct – indicating microorganisms with cellular material wrapped in a wall or membrane.

Further study revealed most of the major chemical elements needed for life, plus other supporting evidence that these microfossils were once microbes: concentrations of nickel similar to those found in modern-day archaea prokaryotes, microbes which use methane rather than oxygen like their distant ancestors did.

“Although we know that archaea prokaryotes can be fossilized, we have extremely limited direct examples,” says Cavalazzi. “Our findings could extend the record of archaea fossils for the first time into the era when life first emerged on Earth.”

Scientists continue to make progress in figuring out how life on Earth got started, and how the inorganic became organic – perhaps through the help of a billion years of lightning strikes, or blasts from hydrothermal vents – but we still don’t know exactly what happened and in what order.

That’s perhaps not surprising, considering how difficult it is to peer back billions of years, but this latest research suggests that subsurface hydrothermal systems could be as important in the creation of life as some scientists have previously hypothesized.

Getting a better understanding about the conditions that life requires to exist and the parameters that it can work inside is going to be useful, not just in tracing the origins of life on Earth, but also in looking for it on other planets.

“As we also find similar environments on Mars, the study also has implications for astrobiology and the chances of finding life beyond Earth,” says Cavalazzi.

Deepest shipwreck ever found discovered at nearly 7,000 meters below sea level
Researchers finally tracked down the source of the deadly Pacific Ocean ‘blob’
NASA launches nanosatellite in landmark mission to return to Moon
‘Cradle of Humankind’ fossils may be a million years older than previously thought
Voids made by dying stars have been detected in our galaxy’s interstellar gas