A dead jellyfish that recently washed up on a beach in the UK shows off its last meal – a whole, and rather surprised-looking, fish – through its translucent belly, stunning photos reveal.

The jelly is a compass jellyfish (Chrysaora hysoscella), named for its brown, V-shaped markings that look like the lines on a compass. The juvenile fish inside has yet to be identified.

Local photographer Ian Watkin spotted the bizarre blob during his morning dog walk near Padstow in Cornwall on August 4, according to The Daily Mail. “It’s not something you see every day,” he said.

Related: 13 bizarre things that washed up on beaches

Juvenile fish have been known to seek shelter within the tentacles of jellyfish.

However, the protector turned predator for this particular fish, as experts think it was stung to death by the jelly and would have been slowly digested in its rudimentary stomach, known as a coelenteron, if the jelly had not washed ashore, according to Cornwall Wildlife Trust. 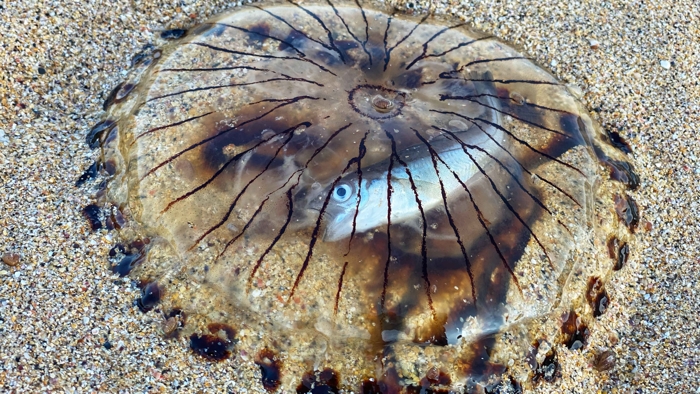 “Often jellyfish are used as nurseries by juvenile fish as they hide amongst their tentacles for protection from predators,” Cornwall Wildlife Trust said in a Facebook post.

“Unfortunately, this one seems to have been stung and became lunch for the compass.”

Compass jellyfish grow to around 12 inches (30 centimeters) in diameter and are commonly spotted in British waters between May to October. They feed on small fish and crabs, as well other jellyfish, and their sting can be very painful but not lethal to humans, according to the Cornwall Wildlife Trust.

The one-of-a-kind picture was fortuitously taken during National Marine Week, an initiative set up by the Wildlife Trusts – a group of regional conservation groups in the UK – to highlight the unique marine life around the British coastline.

Six bizarre feeding tactics from the depths of our oceans

This Species of Carnivorous Plant Evolved Into a Toilet And Is Now Winning at Life
Scientists Create Shapeshifting Humanoid Robot That Can Liquefy And Reform
Archaeologists Find Hidden Ruins of ‘Complete’ Roman-Era City in Egypt
Mysterious White Clouds Keep Popping Up Near The Bahamas, And No One Knows Why
‘Extraordinarily Close’ Asteroid About to Zoom Past Earth, NASA Says