Baby jumping spiders have vision that’s almost as extraordinarily good as the grown-ups, scientists have discovered – despite the baby spiders being around a hundredth of the size. A new study reports on how this feat of biological engineering is achieved.

The teeny tiny spiderlings pack the same number of light-capturing photoreceptors into their four pairs of eyes as the adults do. The difference lies in size, not number: baby spiders have smaller receptors, and they’re packed more closely together.

It helps to explain why very young jumping spiders (Phidippus audax) can hunt down and catch prey just as effectively as older members of the species, and could teach us more about the evolution of eyesight in animals and insects. 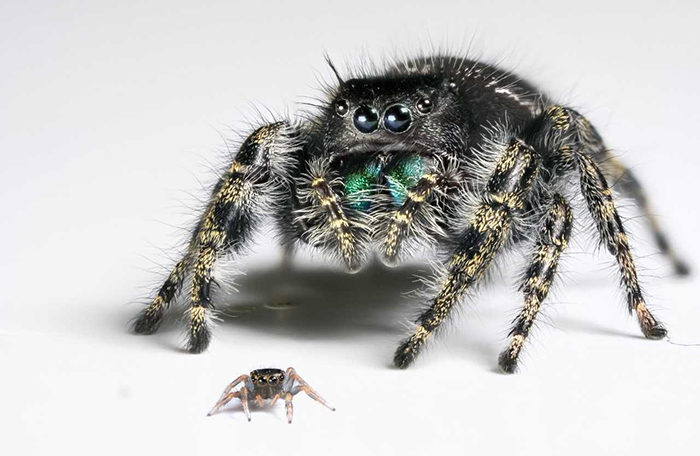 “Spiderlings can adopt prey-specific hunting strategies,” says biological scientist Nathan Morehouse, from the University of Cincinnati. “They can solve problems. They’re clever about navigating their environment.”

“This suggests their eyes are providing as much high-quality information when they’re small as when they’re large. And that was a puzzle.”

The team of researchers solved the puzzle by carefully building a customised micro-ophthalmoscope – not unlike the tool used by eye doctors – to peer into the peepers of baby jumping spiders. It took years to refine, but it gave them an unprecedented look into how the spider’s eight eyes developed from birth.

Spiderlings were found to have the same 8,000 photoreceptors in their eyes as the adults, but at a smaller size. Many of the cells are shaped like cylinders too, to cram in more side by side, and maintain the ability to distinguish objects at a distance.

“For humans, it takes three to five years before babies can reach the visual acuity of adults,” says biologist John Thomas Gote, from the University of Pittsburgh. ”Jumping spiders achieve this as soon as they exit the nest.”

“What intrigued me most was learning about just how well jumping spiders could see, despite their incredibly small size. For example, cats and jumping spiders can see the world in surprisingly similar detail.”

Based on a microscopic analysis or histology of the spider eyes, the team found the arachnids start life off with eyes that are much bigger in proportion to the rest of their bodies – in other words, the eyes don’t have as much growing to do.

It’s a known growth pattern called negative ontogenetic allometry, which can also be seen in the feet of puppies: dogs grow into their feet in the same way the P. audax spiders grow into their eyes.

These smaller photoreceptors are compromised in some ways though: baby jumping spiders can’t see as well in the dark, for example, because their smaller, still-growing eyes can’t capture as much light. They’re “a bit stumbly” in their movements, Morehouse says.

Together with other colleagues, Morehouse is now busy working on a related jumping spiders projected sponsored by the National Science Foundation, looking at the habitats of the insects and the evolution of colour vision.

You can follow along with the project on Twitter and on Instagram, with South Africa, Australia and Colombia next on the itinerary after this summer’s trip to Singapore.

“It was a massive success,” says Morehouse. “We encountered at least three species brand new to science. And we found described species for which there were no previous records in Singapore.”

The findings have been published in Vision Research.

10 Days After Its Launch, Orion Has Successfully Entered Lunar Orbit
Pendants From Stone Age Graves Revealed to Be Made of a Gruesome Material
There’s a Weird Link Between Teeth And The Evolution of Pregnancy
Colossal Exoplanet Is One of The Most Massive Super-Earths Ever Discovered
Two Black Holes Met by Chance, And It Created Something Never Seen Before