Life can get a little blue beneath the ocean’s surface. Warmer colors quickly fade the deeper you go, leaving a meager palette of just a few short wavelengths to light up the landscape.

To stand out in the gloom, many marine animals have evolved ways to make their skins and shells radiate hues of green, yellow, and red by soaking up shorter wavelengths and re-emitting them in a more stretched-out form.

The tropics are positively overflowing with countless examples of crustaceans, nudibranchs, anemones, and fish all using their own varieties of biofluorescent pigments to transform dull old aquamarine into something to be seen.

Approaching the Arctic Circle, life is anything but an octopus’s garden of delight. After all, why go to the effort of dressing up if long winter months are just going to cloak you in darkness anyway?

American Museum of Natural History curator John Sparks and his colleague, marine biologist David Gruber, wondered if the summer’s long days provided an incentive for any Arctic animals keen to give glowing a go.

“The light regime at the poles provides for winter months of near-total darkness, where biofluorescence would not be functional,” says Gruber.

“But given the summer months with the midnight Sun, we hypothesized that it could be present.”

An expedition to the coastal waters of eastern Greenland in 2019 provided a solid answer in the form of two juvenile specimens of variegated snailfish (Liparis gibbus).

These small, deep water animals are typically found in the dimly lit waters between 100 and 200 meters (330 to 660 feet) beneath the surface, chowing down on amphipods and crabs.

Placed under blue light back in the lab, specimens of the young snailfish shone in brilliant greens and deep reds, their eyes and parts of their body glowing profusely in ways never seen in any Arctic animal before.

You can check out one swimming about in the clip below.

It was the first example of a fluorescing Arctic animal, proving long periods of night were no obstacle to finding color for those that needed it.

That wasn’t the only surprise, though.

In most cases, marine fish only tend to fluoresce in a single color, a fact that would clearly come as news to the young snailfish. 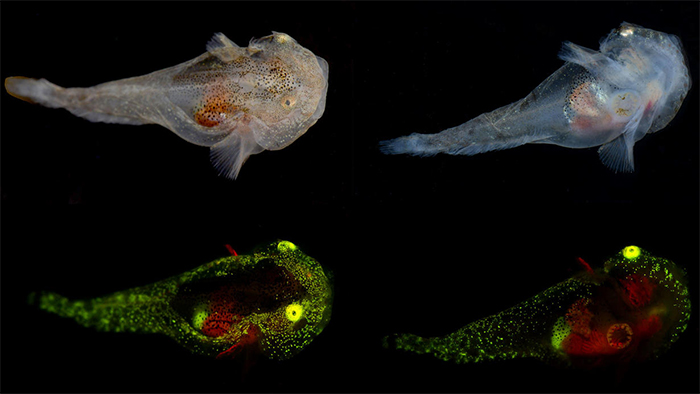 “Overall, we found marine fluorescence to be quite rare in the Arctic, in both invertebrate and vertebrate lineages,” says Sparks.

“So we were surprised to find these juvenile snailfish brightly fluorescing in not just one, but two different colors, which is very unusual in a single species.”

It’s entirely possible that there are even more specimens in the cold depths to the far north or south, which are yet to have their fluorescence captured. Further expeditions and more intense searches could see this exclusive club grow in the future.

For now, two lonely examples of glowing fish just don’t go far enough to disprove the generalization that the Arctic’s long dark disfavors bioluminescence, even if it does demonstrate the possibility.

In fact, other examples of Arctic fish closely related to fluorescing tropical species, such as scorpionfish and flatfish, were found to glow very weakly (if at all), making it clear fluorescing is just not a worthwhile strategy for most life at the poles.

Exactly why these two snailfish have evolved the talent, in stark contrast to virtually every other Arctic animal, isn’t clear.

Manipulation of light and color has a litany of uses in the ocean, from signaling and communication to protecting the organism from fluctuations in sunlight.

Exactly how any of this might benefit life in different marine ecosystems is just one more mystery for biologists to solve.

“We are now focusing our efforts on determining the function of fluorescence in various fish groups, including catsharks, where we have shown that bright green fluorescence enhances contrast in their pigmentation pattern, making it easier for individuals to see each other at depth,” says Sparks.

This research was published in the American Museum Novitates.

Intriguing Meteorite From Mars Reveals ‘Huge Organic Diversity’, Scientists Say
Stunning Green Comet Will Be Closest to Earth Today, at Peak Brightness
This Small Australian Marsupial Is Quite Literally Dying For Sex
A 17th-Century Aristocrat Had a Crafty Secret For Keeping Her Teeth
Scientists Reveal The Most Precise Map of All The Matter in The Universe