Record heat and growing wildfires are creating firestorms that can generate their own lightning in the skies above British Columbia, Canada.

As heat and smoke from large fires rise skyward, they can create firestorms comprised of what are known as pyrocumulonimbus clouds. These thunderheads produce their own weather, including tornadoes in rare cases, which can then spark new fires. It’s a vicious cycle.

Temperatures in Lytton, 153 km (95 miles) south of Vancouver, hit 121.2 degrees Fahrenheit (49.5 degrees Celsius) on Tuesday – a new national record. The heat wave preceded a wildfire that prompted the town’s mayor to issue an evacuation order for all 250 residents. As of Thursday morning, the 20,000-acre blaze had burned 90 percent of Lytton, according to local outlet City News. Speechless on this one … had thought it resembled in some ways the #CreekFire but these pyrocumulonimbus wildfire plumes are on a completely different level via @weatherdak https://t.co/L4st9zia24

If you spot a bank of thick-looking thunderstorm clouds above wildfire smoke, those are almost always pyrocumulonimbus. Another name for these “fire clouds”, according to NASA, is cumulonimbus flammagenitus – the second word is Latin for “created from flame”.

In general, thunderstorms form when lots of warm, moist air from the ground rise into the sky. As it enters the lowest part of the atmosphere, that air cools, and then sinks closer to Earth – where it warms up again, and subsequently rises. That cycle of rising and falling air is known as convection, and births cumulonimbus, or thunder, clouds.

But when that heat and moisture rise from a smoky wildfire rather than the ground, the convection creates pyrocumulonimbus clouds. 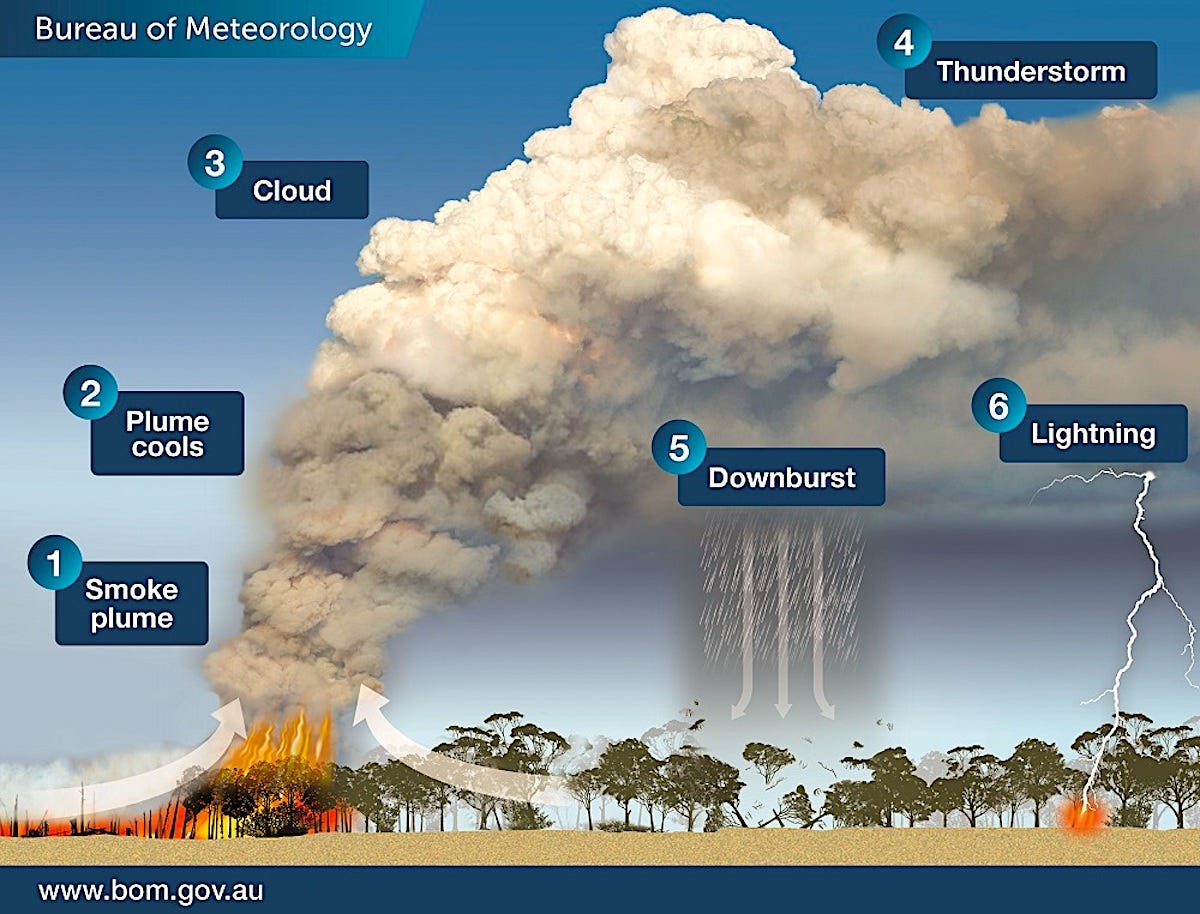 These anvil-shaped clouds can generate rain like other thunderstorms. Often, though, they unleash powerful, blasts of air known as “downbursts”, rather than water droplets. In pushing dry air back down toward the ground, these downbursts can scatter a blaze’s embers and smoke across large distances. That fuels the flames that generated the storm in the first place.

NASA describes pyrocumulonimbus storms as the “fire-breathing dragon of clouds”. They can also generate hundreds of lightning strokes, which in turn can spark more blazes.

In September 2020, the Creek Fire in California created one of the largest types of these clouds ever seen in the US – It measured 175,893 acres, or 275 square miles, in size (an area more than three times the size of Seattle). 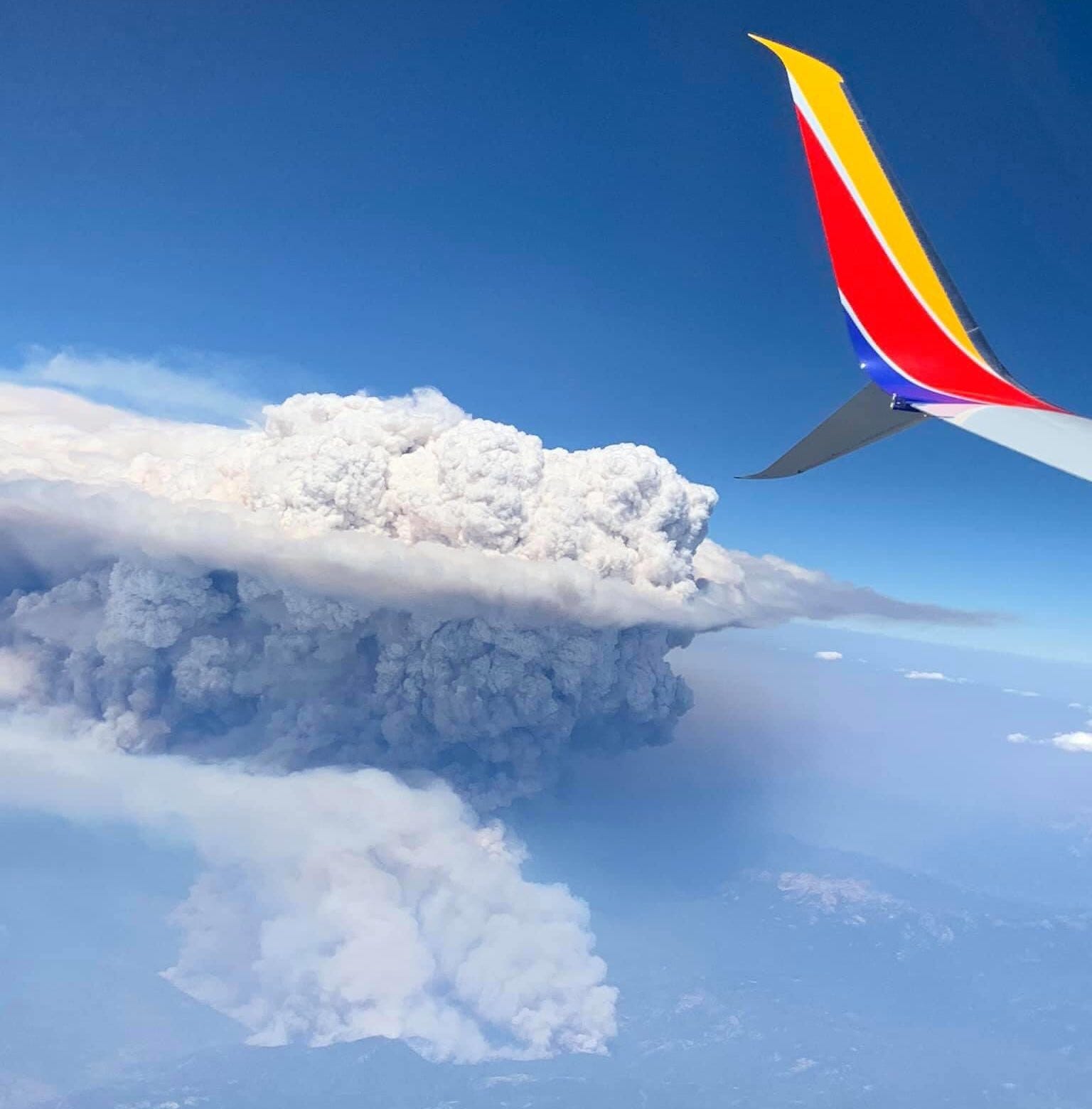 Pyrocumulonimbus cloud over the Creek Fire in California in 2020. (Thalia Dockery/Business Insider)

Sometimes, if the convecting air in a pyrocumulonimbus cloud bank forms a swirling, circular column, the storm can morph into a “fire tornado” – a twister of fire.

This happened outside Canberra, Australia in 2003, after a bushfire burned for two weeks around the city.

Fires can generate more than one firestorm. In February and March 2009, enormous bushfires burned 4,400 square km (1,700 square miles) of southeastern Australia, and generated three separate pyrocumulonimbus storms – some of which reached heights of 14 km (8.6 miles) – in the skies above Victoria. Climate change could play a role

Rising temperatures and drier air are associated with more frequent and more intense wildfires. And as wildfires increase in size and severity, fire-generated storms, too, are becoming more common.

In 2002, Canada, the US, and Mexico saw about 17 such storms in total. About two decades later, the average number of annual pyrocumulonimbus events had jumped to 25 in western North America alone, Yale360 reported.

These storms can extend so high that they penetrate the stratosphere – a layer of the atmosphere that starts 50 km (30 miles) up – and funnel smoke from the ground into the sky. It can stay up there for months or even years at a time.

A 2018 study found that a large pyrocumulonimbus cloud sends so many smoke particles into the stratosphere that it’s comparable to a mid-sized volcanic eruption.

NASA Rover Encounters Spectacular Metal Meteorite on Mars
A Hidden Food Web Exists in The Desert, And It Thrives on Death
We Can Now Hear The ‘Sound’ of One of The Most Beautiful Stars
Scientist Accidentally Discovers The Oldest Brain of Any Vertebrate
Astronomers Studied More Than 5,000 Black Holes to Figure Out Why They Twinkle