Baby loggerhead turtles have a lot standing between them and adulthood. The rolling hills of sand outside the comfort of their nests, not to mention the birds, sharks and other animals looking for a meal. Two heads on one body only makes the journey that much harder.

A sea turtle patrol on Hilton Island in South Carolina has recently turned up a rare double-headed hatchling, struggling to keep up with its brothers and sisters.

“Only the second time I recall in 15 years finding one. He was alive and well; however, could not crawl due his shell being abnormally shaped.” 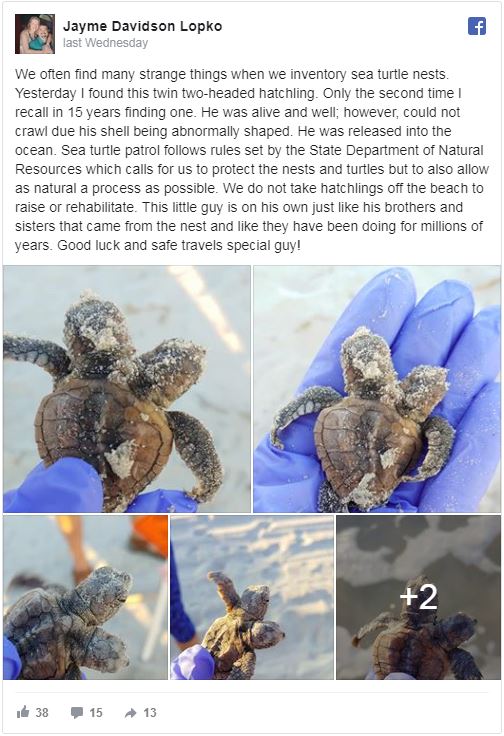 Fondly named Squirt and Crush, the hatchling is a species of loggerhead turtle. Under the US Endangered Species Act (ESA), all populations of this species are currently listed as endangered or threatened.

Sea patrol groups all over the world help protect this vulnerable animal by monitoring its hatcheries and preventing threats, while letting nature take its course as the tiny animals travel into the sea.

While it’s not unheard of to find a double-headed turtle among a nest’s inventory, it’s still quite the discovery.

“This mutation is more common in reptiles than in other animals but it is still very rare,” explains a Facebook post from Sea Turtle Patrol Hilton Head Island.

“As with other live hatchlings found during a nest inventory, this hatchling was released to the ocean.”

From here onwards, the creature is on its own. A hatchling’s chances on the beach are grim, with constant threats from hungry birds, crabs and small mammals. But once they’re in the water there’s no escape from danger, as seabirds and fish pose just as much of a threat.

The reality is, few baby turtles make it to the end of the road; somewhere between one in 1,000 and one in 10,000 are estimated to actually survive to adulthood.

The chances for a double-headed turtle are no doubt even worse. When another bicephalic hatchling was found in Florida, an expert told National Geographic that while it could survive, its odds were very low.

Being adorable, it seems, doesn’t protect you from the uncaring forces of nature. Squirt and Crush will need all the luck they can get.

Tiny Bubbles of an Ancient Ocean Found Trapped Inside Rocks in New York
Octopus Brains Evolved to Share a Surprising Trait in With Our Brains
We Finally Know How Black Holes Produce The Most Brilliant Light in The Universe
There’s a Weird Link Between Teeth And The Evolution of Pregnancy
Crocodiles Seem to Be Thriving in a Toxic River That’s More Like a Sewer. Here’s Why