We now have direct proof that ancient insects were also prey to horrifying parasitoids. Scientists painstakingly studyied 1,510 fossilised fly pupae from the Palaeogene, and discovered tiny fossilised wasp larvae inside 55 of them.

Together, they include four new species that were previously unknown to science.

Endoparasitoid wasps, conceptually, are some of the creatures that are most horrifying to humans. They lay their egg inside a host, where it will slowly incubate. When it comes time to “hatch”, they’ll burst from their still-living host, killing it, and often making their first meal of the dismembered remains.

Grisly though it is, it’s an incredibly successful survival tactic. But tracing its origins is something of a challenge.

This is because the fossil record of such creatures is hard to come by. There are fossilised wasps, of course, and fossilised flies. But the timespan in which parasite and host interact is relatively short.

And, of course, you have to have someone who thinks to go looking for them, with the tools to do so.

This is where entomologist Thomas van de Kamp of the Karlsruhe Institute of Technology, Germany, enters the picture. Having already applied synchrotron X-ray microtomography to study fossilised beetles, van de Kamp turned his attention to a more enigmatic – and largely ignored – group of fossils. 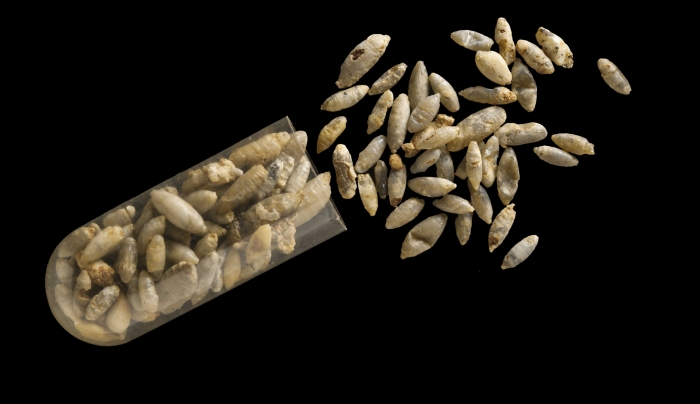 Excavated in the Quercy region of South-Central France at the end of the 19th century, the fossils consist of three-dimensional fly pupae dating back to the Palaeogene, between 66 and 23 million years ago. Over the intervening millennia, the pupae mineralised, with their organic material slowly replaced by stone.

One of these had been dissected for a 1944 paper, revealing a parasitoid wasp within; but, since then, the fossils hadn’t been analysed. But then…

“In 2016, palaeontologist Achim Schwermann, then working at the University of Bonn, sent me 29 of these pupae for scanning,” van de Kamp wrote in a blog post.

“I remember when I was sitting at the imaging beamline of the KIT light source, carefully observing X-ray projections during acquisition. I admit I was already a little bit bored after nine scans revealed nothing but stone. Then scan No. 10 happened.”

Inside the 3 millimetre shard of stone was a parasitoid wasp – unmistakeable. The team used this find to obtain a collection of the pupa fossils from a number of museums. Then, using synchrotron X-ray microtomography, with the researchers working in round-the-clock shifts, the 1,500 samples were scanned in just four days.

Therein, the researchers found the 55 wasps, preserved in stone inside their stone hosts, like a ghastly and wonderful prehistoric matryoshka doll.

So perfect was their preservation – including microscopic antennae and setae, and in some cases delicate wings, indicating readiness to break free – that the team was able to characterise four new species.

Their names are Xenomorphia resurrecta (after the Xenomorph from the 1979 movie Alien, also a parasitoid), Xenomorphia handschini (after the author of that 1944 paper, entomologist Eduard Handschin), Coptera anka, and Palaeortona quercyensis.

The two Xenomorphia species were quite similar to each other. C. anka and P. quercyencis, on the other hand, had characteristics in their wings, antennae, and waists that may have suited them better to a ground-dwelling lifestyle.

The team thinks that, much like endoparasitoid wasps today, the pupae were discovered and pierced by mother wasps using an ovipositor, with which they implanted their eggs inside. But then some event – perhaps flooding due to rain – destroyed entire nests, ending the insects’ lives before they could even begin.

It’s a tragic end. But their tiny stone remains are filling in the blanks on the history of these fascinating creatures – and showing the value in resurrecting forgotten collections for further examination.

“Now is the time to uncover the hidden treasures.”

The research has been published in the journal Nature Communications.

Friends who ‘click’ have something peculiar in common: their smell
A Large-Scale Experiment Used Human Pee to Fertilize Crops. Here’s What Happened
Robots with flawed AI make sexist and racist decisions, experiment shows
There’s a surprising similarity between the brains of humans and octopuses
600,000-year-old artifacts reveal the identity of some of Britain’s oldest toolmakers