When we look at the way an object moves, humans are able to use this context to infer weight – whether it is light or heavy.

Now, New Caledonian crows have demonstrated the same skill – accurately gauging the weight of an object based on how it moves in a breeze.

They could be the first non-human animals known to have this ability, according to researchers from the University of Cambridge in the UK, the University of Auckland in New Zealand, the Max Planck Institute for the Science of Human History in Germany and Bertha von Suttner University in Austria.

Crows and ravens are pretty well known for their incredible smarts. In this experiment, psychologists sought to determine how well New Caledonian crows can infer weight.

“If we see one cardboard box blowing down the street in a breeze, and one remaining stationary despite gale force winds, we can infer which box is heavy and which is light,” the researchers wrote in their paper.

“This ability to draw inferences about an object’s properties through observation, rather than only through direct handling, is likely to be useful in a wide range of contexts.”

However, previous animal experiments, primarily with chimpanzees, showed that, while they can sort objects according to weight, are unable to infer the weight of an object based on observation.

This new experimental setup involved 12 crows captured from the wild, two objects and a fan.

The crows were divided into two groups, and each group was trained to use an object to obtain a treat. They were presented with heavy objects and light ones; for half the crows, dropping a heavy object into a tube would result in a treat from a box, opened remotely by a human, while the light objects did not; for the other half, the light object yielded a treat while the heavy object gave them nothing. 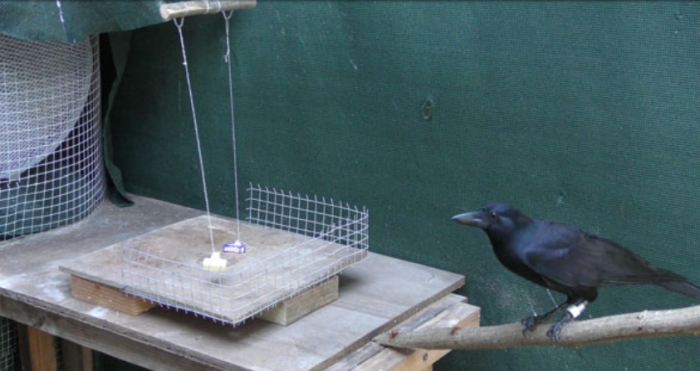 (Jelbert et al./Proceedings of the Royal Society B)

For the next stage, new objects that the birds had not seen before were suspended in front of a fan. The birds had to then observe the objects in two conditions: with the fan on, in which the lighter object was blown about; and with the fan off, in which both objects were stationary.

For three days, the birds conducted these observations, spaced a few hours apart.

Finally, the crows were put to the test. They were tested to see if they remembered whether they should be putting the heavy or light objects in the tube to get a treat (they did). Then, they were presented with the fan objects, as well as the treat dispenser box.

“Despite having no opportunity to handle these objects prior to test,” the researchers wrote, “birds touched the correct object (light or heavy) first in 73% of experimental trials, and were at chance in control trials. Our results suggest that birds used preexisting knowledge about the behaviour exhibited by differently weighted objects in the wind to infer their weight, using this information to guide their choices.”

It’s an amazing result – but perhaps not altogether surprising.

After all, crows have demonstrated understanding that they can use water displacement to raise an inaccessible object in a tube to an accessible height – and also that heavy objects displace water, while light ones just float on top.

Previous intelligence tests have also demonstrated that crows have abilities on a par with great apes (such as making compound tools), but in this one, our feathered friends have surpassed non-human primates.

Somewhere in a parallel Universe, Earth’s dominant species is the corvid equivalent of humans – and they’re already populating the stars.

The team’s research has been published in the Proceedings of the Royal Society B.

An Expert Explains Why The Radioactive Water Stored at Fukushima Should Be Released
Mysterious White Clouds Keep Popping Up Near The Bahamas, And No One Knows Why
Dogs Can Be Aggressive For Lots of Reasons, And One of Them Is You
Scans of Mummified ‘Golden Boy’ Reveal He Was Covered in Magical Protections
Shooting Tiny, High Speed Bullets at a Spacecraft Could Speed Up Travel to The Stars