Pollination is the trademark of flowering plants, with animal pollinators such as bees and birds sustaining the world’s food supplies – not to mention our cravings for coffee, honey, and macadamia nuts. But new research raises the possibility that animal-assisted pollination may have emerged in the sea, long before plants moved ashore.

The study, conducted by research groups based in France and Chile, is the first to document a seaweed species that depends on small marine crustaceans bespeckled in pollen-like spores to reproduce.

Since the red algae Gracilaria gracilis evolved long before land plants appeared, the researchers say their study shows animal-assisted pollination could have arisen some 650 million years ago in the oceans once a suitable pollinator appeared.

On land in seed-bearing flowering plants and gymnosperms, male reproductive cells, or gametes, take flight in the form of pollen grains, which are carried on wind, through water, or aback insects, to hopefully land upon a female counterpart somewhere far afield.

Scientists then discovered that mosses (a type of rootless, non-flowering plant classified as bryophytes) and some fungi also use animals and insects to facilitate reproduction, upending what they knew about animal-mediated pollination.

Though often debated, researchers thought it had originated in concert with terrestrial plants around 140 million years ago – or at least during the Mesozoic, which stretches back some 252 million years.

Only a few years ago, scientists discovered foraging marine invertebrates carrying seagrass sperm, throwing out to sea the long-standing theory that the oceans were devoid of pollinators.

Now, this new study from Emma Lavaut, an evolutionary biology graduate student at Sorbonne University in Paris, and colleagues, describes how small crustaceans called isopods, Idotea balthica, help fertilize a species of red seaweed, G. gracilis, that evolved around 1 billion years ago, long before the 500 million years ago when land-plants appeared.

“The study by Lavaut et al. has broadened both the variety and the history of animal-mediated male gamete transfer, taking the concept of pollination from [land] plants to algae and potentially pushing it back to the earliest evolution of marine invertebrates,” write Jeff Ollerton and Zong-Xin Ren, two ecologists at the Chinese Academy of Sciences’ Kunming Institute of Botany, in a perspective accompanying the paper in Science.

A type of photosynthesizing algae, seaweeds are only very distantly related to so-called true plants.

G. gracilis also differs from most other seaweeds in that their male gametes have no flagellum to propel them through water, left adrift in the ocean – unless they can snag a ridge on a passing critter, as this new work suggests they often do.

In a series of lab experiments, Lavaut and colleagues showed how the small marine isopods, which forage along strands of male G. gracilis, inadvertently collect the seaweed’s male gametes (spermatia) as they do, transferring them to female plants.

You can see in the image below, an idotea decorated with fluorescently-stained spermatia, which suggests that crustaceans may serve as pollinators. 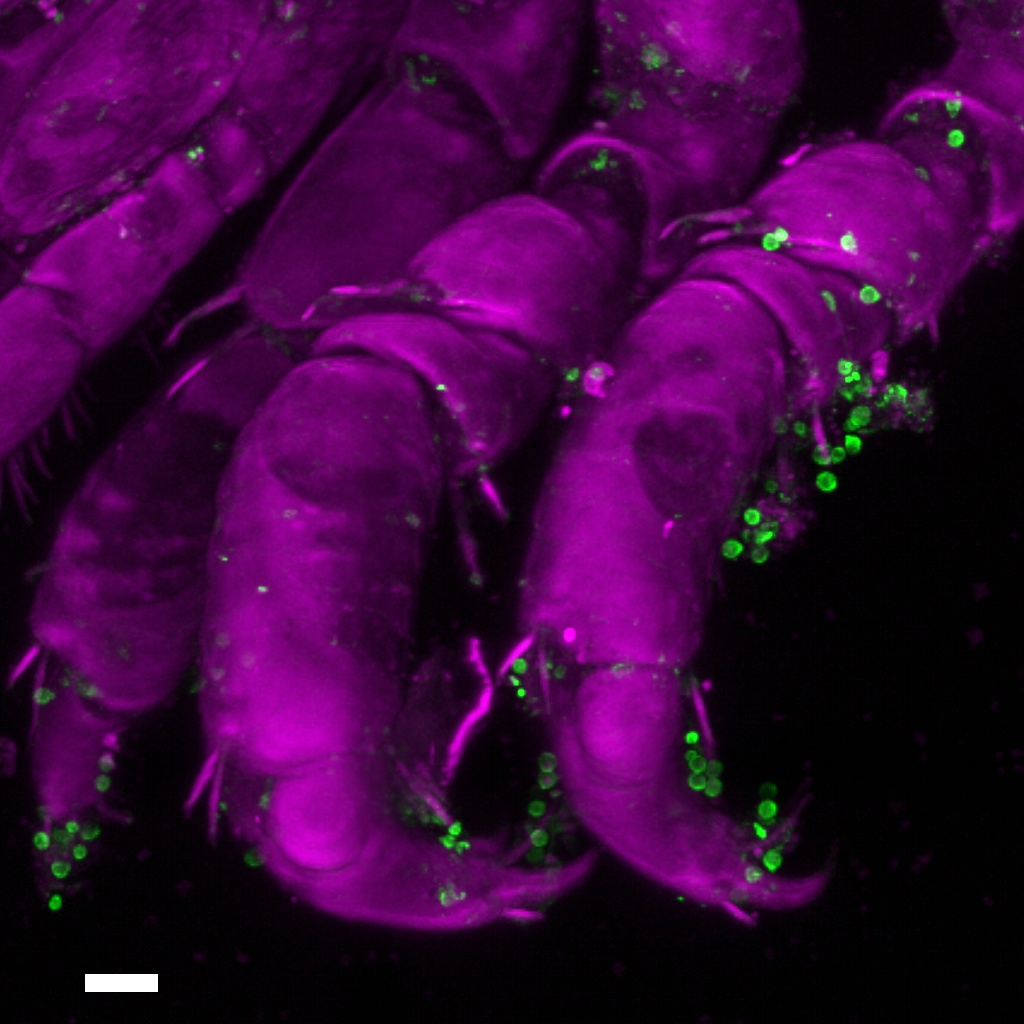 “Our results demonstrate for the first time that biotic interactions dramatically increase the probability of fertilization in a seaweed,” Lavaut and colleagues write.

Fertilization success was about 20 times higher in the presence of I. balthica than without the critters, the team found.

But they have not yet compared this crustacean pollination to the dispersal of pollen along water currents to know which plays a greater role.

The origins of plants using animal pollinators also remain wide open, considering the researchers only inferred this based on the evolutionary history of the animals involved.

Lavaut and colleagues think that the seaweed provides habitat, shelter, and plentiful food for grazing idoteas. In return, not only do the small crustaceans help G. gracilis reproduce, but their appetite for parasite-like plants that colonize G. gracilis fronds actually boosts the seaweed’s growth rates, the researchers found. 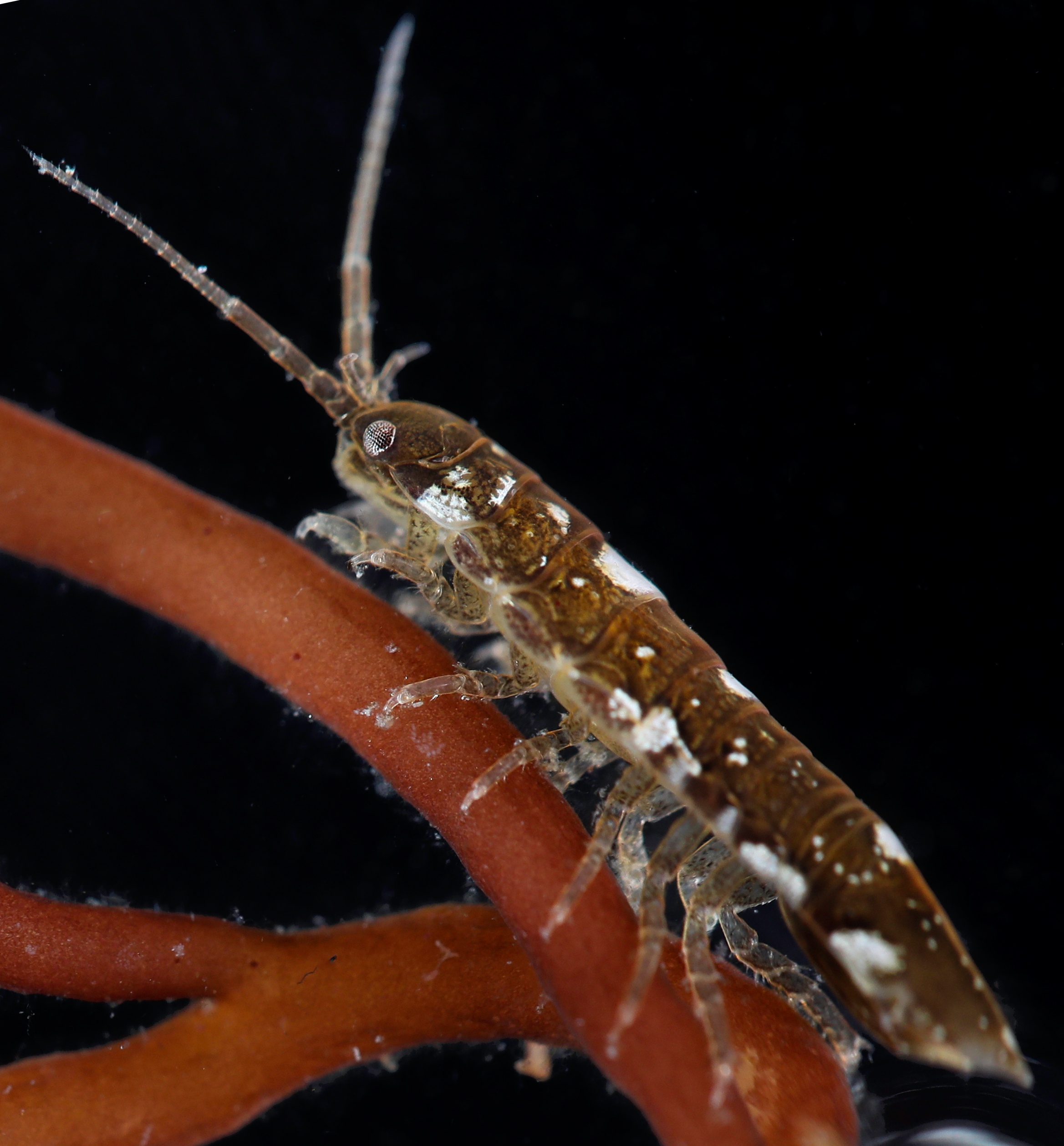 However, in a world of rapid human-caused climate change, these delicate mutualistic relationships between plants or algae and animals are threatened as much as the ecosystems which they sustain.

Seaweeds such as G. gracilis rely on still coastal waters to reproduce, when coastlines are being battered by storms and sea levels are slowly rising landward. Meanwhile, ocean acidification can weaken the exoskeletons of crustaceans – though this needs to be studied in isopods.

While the threat of global heating is abundantly clear, evolutionary-minded ecologists are still stumped as to what G. gracilis did before I. balthica appeared on the scene, since the isopods are not nearly as old as the algae, evolving a ‘mere’ 300 million years ago.

Although they most likely just relied on ocean currents, “how these seaweeds were reproducing before this is a mystery,” explain Ollerton and Ren.

If science has taught us anything, it’s that we should always prepare ourselves for more surprises. Recent estimates from Ollerton suggest that only one-tenth of the more than 300,000 known species of animal-pollinated flowering plants have had their pollinators documented.

So which species are working their magic? “No doubt many more revelations awaiting the careful observer of species interactions,” Ollerton and Ren conclude.

The study was published in Science.

The Universe could ‘bounce’ for eternity. But it still had to start somewhere
Minor Google meltdown exposes the world’s utter reliance on a single tech company
Every baby sea turtle in Florida seems to be female. We warned you, scientists say
This Artificial Synapse Can Run a Million Times Faster Than Ones in The Human Brain
New Predictions Reveal The Fate of The World’s Biggest Ice Sheet if We Don’t Act