In the last 260 million years, dinosaurs came and went, Pangea split into the continents and islands we see today, and humans have quickly and irreversibly changed the world we live in.

But through all of that, it seems Earth has been keeping time. A new study of ancient geological events suggests that our planet has a slow, steady ‘heartbeat’ of geological activity every 27 million years or so.

This pulse of clustered geological events – including volcanic activity, mass extinctions, plate reorganizations and sea level rises – is incredibly slow, a 27.5-million-year cycle of catastrophic ebbs and flows. But luckily for us, the research team notes we have another 20 million years before the next ‘pulse’.

“Many geologists believe that geological events are random over time,” said Michael Rampino, a New York University geologist and the study’s lead author.

“But our study provides statistical evidence for a common cycle, suggesting that these geologic events are correlated and not random.”

The team conducted new analysis on the ages of 89 well-understood geological events from the past 260 million years.

As you can see from the graph below, some of those times were tough – with over eight of such world-changing events clustering together over geologically small timespans, forming the catastrophic ‘pulse’. 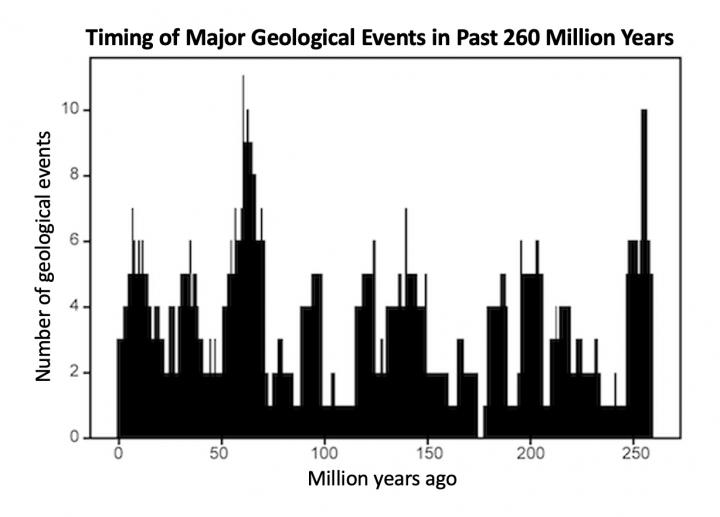 “These events include times of marine and non-marine extinctions, major ocean-anoxic events, continental flood-basalt eruptions, sea-level fluctuations, global pulses of intraplate magmatism, and times of changes in seafloor-spreading rates and plate reorganizations,” the team writes in their paper.

“Our results suggest that global geologic events are generally correlated, and seem to come in pulses with an underlying ~27.5-million-year cycle.”

Geologists have been investigating a potential cycle in geological events for a long time. Back in the 1920s and 30s, scientists of the era had suggested that the geological record had a 30-million-year cycle, while in the 1980s and 90s researchers used the best-dated geological events at the time to give them a range of the length between ‘pulses’ of 26.2 to 30.6 million years.

Now, everything seems to be in order – 27.5 million years is right about where we’d expect. A study late last year by the same authors suggested that this 27.5-million-year mark is when mass extinctions happen, too.

“This paper is quite good, but actually I think a better paper on this phenomenon was [a 2018 paper by] Muller and Dutkiewicz,” tectonic geologist Alan Collins from the University of Adelaide, who wasn’t involved in this research, told ScienceAlert.

That 2018 paper, by two researchers at the University of Sydney, looked at Earth’s carbon cycle and plate tectonics, and also came to the conclusion that the cycle is approximately 26 million years long.

Collins explained that in this latest study, many of the events the team looked at are causal – meaning that one directly causes the other, thus some of the 89 events are related: for example, anoxic events causing marine extinction.

“Having said this,” he added, “this 26-30 million year cyclicity does seem to be real and over a longer period of time – it also is not clear what is the underlying cause of it!”

Other research from Rampino and his team have suggested comet strikes could be the cause, with one space researcher even suggesting Planet X is to blame.

But if Earth really does have a geologic ‘heartbeat’, it might be due to something a little closer to home.

“These cyclic pulses of tectonics and climate change may be the result of geophysical processes related to the dynamics of plate tectonics and mantle plumes, or might alternatively be paced by astronomical cycles associated with the Earth’s motions in the Solar System and the Galaxy,” the team writes in their study.

The research has been published in Geoscience Frontiers.