Sometime in the early Jurassic, an ancient squid-like creature speared a yummy lobster-like crustacean with its many hooked tentacles. Just as it began to dig into its meal, the eater became the eaten.

A much larger predator swooped in, tore a chunk out of the squid’s soft middle and dashed off, leaving the leftovers of this three-way feeding fest sinking slowly to the bottom.

Roughly 180 million years later, the fossilized scene has been discovered in a quarry in Germany, and after close analysis, archaeologists now think they’ve figured out who was at the top of the food chain.

According to experts, the extinct squid-like cephalopod, known as a belemnite, was most probably killed by an ancient crocodile, shark, or other large predatory fish.

Whatever it was, the predator didn’t stick around to finish its meal, likely because cephalopods have tough rostra – beaks that are hard, pointed and difficult to digest.

This means the hunter probably wasn’t an ichthyosaur, even though fossils of these extinct marine reptiles suggest they were particularly skilled at picking around the hard areas of belemnites. Their stomach contents only show the mega-hooks found on belemnite tentacles and no other hard structures.

Fossilized stomachs of marine crocodiles and predatory fish, on the other hand, suggest these creatures gobbled everything down, swallowing both the mega-hooks and the hard beaks of squid.

Yet eating the whole squid isn’t necessarily a good thing. A fossilized shark, also found in Germany from the Jurassic, was found with a whole pile of belemnite beaks in its stomach, and experts say these hard structures likely caused the shark’s death. The diagram below shows the extreme blockage they created in the creature’s stomach. 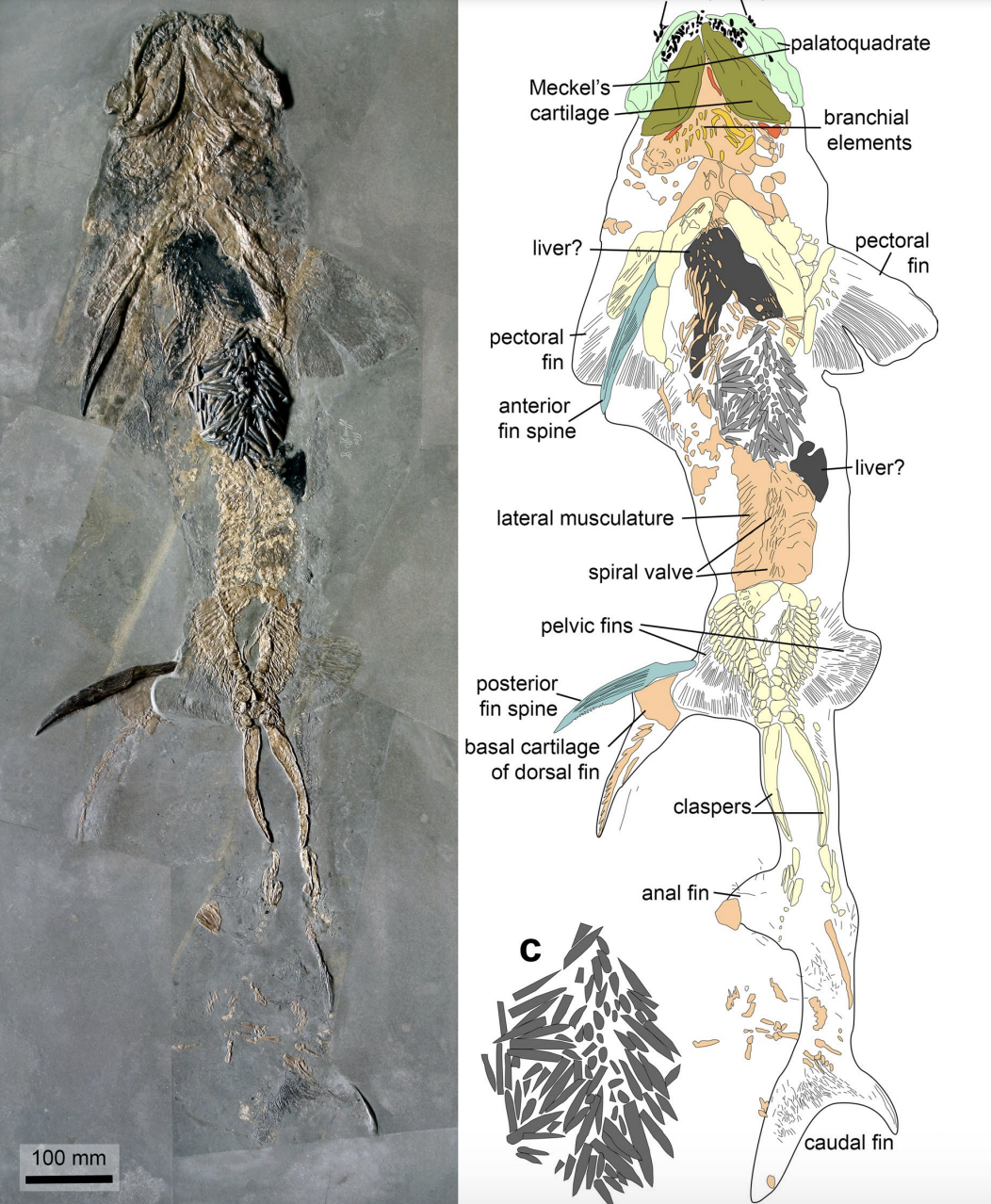 After some uncomfortable experiences, the authors suggest ancient sharks and crocs in the Jurassic learned to go after only the soft parts of their squid prey, choosing to drop the fins, rostrum, and mantle.

In the current fossil, for example, the belemnite has retained its rostrum and arms, but everything soft in between is gone. 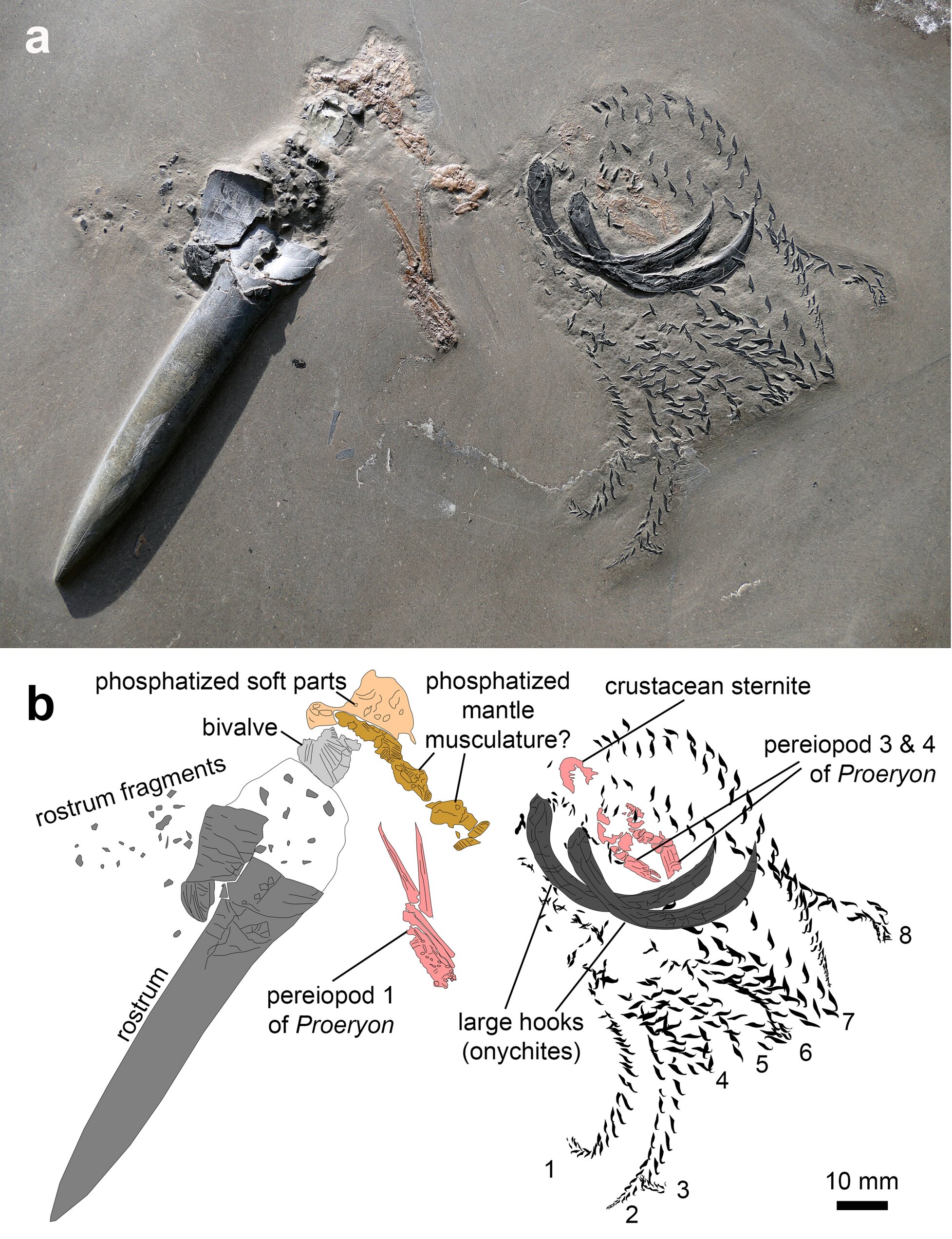 “Remarkably, most of the belemnite soft parts between the arm crown and the calcitic rostrum are missing,” the authors note.

A possible scenario explaining the fossilized remains has been illustrated below, showing a squid-like creature chewing on a crustacean while, in turn, a shark chews on it. 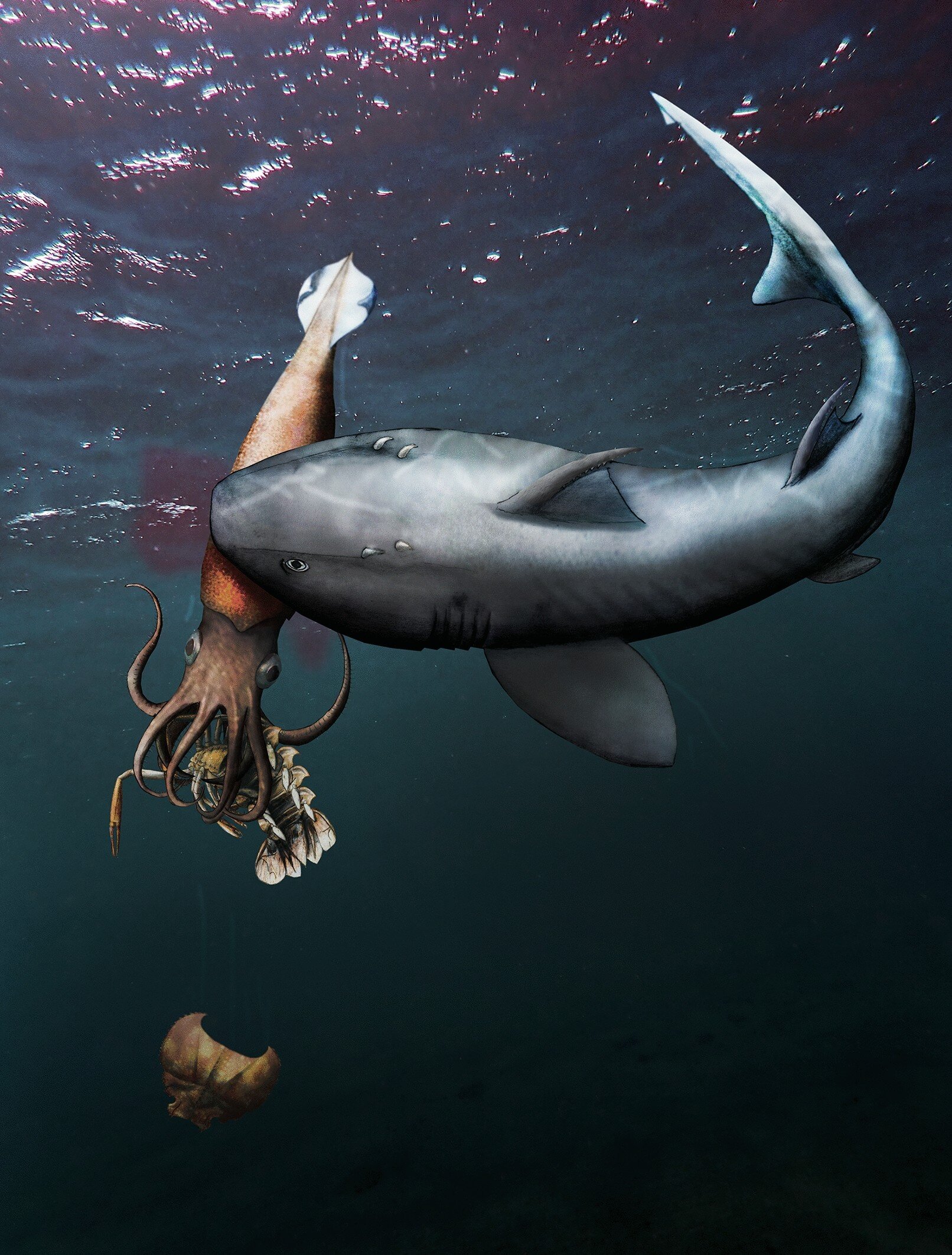 The team have classified their discovery as a ‘leftover fall’, which is sort of like a whale fall, except this one is caused by an ocean predator dropping all or part of its meal.

The result is a ‘pabulite’, a term which the authors of the new study have coined to describe a fossilized leftover fall. It’s a combination of the Latin word for food, pabulum, and the Greek word for stone, lithos.

Pabulites have been discovered numerous times over the years, and while solitary heads, fins and tails of ancient creatures might seem less valuable then a complete fossil, these incomplete remains can help us form a unique picture of the Jurassic food web.

The study was published in Swiss Journal of Palaeontology.

A Rare Green Comet Can Be Seen in The Sky, And It May Be Our Last Chance
New NASA Nuclear Rocket Plan Aims to Get to Mars in Just 45 Days
These Binary Stars Are So Close Together That Their Year Is Only 20.5 Hours Long
Sword Mistaken For Replica Is Actually An Ancient 3,000-Year-Old Weapon
Astronomers Just Discovered a ‘Bear’ on Mars