Scientists have found a 47-million-year-old fossilized fly with a bloated belly absolutely full of pollen.

The discovery is the first direct evidence that some species of ancient tangle-veined flies once fed on the microspores of several different species of subtropical plant.

“The rich pollen content we discovered in the fly’s stomach suggests that flies were already feeding and transporting pollen 47 million years ago and shows it played an important role in the pollen dispersal of several plant taxa,” says botanist Fridgeir Grímsson from the University of Vienna, Austria.

When most people think of a pollinator, they imagine a bird, a bee, or a butterfly. Very few consider the fly, even though it’s generally acknowledged to be the second most important insect pollinator.

Today, tangle-veined flies with short, tongue-like structures known as proboscises, have been utterly overlooked as potential pollen carriers. In fact, only modern nemestrinids with long sucking appendages have ever been observed feeding on tubular plants, and even then, only on nectar.

The new fossil, which was found in a disused quarry near Frankfurt, Germany, represents a novel species of ancient, short-proboscid fly (Hirmoneura messelense) that appears to have had quite the appetite for pollen.

The authors think this pollinating insect may once have even outshined bees.

Fossil records that reveal direct pollen feeding are extremely rare, but the last meal of this fly has been remarkably preserved. Under the microscope, its gut and stomach show traces of pollen from at least four plant families, including water willows and virgin ivy, which probably grew around the forest margins of an ancient lake. 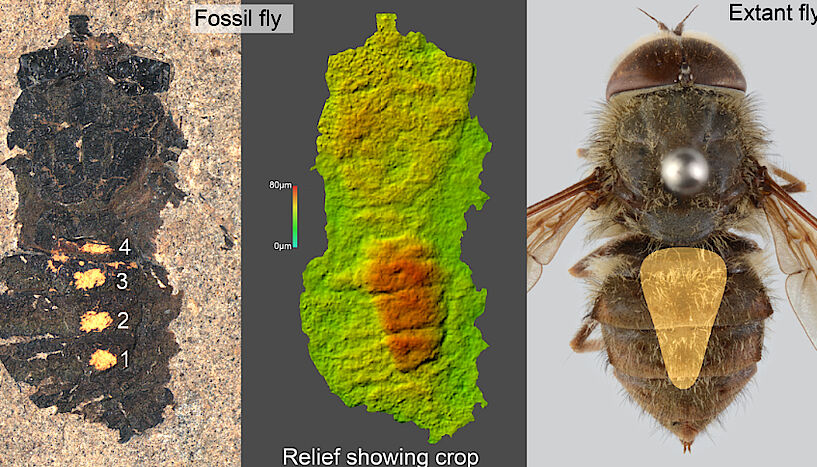 Fossilized fly and its gut and stomach contents. (Senckenberg)

The researchers could also see long hairs – also known as setae – on the fly’s thorax or abdomen. While no pollen was found on these hairs, the fact that these long bristles exist suggests they could also have transported pollen when the fly bounced from flower to flower.

Unlike other flower-visiting flies with long proboscises, which generally hover above plants to feed, this particular fly probably landed on the tops of flowers, “before engulfing pollen from anthers”, the team writes. In fact, the fly’s proboscis is so short, it’s not even visible. Researchers think it’s probably hidden within the insect’s head.

The flowers it seems to have fed on are usually packed tightly together, which would have allowed the insect to easily walk between them – eating one meal after another.

Three unknown pollen types in the fly’s tummy also suggest it fed on a mix of parent plants which grew in close proximity.

“It is likely that the fly avoided long-distance flights between food sources and sought pollen from closely associated plants,” explains Grímsson. 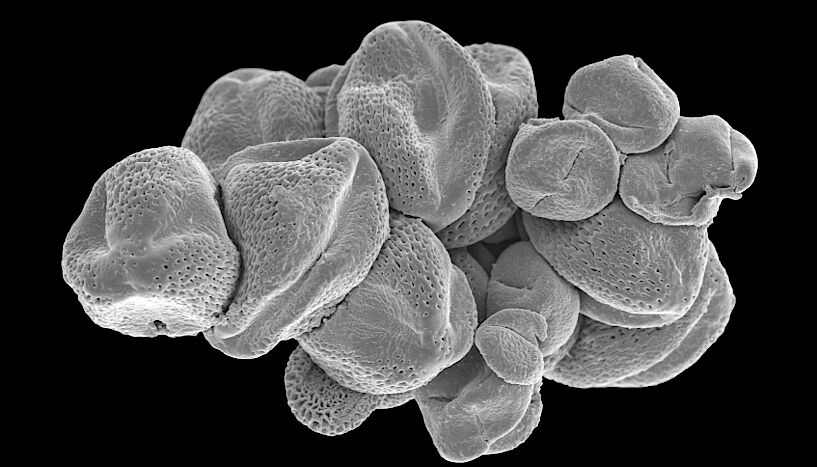 Fossil pollen from the stomach of the fly. (Fridgeir Grímsson)

While modern flower-visiting flies are not quite as efficient at transporting pollen as bees, they make up for it through sheer numbers. Investigation into these pollinators has long been neglected and studies are few and far between.

This new discovery supports an old hypothesis that in some modern tropical environments, flower-visiting flies might be at least as important as some pollinating bees – maybe even more so. The fact that we found pollen in the stomach of an ancient fly suggests this could have been an important role for the insect as far back as the Jurassic period.

Bacteria Can Use Plastic Waste as a Food Source, Which Isn’t as Good as It Sounds
People Who Don’t Exist Look More Real Than Actual People, Study Finds
Scans of Mummified ‘Golden Boy’ Reveal He Was Covered in Magical Protections
Sword Mistaken For Replica Is Actually An Ancient 3,000-Year-Old Weapon
Scientists Have a Plan to Turn Earth Into a Giant Observatory