Halfway between the east coast of Africa and Madagascar lies the remote island of Anjouan – a volcanic landmass born in ancient eruptions some four million years ago.

Because of Anjouan’s fiery origins, the entire island should be uniformly composed of volcanic basalt: a dark-coloured, lava-derived rock.

Should be. But isn’t.

For over a century, geologists have been documenting evidence of a different kind of rock that can be found on Anjouan. It’s a kind that doesn’t make sense, given the entire landmass ought to have spewed out of a volcanic rift in the ocean floor.

Varying reports of this lighter-coloured sedimentary rock – once described as sandstone in the 1960s – have been emerging since about 1900. In more recent decades, the specific mineral was identified as quartzite.

But the entirety of Anjouan was spawned out of a volcano, and quartzite – a converted form of sandstone (mostly quartz) – doesn’t come out of volcanoes. So what’s going on? 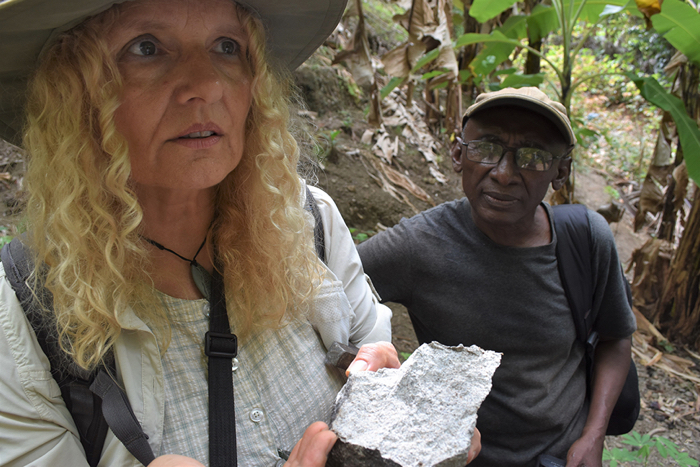 “This is contrary to plate tectonics,” says geochemist Cornelia Class from Columbia University.

“Quartzite bodies do not belong on volcanic islands.”

Last year, Class and fellow researchers voyaged to the remote island state, an autonomous member of the Union of the Comoros, to search for samples of this rock that shouldn’t exist.

It wasn’t hard to find. Within minutes of exploring, the group discovered pale quartzite cobbles lying around on the ground, in stark contrast to the grey-black basalt rocks that dominate the landscape. “It doesn’t look like anything that could have formed on an island like that,” Class told Live Science.

“There is nothing there that could form a quartzite.”

In their travels across Anjouan, they uncovered a “bread-crumb trail of quartzite chunks” as journalist Kevin Krajick, who was part of the expedition, reports at Columbia University’s State of the Planet blog.

The trail of quartzite led them up ridges, where they found quartzite blocks nestled among giant basalt boulders. They found a larger quartzite boulder when checking out the site of a reported quartzite discovery made in 2017.

Anjouan locals, seemingly bemused by the geologists’ quest, explained they had a simple use for the pale, common rocks. “We find these all the time when we’re planting manioc,” a local man named Ali Saindou told them. ”People use them to sharpen knives.”

Upon hearing that a trail of quartzite could be found all the way up Anjouan’s steep, mountainous terrain, the researchers got a sense of the scale of what they might be looking at.

“This thing is big,” said Class. “Much bigger than we thought. This is a major discovery.”

One day, after finding that a suspected quartzite lead was just a hunk of exposed basalt bleached white by the Sun, the researchers chanced upon the mineral motherlode: an elevated region where quartzite is so abundant, the soil itself was almost white in colour.

“It’s almost half a mountain,” Class told Live Science, estimating the size of the find, which still needs to be verified.

On that note, it’s worth pointing out that so far none of the team’s ongoing work has yet been been published or reviewed by their peers. But while the research remains a work in progress, Class already has a hypothesis for how these rocks that don’t belong nonetheless seem to be found basically all over this remote volcanic island.

The explanation begins hundreds of millions of years ago, when the ancient supercontinent Gondwana broke up, including what we now call Madagascar fracturing off the eastern coast of Africa.

Hypothetically speaking, it’s possible that when this great separation occurred around 165 million to 130 million years ago, a chunk of continental rock (including quartzite) split off from either Africa or Madagascar, and came to rest on the ocean basin that formed between them.

Then, somehow, about four million years ago, as a great volcanic eruption brought the island of Anjouan into the world, this ancient Gondwana orphan – a “lost part of the world”, now found – was brought back up again, intertwined with the basalt of the baby island.

If this wild hunch is right, it makes Anjouan the only volcanic island in the world harbouring an ancient, intact chunk of continent like this, as Krajick explains.

“This is what nature presents, sometimes,” Class explained to Live Science. ”It’s something we consider impossible, but then we find it, and once we find it, we have to explain it.”

To do that, the researchers are now conducting further analyses, dating both the quartzite, and trying to quantify exactly how much of it exists on the island.

The volcano that gave rise to Anjouan became extinct a long time ago, but there are still many unknowns that are yet to surface.

New Prototype Device Generates Hydrogen From Untreated Seawater
US Shoots Down Chinese Surveillance Balloon: What Can They Actually See?
We Can Now Hear The ‘Sound’ of One of The Most Beautiful Stars
Stunning Green Comet Will Be Closest to Earth Today, at Peak Brightness
Orcas Are Contaminated With a Forever Chemical Associated With an Unlikely Product