Here’s a mystery: Ancient fossils show animals originating from South America in the Antilles islands off Central America, but how did they get over the sea? The answer is via land masses that have long since sunk from view under the ocean, according to a new study.

These animals certainly couldn’t have swum across several hundred kilometers of the Caribbean Sea, so they either floated over on matted vegetation running down rivers, or there were once land bridges in place that have now vanished.

The new research backs the second hypothesis, suggesting that tectonic plate movements and the spreading and shrinking of glaciers over the course of millions of years could have provided a path for wildlife to travel over. 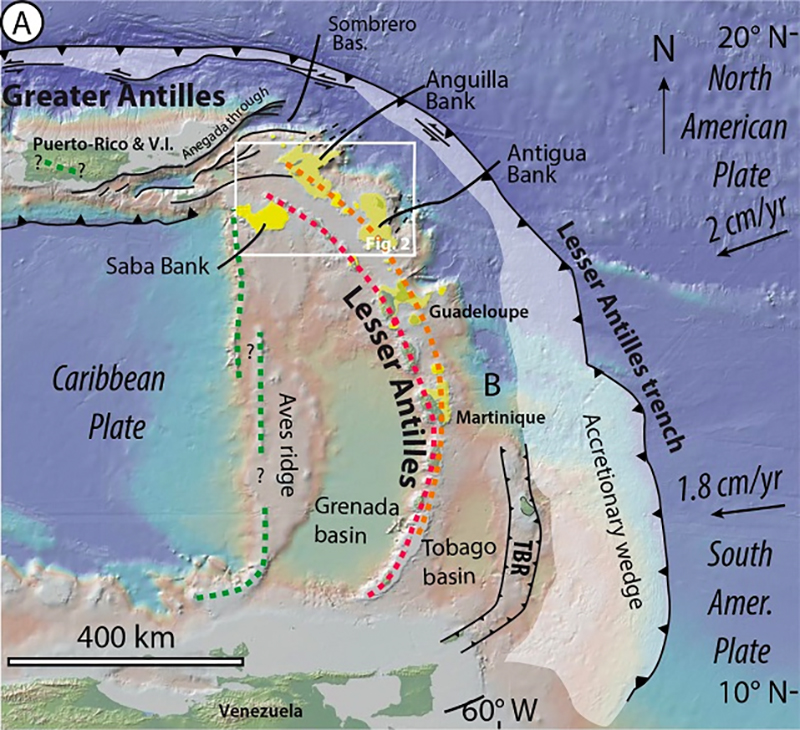 “The Caribbean, including the Greater and Lesser Antilles located at the northeastern edge of the Caribbean Plate, are regarded as one of the most important centers of insular biodiversity,” write the researchers in their published paper.

“Despite decades of studies, the phylogenetic origins and historical biogeography of this astonishing biodiversity remain, however, controversial.”

The team modeled some 40 million years of tectonic plate movement around the junction between the Lesser Antilles, the Greater Antilles, and the Aves Ridge underwater mountain, demonstrating how landmasses could be formed and broken down again.

The emergence and disappearance of these archipelagos and “mega-islands” would also have been affected by the rise and fall of the sea level, controlled by glacial melt – something else the scientists modeled across a period of 1.5 million years.

Researchers factored seismic data collected from the region over the last 40 years into the calculations, as well as the current geography of the islands. The team was able to work backwards to the late Eocene period, matching island shorelines with the era when they would have emerged from the ocean.

“These periods of emergence may have favored the existence of episodic mega-islands and transient terrestrial connections between the Greater Antilles, the Lesser Antilles, and the northern part of the Aves Ridge (Saba Bank),” write the researchers.

“During the Pleistocene, archipelagos, and mega-islands formed repeatedly during glacial maximum episodes.”

These land bridges are more common than you might think, existing for millions of years and then disappearing for millions more. There was once a connection between Russia and Canada, for instance, and between the UK and the rest of Europe.

While the idea of landmasses in the Antilles region has been proposed before, no one has looked in this much detail at this particular area. In the future, the researchers want to use the same techniques to extend their models southwards and cover the entire Caribbean Plate.

For now, there’s still work to be done around the Lesser Antilles – a more complete terrestrial fossil record and a better reconstruction of the ancient geography of the area between Guadeloupe and Venezuela is required to more accurately lay out the pathways that once existed.

“The role of the Lesser Antilles in the dispersal of land fauna during the last 40 million years must therefore be reassessed,” conclude the researchers.

The research has been published in Earth-Science Reviews.

Physicists Used Sound Waves to Give a Tiny Sun Its Own Kind of Gravity
Mysterious ‘Zone of Uncertainty’ Inside The Brain Reveals a Surprise
Astronomers Just Discovered a ‘Bear’ on Mars
A 17th-Century Aristocrat Had a Crafty Secret For Keeping Her Teeth
Dogs Can Be Aggressive For Lots of Reasons, And One of Them Is You