It might not be a happy ending, but in the circumstances, it’s the happiest we could have hoped for.

Tahlequah, aka the orca mother J35, has finally surrendered her deceased newborn calf, after carrying her lifeless body for seventeen straight days in an arduous display of animal grief and denial that made headlines around the world.

On Saturday, for the first time in two and a half weeks, the bereaved mother was seen swimming without her dead baby, as she chased a school of salmon with her pod-mates off the coast of British Columbia.

The solo appearance marks the only confirmed occasion observers have seen Tahlequah without the deceased calf since the infant was born, ending a heartbreaking, record-setting haul in which the mother pushed the limp baby girl along for an estimated 1,000 miles (about 1,600 km).

“Her tour of grief is now over and her behaviour is remarkably frisky,” explain scientists from the Centre for Whale Research, who monitor and study an endangered orca population called the Southern Resident killer whales (SRKW) in the Pacific Northwest.

“There had been reports from brief sightings by whale-watchers two days ago that J35 (Tahlequah) was not pushing the calf carcass in Georgia Strait near Vancouver, BC; and, now we can confirm that she definitely has abandoned it.”

The researchers explain the dead calf has likely sunk deep into the inland marine waters of the Salish Sea, meaning it’s uncertain whether scientists will get a chance to recover the body and investigate why the infant died.

Sadly, Tahlequah and her daughter enjoyed less than an hour swimming together after the calf was born, before the infant died of an unknown cause.

In circumstances like this, orcas are known to nudge along perished newborns for up to a week, preventing them from sinking by repeatedly propping them up on their foreheads in a desperate bid to keep them with the pod.

But nobody had ever witnessed this tragic and physically punishing phenomenon keep up for weeks and a thousand miles of heartbreak. 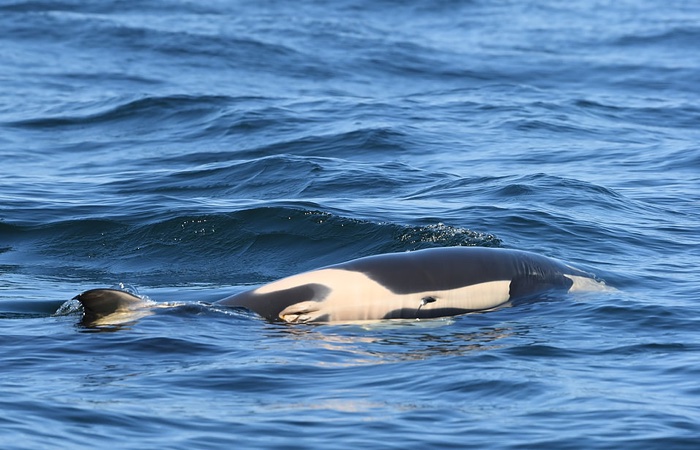 “If you’re a whale or a dolphin, it means that you have to go down and pick that animal up as it’s sinking, bring it to the surface, hold your breath for as long as you can and then basically dump your baby off your head in order just to take a breath,” orca biologist Deborah Giles from the University of Washington told The Washington Post.

“It’s real, and it’s raw. It’s obvious what’s happening. You cannot interpret it any other way. This is an animal that is grieving for its dead baby, and she doesn’t want to let it go. She’s not ready.”

Aside from the emotional impact, this behaviour can have physical consequences too, but new telephoto images taken by the Centre for Whale Research reveal Tahlequah appears to be in good physical condition, with no evidence of ‘peanut head‘ skull deformations incurred by the relentless pushing and not enough food.

While we can be relieved that J35 has finally relinquished her dead calf and is moving on with more normal orca behaviour, the sad reality is that some 75 percent of newborns in the SRKW population in the past two decades have failed to thrive – and Tahlequah’s calf, had she survived, would have been the first living offspring in three years.

The chief culprit, researchers say, is there isn’t enough salmon in the water to keep the orca population fit and healthy. Efforts are ongoing to turn that around and protect both the local salmon and orca populations, although nobody yet knows how effective those protections will be.

But for now at least, life goes on for Tahlequah.

“J35 frolicked past my window today with other J pod whales, and she looks vigorous and healthy,” founding director of the Centre for Whale Research, Ken Balcomb, told The Seattle Times.

“The ordeal of her carrying a dead calf for at least seventeen days and 1,000 miles is now over, thank goodness.”

Scientists Have Built a Macroscopic Tractor Beam Using Laser Light
This Species of Carnivorous Plant Evolved Into a Toilet And Is Now Winning at Life
There’s a ‘Lost City’ Deep in The Ocean, And It’s Unlike Anything We’ve Ever Seen
Physicists Break Record Firing a Laser Down Their University Corridor
Dogs Can Be Aggressive For Lots of Reasons, And One of Them Is You