The successful eradication of the first nest of Asian giant hornets ever discovered in the US made headlines last week, and now scientists have shared new details on the technology and techniques they’re using to counter the encroaching menace of this invasive pest.

The Asian giant hornet (Vespa mandarinia), often nicknamed the ‘murder’ hornet, is the world’s largest hornet, and is common in parts of Asia and Russia. It was never seen in North America until recently, however, when sightings since 2019 in both Washington State and British Columbia indicated the infamous insect had immigrated.

Ever since then, authorities have been trying to track down and terminate the giant hornet before it can establish a firm foothold in the region.

While the hornet and its long stinger can pose a danger to people, human fatalities are generally rare. The murderous overtones of the nickname pertain rather to the hornets’ tendency to attack and destroy honeybee hives, decapitating the insects in a vicious ‘slaughter phase’.

While some entomologists say fears over the dangers of the Asian giant hornet are overblown, agricultural authorities in the US have nonetheless been working hard for months to find nests and eliminate them before the murder hornet becomes widespread stateside.

Last week’s successful nest eradication in the town of Blaine, Washington was the result of a long effort to find the nest after repeated hornet sightings. But even if you can spot individual hornets, finding their nests can be a challenge, because they’re often built out of sight in forested areas, hidden inside trees or underground cavities.

To solve the puzzle, entomologists from the Washington State Department of Agriculture (WSDA) came up with a plan to capture a live hornet, affix a trackable radio tag to it, and then release the insect, following it back to its nest. 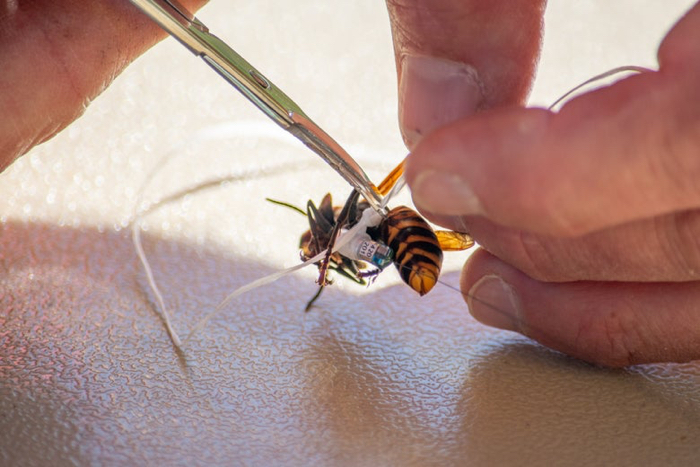 To pull off the scheme, WSDA researchers worked with colleagues at the USDA, who had already found success using similar radio tags to study spotted lanternfly movements.

After numerous failed attempts – where the scientists lost their quarry, or difficulties with the tag saw the tracker fall off the hornet – the bug-hunters realised their ultimate goal in late October.

The radio tag led the team to a dead tree, and WSDA managing entomologist Sven-Erik Spichiger noticed hornets entering and exiting the tree through a crevice several feet up the trunk.

The team successfully vacuumed out 85 hornets, catching 13 more with a net.

“I’m pretty confident as long as we can get live hornets, we can follow them back, and that really gives us a great tool in an overall eradication program,” Spichiger says.

That wasn’t the end of the story, though. Days after the nest elimination, the team cut into the portion of the tree containing the nest and discovered two queens, along with other worker hornets, larvae, and white-capped cells containing developing adults.

The capture is a win for the entomologists, but the team also points out the battle to contain the Asian giant hornets could play out over several years – as we still don’t know how many nests are already out there, nor how the insects will begin to move and spread in US regions.

“It’s hard to say how they will behave here compared to their native range, but the fear is that there are large apiaries of bees that could be sitting ducks, while as the hornets move south to warmer weather their colonies could grow larger,” WSDA entomologist Chris Looney told The Guardian.

“The object of our work is to avoid finding this out.”

Scientists Solve 100-Year-Old Mystery About How Plants Took Root in Land
Volcanoes May Have Transformed Venus Into a Blistering Hellscape
Ancient Traces of Burnt Food Reveal a Surprising Truth About The Paleo Diet
Man Keeps Rock For Years, Hoping It’s Gold. It Turns Out to Be Far More Valuable
Our Nearest Galactic Neighbor Engaged in ‘Cannibalism’ Again And Again, Study Finds