Scientists in Siberia have made an extraordinary find: the fossilised remains of an extinct baby Palaeolithic horse, in almost perfect condition.

Dug out from the permafrost in Siberia’s Batagaika crater – AKA the “Doorway to the Underworld” – the tiny colt is so beautifully preserved, it looks like it could be sleeping. But the equine died a long time ago – between 30,000 and 40,000 years, during the Upper Palaeolithic.

Discovered by local residents, the foal was excavated by scientists from Japan and Russia, and taken to the Mammoth Museum at the North-Eastern Federal University in Yakutsk. 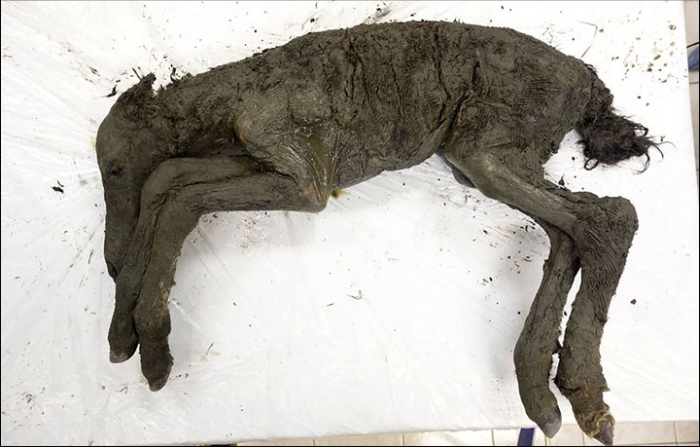 “This is the first find in the world of a prehistoric horse of such a young age and with such an amazing level of preservation,” said the museum’s laboratory head, Semyon Grigoryev.

The foal was aged just 2 to 3 months when it died, just 98 centimetres (38 inches) at its shoulder, and its dark brown coat, mane, tail and hooves are all intact. Even its internal organs were preserved by the permafrost, a layer of the ground that is permanently below freezing temperature.

The species, the researchers said, is genetically distinct from those now living in the Yakutia region. It was an Equus lenensis (also known as the Lena horse), which roamed the region in the late Pleistocene, now extinct and known from mummified remains found in the permafrost. 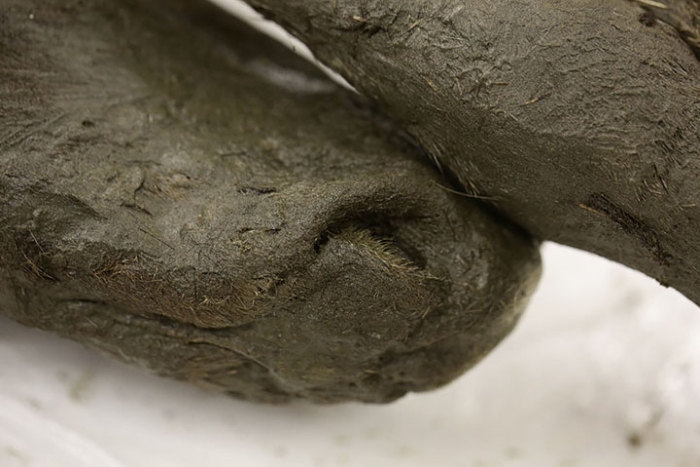 The researchers took samples of hair, liquid, biological fluids and soil samples from where the foal was found, to conduct a more extensive battery of tests, including a full autopsy to determine how it died.

Interestingly, there were no visible wounds on its body.

“Experts that took part in the expedition came up with a version that the foal could have drowned after getting into some kind of a natural trap,” explained Grigory Savvinov of North-Eastern Federal University.

In addition to determining this cause of death, the autopsy will tell the scientists more about how the foal lived. They plan, for instance, to analyse the contents of its stomach to find out what it ate. 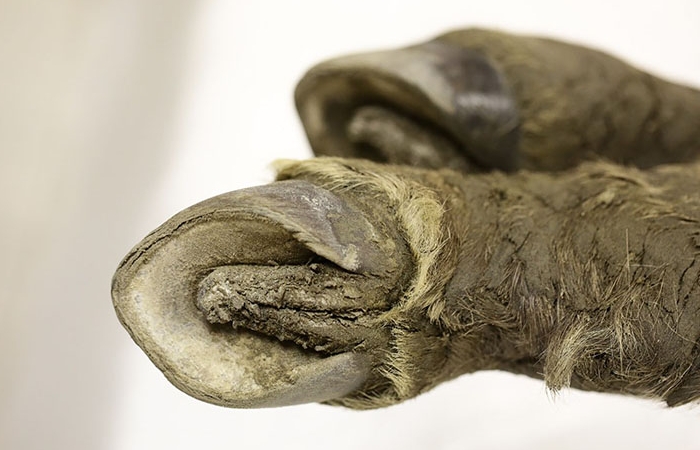 The permafrost is an incredible resource for learning more about life in the Ice Age, like a deep freezer that stores a snapshot of the past. Earlier this year, scientists in Siberia uncovered a prehistoric lion cub in incredible condition, so young that it didn’t even have teeth yet.

In addition to the foal, the research expedition recovered the rare skeleton of a mammoth, complete with soft tissues, in good condition.

So far, there has been no talk of cloning either the horse or the mammoth, as there was with the cave lion cub. Both animals, however, will be the subject of scientific research, with papers to come in the future.

Mysterious White Clouds Keep Popping Up Near The Bahamas, And No One Knows Why
Scans of Mummified ‘Golden Boy’ Reveal He Was Covered in Magical Protections
Scientists Create Shapeshifting Humanoid Robot That Can Liquefy And Reform
Dozens in 7,000 Year Old Mass Grave Were Carefully Decapitated After Death
Archaeologists Find Hidden Ruins of ‘Complete’ Roman-Era City in Egypt