Google Street View is a technological wonder that makes visiting almost anywhere on the planet (and off the planet) a virtual cinch. But it’s got some issues.

But, hang on a second. Just how Unidentified is this Flying Object anyway?

I mean, after all, from time to time, humans really do witness truly strange things in the skies above our heads that are difficult to fathom or reconcile.

Other times, people just get carried away with glitches in Google’s data, conjuring up UFO conspiracies for things that already have perfectly plausible explanations.

Which brings us back to that mysterious UFO floating above the swampy turf of Ochopee, Florida. 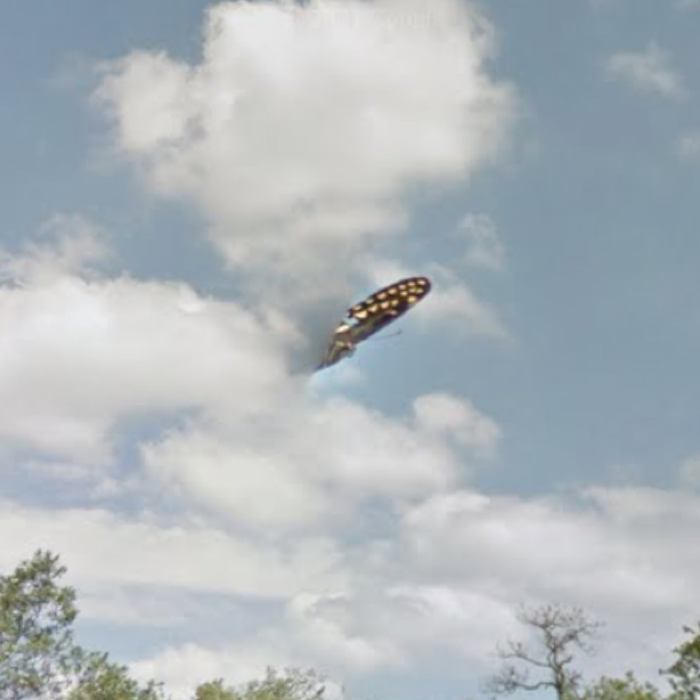 “An eagle-eyed Google Maps user has reported a mysterious ‘UFO sighting’ in the skies above a Florida swamp,” The Sun informs us.

“Even when zoomed in, it’s hard to define exactly what the object is.”

But is it? While the strange shape can at first be difficult to recognise, as The Sun later points out towards the end of their article, there’s also the distinct possibility that Google’s cameras have simply picked up a “fast-moving butterfly caught in a single shot”.

Part of the evidence for this is that the UFO is only visible in one frozen moment in time – if you move your virtual location to where the cameras captured the next image, it’s no longer visible (which is what you’d expect from a butterfly’s erratic flight).

“Of course,” The Sun acknowledges, “a UFO might also avoid sticking around for too long, so we may never know.”

Oh, I think we know.

I think we know that this image – which was captured all the way back in 2011, so is hardly even a topical example of suspected UFO spotting – is indeed a butterfly.

I’m no lepidopterist (that’s a fancy word for moth and butterfly scientist), but given the appearance and habitat, this mysterious UFO could be a swallowtail, maybe one like this – the Palamedes Swallowtail (Papilio palamedes), which is found in swampy areas, including those of Florida!

For what it’s worth, here’s what they look like up close:

Pretty amazing to look at really, but decidedly terrestrial in origin; and while they are unequivocally flying objects, they’re almost definitely not aliens.

Scientist Accidentally Discovers The Oldest Brain of Any Vertebrate
Mysterious Medieval City in Africa Had a Genius System to Survive Drought
Could ‘The Last of Us’ Ever Happen? The Real Risks of a Fungus Pandemic
Black Swans Could Be Entirely Wiped Out by a Single Virus, Scientists Warn
Incredible Footage Shows Planets Circling a Star Light-Years Away