The question of how life on Earth got started has long intrigued us, and new research suggests that primordial lightning strikes – perhaps over the course of a billion years – could have played a crucial role in sparking life on this planet.

Central to the idea is the way that lightning bolts create special glasses called fulgurites when they hit the ground. Fulgurites contain phosphorus, one of the key basic ingredients for the formation of life; this ingredient is often locked away inside insoluble rocks.

The early Earth may well have experienced enough lightning strikes over a long-enough period to release the necessary amount of reactive phosphorus for life to begin, researchers now think. In fact, the same process could be happening on other planets too.

“This work helps us understand how life may have formed on Earth and how it could still be forming on other, Earth-like planets,” says earth and planetary scientist Benjamin Hess from Yale University.

“It makes lightning strikes a significant pathway toward the origin of life.”

Since reactive phosphorus can be found in the soluble mineral schreibersite, it’s thought that meteorites – rich in schreibersite – may have been responsible for delivering phosphorus to our planet in a usable state. However, the era when life first started sprouting is not thought to have been a busy one in terms of meteorite hits on Earth.

Using a variety of spectroscopic imaging techniques, the researchers revealed that schreibersite could also be found inside fulgurite glasses when lightning hits particular types of clay-rich soil.

Through a computer model, the researchers then estimated that around 1 to 5 billion lightning flashes would have occurred every year on the early Earth (we get just 560 million or so annual flashes today), with up to 1 billion hitting the ground each year. 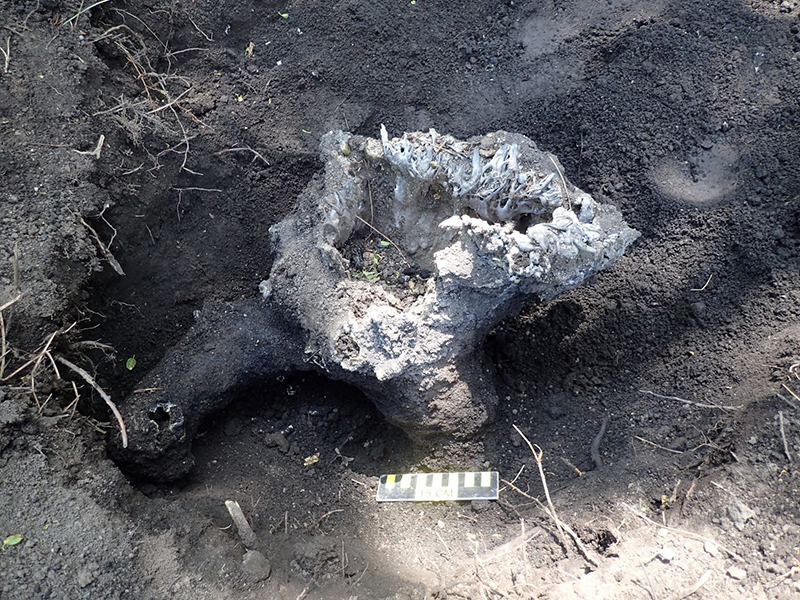 Excavating a fulgurite in Glen Ellyn in the US. (Stephen Moshier/Wheaton College)

Expand that across a billion years or so, and we’re talking in the region of 1 quintillion strikes – and a substantial amount of usable phosphorus that could then help the formation of DNA, RNA, and the other biomolecules that life as we know it relies on.

In fact, the phosphorus provided from lightning strikes may have started to exceed the phosphorus from meteorite strikes around 3.5 billion years ago, the team says – which is about the time when the first basic lifeforms are thought to have started emerging.

Phosphorus is just one part of a very precise cocktail of chemicals that scientists think must have been mixed on the early Earth, so that the building blocks of life could be created through the subsequent reactions.

What’s more, unlike meteorites, the lightning strikes would have been concentrated on land in tropical regions. This would have created areas of more abundant phosphorus precisely where the other ingredients for life’s cocktail were more likely to be concentrated together – in water sources on land, such as ponds.

It’s also a chemical signal that we can look for on alien worlds too – because if phosphorus triggered a chain reaction that led to life here on Earth, then the same sequence of events could also be happening elsewhere.

“This presents a mechanism independent of meteorite flux for continually generating prebiotic reactive phosphorus on Earth-like planets, potentially facilitating the emergence of terrestrial life indefinitely,” write the researchers in their paper.

Ancient Goo Spills The Secrets of How The Egyptians Mummified Their Dead
AI Predicts We’ll Breach Our Climate Goal in Just 10 Years
Astronomers Studied More Than 5,000 Black Holes to Figure Out Why They Twinkle
Incredible ‘Fairy’ Robot Sails on The Breeze Like a Floating Dandelion
Bar Graphs Induce a Hidden Bias in Interpretation, Experiment Shows