Many expecting fathers claim they’d love to take on the aching back, cramped organs, and painful contractions of their partner’s pregnancy. But so far, the male seahorse is the only vertebrate to make good on such a swap.

These remarkable fish can hold more than 1,000 embryos in a ‘brood pouch’ for up to a month before delivering them in a series of spasms. Sounds like pregnancy, right? You don’t know the half of it. We now have hints that the seahorse pouch might be even more womb-like than we thought.

Researchers from the University of Sydney and La Trobe University in Australia recently focussed on the question of how embryos in the fish genus Hippocampus receive nutrients while in their father’s care.

Seahorses belong to a rather unique club of sea creatures dubbed Syngnathidae, which also includes sea dragons and pipefishes.

For them, pregnancy is solely the work of the father, with the mother delivering fertilised eggs into his specialised incubation structure after a lengthy courtship dance.

But it’s never been entirely clear how far we should take the pregnancy analogy. Is the male seahorse just a glorified flesh nest for his yolk-sucking young, or is there something more complicated going inside his brood pouch?

It’s more than just a curious question – knowing how the males in a group of vertebrates facilitate embryonic development could shine a light on its evolution in other corners of the animal kingdom, including our own.

“My team is using a range of techniques to investigate the biology of seahorse pregnancy,” says University of Sydney geneticist and research team leader, Camilla Whittington.

“We want to understand more about the seahorse pouch and the ways it protects and supports the baby seahorses.”

One of those techniques involved comparing the dry weight of newly fertilised eggs from the pot-bellied seahorse (H. abdominalis) with the weight of newborns to determine what’s known as a Matrotrophy Index (MI).

Generally speaking, there are two ways animals can beef up as an embryo. In what’s known as lecithrophy, a store of pre-packaged nutrients we refer to as yolk provides building blocks and fuel.

Matrotrophy, on the other hand, describes the delivery of nutrients from the parent, such as through a placenta.

Many animals rely on a combination of these two feeding processes throughout the course of their early development, absorbing yolk for a time before absorbing materials from the mother.

The MI for this species of seahorse – or, to be more precise, its patrotophy index, or PI – revealed the total dry mass of the offspring hadn’t changed a great deal while they were in the pouch.

Given they clearly started with a supply of yolk, as seen below, their dry mass should have decreased as the yolk was used for energy and construction. All signs pointed to dad giving them a top-up while they grew, most likely in the form of lipids. 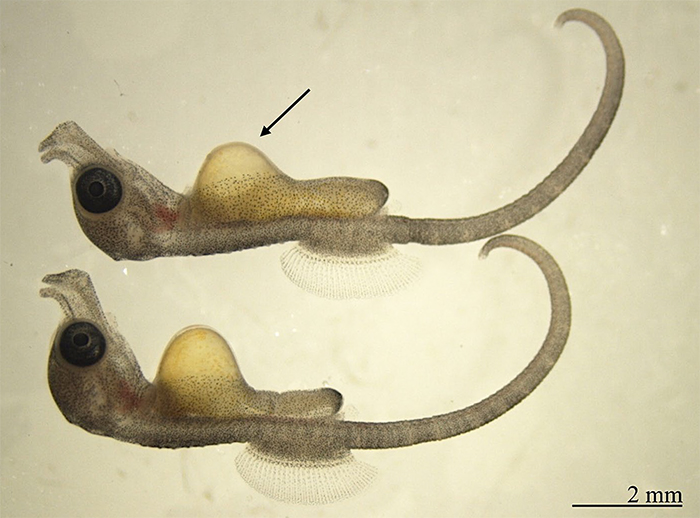 “It’s really exciting because it’s a big step in understanding the relationship between dad and baby in male pregnancy,” says Zoe Skalkos, the University of Sydney bioscientist who led the study.

It’s also just the first step. Knowing the seahorses are being nourished by dad is a significant discovery, but it doesn’t fully explain the mechanisms at work.

The team suspects they uncovered some clues as they collected their samples.

Sadly, the seahorse specimens had to be euthanised for analysis. It gave the researchers an opportunity to look closely at the way the eggs were embedded firmly in the brood pouch wall, much like an egg in a womb. A previous study has even hinted there may be some form of placenta-like connection involved, including enlarged blood vessels where the eggs are embedded.

“It’s not exactly like a human placenta though – they don’t have an umbilical cord, for example. We need to do further histological work to confirm this,” says Whittington.

Still, it seems the tissue inside the seahorse’s brood pouch has at least some capability of delivering nutrients, as well as oxygen and possibly immunity to protect the growing young from infection.

Finding the overlaps between examples of matrotrophy that evolved independently is a good way to gain an understanding of pregnancy in general.

It might even help human dads make good on their promise to take the load for a while. Are we ready?

This research was published in the Journal of Comparative Physiology B.

NASA is on a mission to reclaim lost moondust. And some cockroaches
Eerie figures with giant heads found painted in a rock shelter in Tanzania
Alien Worlds Very Different to Earth Might Be Habitable For Billions of Years
These toadlets are so tiny they can’t balance anymore, and the footage is ridiculous
Voids made by dying stars have been detected in our galaxy’s interstellar gas