You never know what you’re going to get when you crack open a geode-like rock called an agate, but a new specimen is even more surprising than usual: It looks just like Cookie Monster.

The agate, found in Soledade, a precious stone hotspot in southern Brazil, is a dead ringer for the blue, googly-eyed Sesame Street Muppet.

After its owner, California mineral collector Mike Bowers, posted about the agate on Facebook, it went viral, with write-ups in newspapers from Australia to Israel to the United States.

“I didn’t realize that Cookie Monster was so well known and part of the world cultural heritage!” Bowers told Live Science.

The agate came to Bowers in November via Brazilian gemologist Lucas Fassari, who had acquired it in a batch of many agates from Soledade.

Bowers immediately purchased the Cookie Monster agate, but didn’t post it online until Jan. 16, as he was ill with COVID-19.

Agates are a form of quartz, the crystalline form of silicon dioxide, that develop within cavities in volcanic rocks. The cavities are formed by gas bubbles in hot lava. 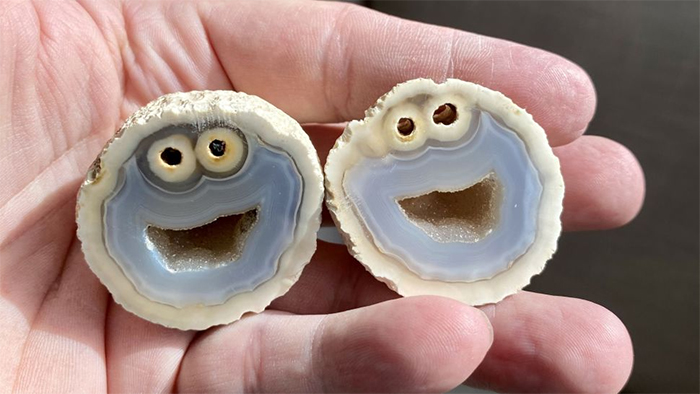 Some agates completely fill their volcanic voids, but many leave small spaces inside, lined with sparkly, inward-facing quartz crystals. In the case of the Cookie Monster agate, these voids just happen to look like a pair of Muppet eyes and an enthusiastically grinning mouth.

“It is somewhat uncommon to find a face shape in agates, but in many instances it’s like looking at the clouds. You kind of see a face,” Bowers said.

Another unique feature of the Cookie Monster agate is that the face appears on both sides of the cut stone, Bowers added. Usually the voids are not lined up so neatly as to create a mirror image.

For now, Bowers said, he plans to keep the stone. It may eventually end up in a museum or in the hands of a high-end collector, he said.

“It is totally unique and awesome to see everyone loving this stone as much as we do,” he said.

Photos of dazzling minerals and gems

Black Swans Could Be Entirely Wiped Out by a Single Virus, Scientists Warn
Are Your Cats Playing or Fighting? Researchers Think They Can Tell The Difference
Incredible Footage Shows Planets Circling a Star Light-Years Away
This Small Australian Marsupial Is Quite Literally Dying For Sex
Bar Graphs Induce a Hidden Bias in Interpretation, Experiment Shows