A volcano that spewed glowing red lava near Iceland’s capital Reykjavik after awakening for the first time in 900 years appeared to be subsiding on Saturday, posing no danger to people, experts said.

Streams of red lava bubbled and flowed out of a fissure in a valley in Geldingadalur, close to Mount Fagradalsfjall on the Reykjanes peninsula in southwestern Iceland.

As the lava flow slowed under rain showers on Saturday, a blue gas plume and a vapor cloud rose from the site, just 40 kilometers (25 miles) from the capital and near a popular tourist destination, the Blue Lagoon geothermal spa. 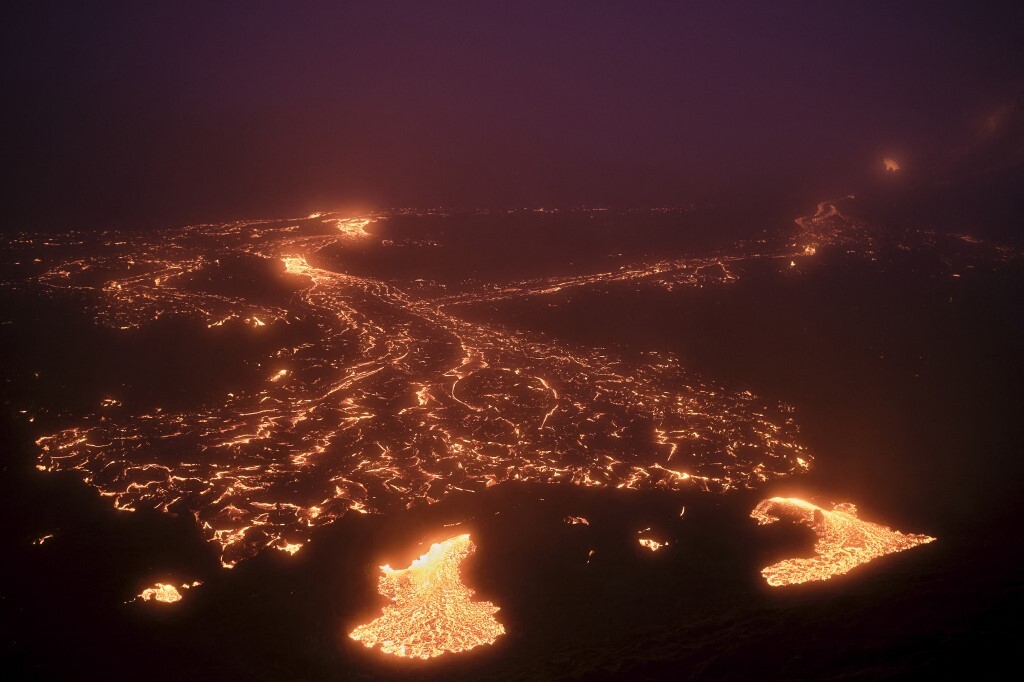 The eruption occurred on Friday around 20:45 GMT, lighting up the night sky with a crimson glow as hundreds of small earthquakes shook the area.

While Iceland’s Keflavik International Airport and the small fishing port of Grindavik are just a few kilometers away, the zone is uninhabited and the eruption did not present any danger to the public.

“The eruption is considered small at this stage and the volcanic activity has somewhat decreased since yesterday evening,” the Icelandic Meteorological Office (IMO), which monitors seismic activity, said in a statement on Saturday. 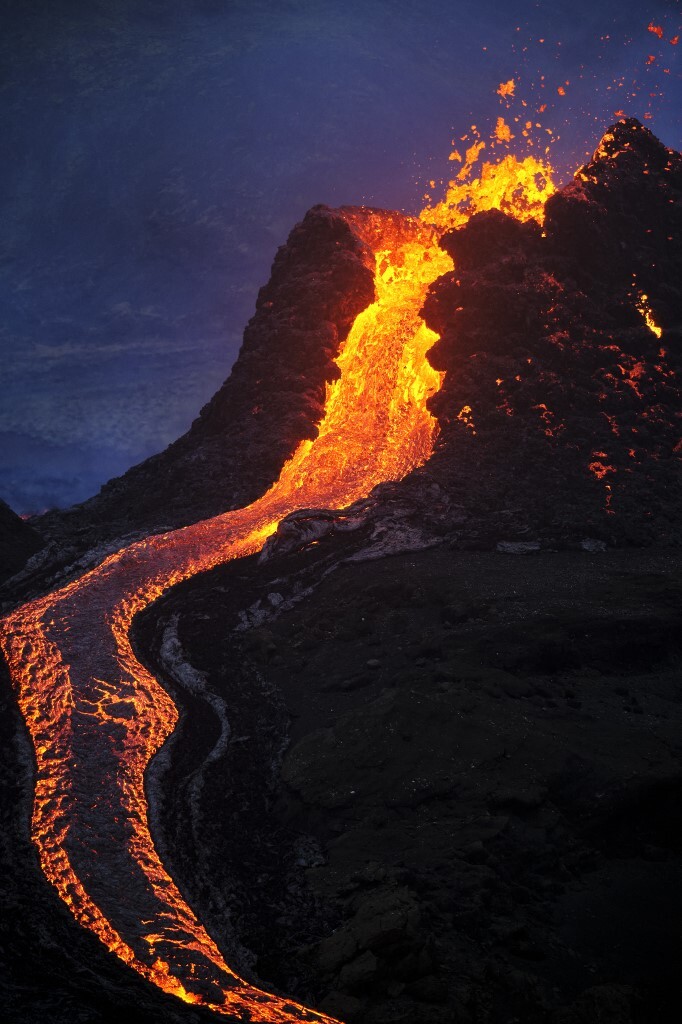 The lava area, it added, was less than one square kilometer (0.4 square mile), with small lava fountains.

Speaking to reporters, University of Iceland geophysicist Magnus Tumi Gudmundsson described the valley as an “ideal” spot for the eruption, likening it to “a bathtub the lava can slowly leak into.”

IMO earthquake hazards coordinator Kristin Jonsdottir meanwhile said it was “very likely the eruption will last for the next few days”.

Friday’s eruption took place in the Krysuvik volcanic system, which does not have a central volcano, about five kilometers inland from the southern coast.

Sigurdur Kristmundsson, a 54-year-old Grindavik port official, told AFP that locals were exhilarated by the eruption.

“Nobody is in danger or anything like that. So I think people are excited and not afraid of it.” 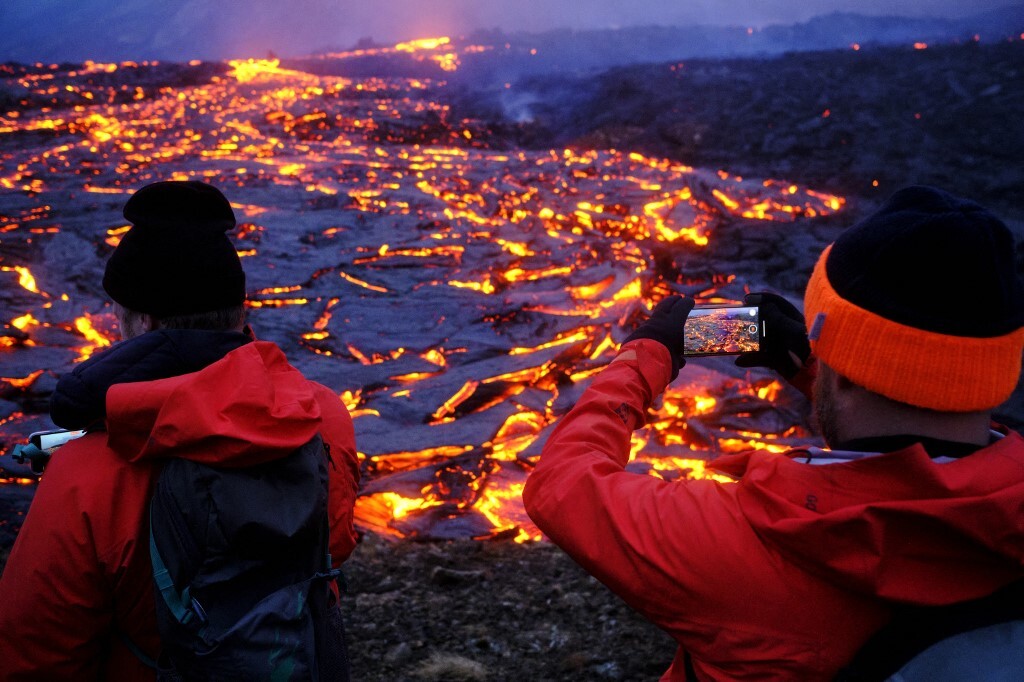 Access to the area was initially blocked off but later opened to the public, though Iceland’s Department of Civil Protection and Emergency Management stressed the several-hour hike from the nearest road was only recommended for those “used to being outdoors in difficult conditions.”

Gases from a volcanic eruption – especially sulfur dioxide – can be elevated in the immediate vicinity, and may pose a danger to health and even be fatal.

Gas pollution can also be carried by the wind.

“Currently gas pollution is not expected to cause much discomfort for people except close up to the source of the eruption. The gas emissions will be monitored closely,” the IMO said.

The Krysuvik system has been inactive for the past 900 years, according to the IMO, while the last eruption on the Reykjanes peninsula dates back almost 800 years and lasted about 30 years, from 1210 to 1240.

But the region had been under increased surveillance for several weeks after a 5.7-magnitude earthquake was registered on February 24 near Mount Keilir on the outskirts of Reykjavik.

Since then more than 50,000 smaller tremors had been registered, and magma was detected just one kilometer under the Earth’s surface in recent days near Fagradalsfjall.

Geophysicist Gudmundsson said the eruption signaled a new period “which may last centuries with eruptions, possibly 10 years to 100 years apart.” 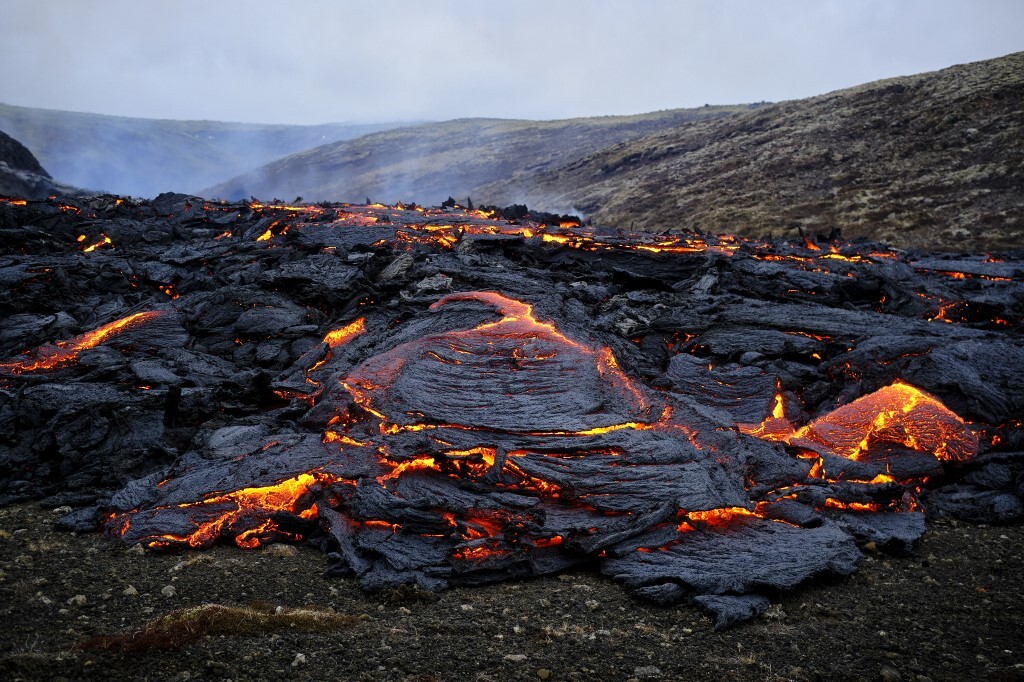 Land of fire and ice

Iceland has 32 volcanic systems currently considered active, the highest number in Europe. The country has had an eruption every five years on average.

The vast island near the Arctic Circle straddles the Mid-Atlantic Ridge, a crack on the ocean floor separating the Eurasian and North American tectonic plates.

The shifting of these plates is in part responsible for Iceland’s intense volcanic activity.

The most recent eruption was at Holuhraun, beginning in August 2014 and ending in February 2015, in the Bardarbunga volcanic system in an uninhabited area in the center of the island.

That eruption did not cause any major disruptions outside the immediate vicinity.

But in 2010, an eruption at the Eyjafjallajokull volcano sent huge clouds of smoke and ash into the atmosphere, disrupting air traffic for more than a week and cancelling more than 100,000 flights worldwide, which left some 10 million passengers stranded.

Archaeologists Find Hidden Ruins of ‘Complete’ Roman-Era City in Egypt
Dogs Can Be Aggressive For Lots of Reasons, And One of Them Is You
‘Extraordinarily Close’ Asteroid About to Zoom Past Earth, NASA Says
Shooting Tiny, High Speed Bullets at a Spacecraft Could Speed Up Travel to The Stars
Are Your Cats Playing or Fighting? Researchers Think They Can Tell The Difference