We all know that corvids (ravens and crows) are no bird brains. Earlier this year, they stunned scientists with their ability to tear paper into a tool to obtain food.

Now another bird has followed suit: Goffin’s cockatoos (Cacatua goffiniana) have shown that they can tear cardboard into the shape of a tool to get a snack.

“If one bird can do it,” you may be thinking, “what’s so great about another?”

Well, dear readers: corvids are renowned for their smarts. They’re also habitual tool-users in the wild, making their own tools to get food if they can’t find one (and some of the ones they find are pretty wild!).

But while other species of cockatoos have been observed using tools in the wild, Goffin’s cockatoos have not; and nor do they build nests or cache food, both behaviours that are considered an important step in birds to develop tool use.

Nevertheless, in the past, these small parrots have shown some remarkably corvid-like abilities.

Like corvids, they have been seen using tools; like crows; they can exercise self control; also like crows, they can solve complex, multi-step puzzles; and like wild crows, they can bend sticks and wires into shapes needed to get access to difficult-to-reach food.

But the new trick is different. It means the cockies can look at a piece of cardboard and figure out how to make the shape they need to reach a piece of food only accessible through a small hole – although not always successfully.

The researchers, from the University of Veterinary Medicine Vienna’s Goffin Lab, approached the research with two questions: “Can Goffins adjust the properties of their tools to save effort?” they wrote in their paper.

“If so, how accurately do they attend to the properties of their tools relative to their respective function during tool manufacture?” 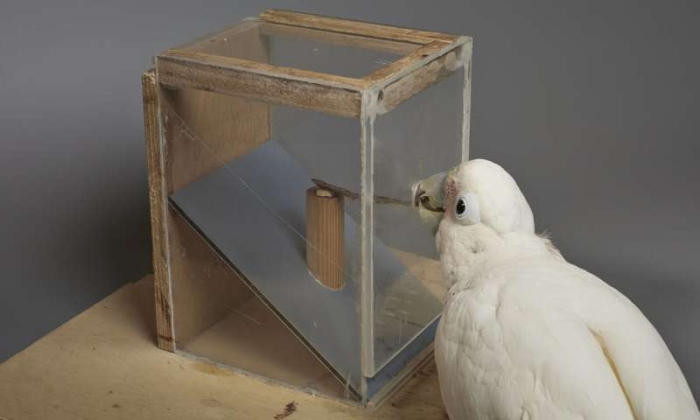 The test was conducted on six Goffin’s cockatoos, birds that are endemic to Indonesia. The experiment involved a simple basic set-up. A food treat was placed in a long, clear box, with just a small hole for access, and a ramp so the food, when knocked off its perch, would roll towards an opening at the front of the box.

The cockatoo could see the treat, but not reach it without aid. A piece of cardboard was placed in front of the box.

The researchers found that the cockatoos could fashion a long, thin piece of cardboard that they could fit through the hole to knock the food loose – and that, when the food was moved closer or farther away in the box, the birds would adjust the length of their cardboard stick accordingly.

As the test progressed, the birds started out making longer tools from the get-go perhaps, the researchers suggested, as a fail-safe should the food prove farther than they think.

However, they did seem to struggle with width. When the access hole was narrowed, only one of the birds was able to produce a tool thin enough to go through. It’s unclear whether this is a limitation of the cardboard – perhaps the technique the birds use to tear the cardboard into a strip limits the narrowness of the strip.

Or perhaps the birds just don’t understand that a narrower opening requires a narrower tool. More experiments, with a material that’s easier for the cockatoos to shape, could help figure this out. But the researchers think it’s a physical limitation, not a cognitive one.

“The way they inserted and discarded manufactured pieces of specific lengths differently depending on condition suggests that the cockatoos could indeed adjust their tool making behaviour in the predicted direction but with some limits in accuracy,” said zoologist Alice Auersperg of the Medical University of Vienna.

There is an important distinction between these birds and corvids. Most crows and ravens on which cognitive tests are conducted are caught in the wild, held for only a short time, and released when the experiment is over.

The six Goffin’s cockatoos in this experiment were all hand-raised, and all had had prior experience with tool construction.

Two of them had even had experience shaping cardboard tools. That doesn’t make them less clever, but it does suggest that they may have learnt cleverness in their environment, and through repeated experimentation.

Even if that is the case, though, the finding is an interesting once, since these birds don’t tend to seek out, make or use tools in the wild.

This indicates they’re perhaps as smart or even smarter than the birds considered the most intelligent on the planet.

And it certainly raises some interesting questions about the complexity of animal intelligence. If a smart cockatoo isn’t using its smarts, is it still smart?

The team’s research has been published in the journal PLoS One.

Scientists Reveal The Most Distant Galaxy We’ve Ever Found
An Expert Explains Why The Radioactive Water Stored at Fukushima Should Be Released
People Who Don’t Exist Look More Real Than Actual People, Study Finds
‘Funky Worm’ Fossil Helps Explain The Mysterious Origins of Amphibians
This Species of Carnivorous Plant Evolved Into a Toilet And Is Now Winning at Life