Their name means ‘monster’, and once upon a time, ancient sailors feared that’s exactly what these giant creatures of the deep were.

But while basking sharks (Cetorhinus maximus) might be the second-largest fish in the ocean, these gentle giants are not fearsome predators but vulnerable plankton-eaters – and despite their massive size, there’s still a huge amount we don’t know about them.

Rohr and fellow researchers are tracking these massive baskers – so called because of their tendency to sometimes linger in warmer surface waters – in an effort to find out more about their population, migratory patterns, and sexual behaviour.

When they’re not basking in the sunlight during summer months, these giant creatures (which can grow over 10 metres or 35 feet in length) can disappear into the depths for several months at a time before resurfacing, swimming as deep as 900 metres (around 3,000 feet).

During these epic dives, transmitters attached to the sharks record their underwater movements for months at a time, and then transmit data to satellites when the animals come up for some Sun and surface time.

“I just saw the tip of his fin,” fisherman Alain Quemere, who encountered a basking shark off the coast of Brittany in France’s northwest, told AFP.

“One moment it grazed the front of the boat, which made me laugh because my boat is barely five and a half metres and the shark was eight.”

Thanks to reported sightings like these from sailors, divers, and other people out on boats, the APECS researchers get a chance to tag the massive sharks with the transmitters, with every specimen giving valuable data on their activity in the ocean.

One insight from the project is just how migratory these sharks actually are. One female monitored in the study swam from Scotland to the Canary Islands, then to the Bay of Biscay, all in less than a year. 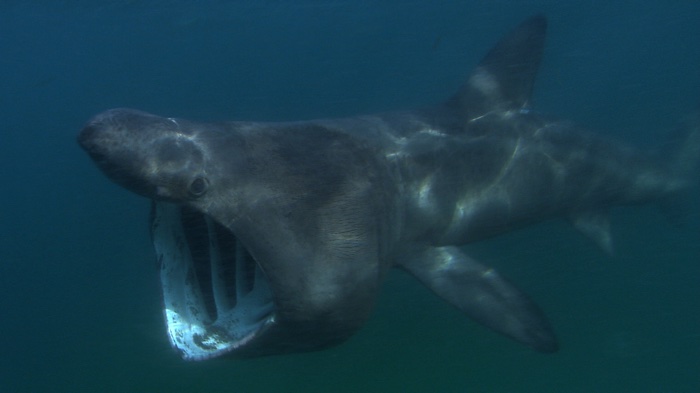 As AFP reports, seven basking sharks have been tagged with the transmitters since 2016, and while sightings in the region are generally rare – especially during winter – every time one of these giant sharks emerges is a chance for us to learn a little bit more about them.

Due to overfishing, these gentle giants are now listed as vulnerable on the IUCN Red List of Threatened Species, and if we can begin to piece together more about their mysterious behaviour, it will help us to protect and conserve the population that remains.

“You have the impression of seeing a wise, old grandfather,” diver Frederic Bassemayousse, who has spotted basking sharks three times, told AFP.

A giant sunspot doubled in size in 24 hours, and it’s pointing right at Earth
Astronomers discover a bizarre spiral object swirling around the Milky Way’s center
Skin mites that mate on our faces at night are slowly merging with humans
Meteorite discovery challenges our understanding of how Mars formed
The largest bacterium has been found. It’s eyelash-length and like nothing we’ve seen