A large, mysterious fish discovered only recently has been found on a beach in Santa Barbara, California. The find has weirded out biologists, because as far as we know, this huge sunfish is supposed to live in the Southern Hemisphere.

The discovery of the hoodwinker sunfish (Mola tecta) was announced in 2017 to much fanfare. It was the first new sunfish to be discovered in 130 years – quite a feat considering how large they are. They can grow up to 3 metres (9.8 feet) in length.

It was named for this impressive stealth – tectus being the Latin word for ‘hidden’.

Most known specimens have turned up in the Southern Hemisphere, including the one from New Zealand which scientists used for the scientific description published in 2017. So naturally it was thought this enigmatic animal lives on the southern half of our globe.

But the 2.1-metre (7-foot) Santa Barbara sunfish, which washed ashore at the Coal Oil Point Reserve, throws an interesting curveball into our understanding of these creatures. 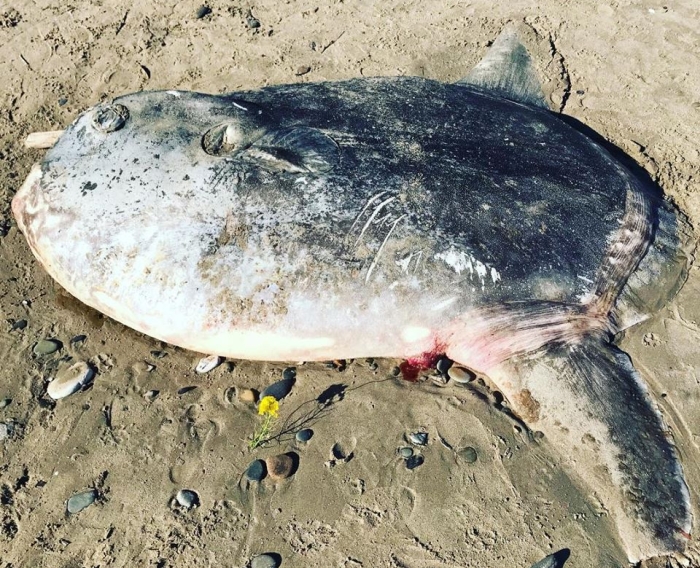 It was first spotted by a Coal Oil Point Reserve intern, who thought it might be an ocean sunfish (Mola mola), which is closely related to the hoodwinker. She alerted reserve conservation specialist Jessica Nielsen, who took some photos and posted them to Facebook.

The post was noticed by UC Santa Barbara marine biologist Thomas Turner, who went down to the beach to see for himself, and take his own photos. He posted the find to community nature observation website iNaturalist, where it got the attention of Australian sunfish experts Marianne Nyegaard from Murdoch University (who led the discovery of M. tecta) and ichthyologist Ralph Foster of the South Australian Museum.

But the photographs did not clearly show the features needed for a positive identification, so they asked Nielsen and Turner to go back and take more photos and a sample. “I literally, nearly fell off my chair (which I was already sitting on the edge of!),” Nyegaard said.

“Tom Turner and Jessica Nielsen had indeed found the fish and had photographed and examined it, and taken a tissue sample. A huge amount of extremely clear photos was in my inbox and there was just no doubt of the ID.”

As it turns out, its presence in Northern Hemisphere waters is not unprecedented. A sunfish collected in 1889 in the Dutch islands and preserved at the Naturalis Biodiversity Centre was determined in 2017 not to be an example of M. mola as originally thought.

It’s still unclear what they were doing there, though. Researchers at the Naturalis Biodiversity Centre just figured their sunfish had gotten herself lost. Since the two finds are separated by 130 years, it’s not outside the realm of possibility that a hoodwinker sunfish just goes astray from time to time.

But it’s also possible there’s another reason for the fish’s mysterious appearance. For instance, climate change can see animals deviating from their previous territory – although that doesn’t explain the 1889 hoodwinker.

But this new discovery certainly opens up a fascinating line of enquiry about where this large fish tends to travel and why.

And it highlights the value of resources that allow scientists and the broader community to communicate and collaborate around the world.

“It was iNaturalist at its best: experienced novice loops in expert, who loops in the expert, who then helps us learn about our find and gets information she will use in her research,” Turner said.

“And it was fun and exciting for all.” (Except maybe the dead sunfish.)

Archaeologists Find Hidden Ruins of ‘Complete’ Roman-Era City in Egypt
There’s a ‘Lost City’ Deep in The Ocean, And It’s Unlike Anything We’ve Ever Seen
Scientists Create Shapeshifting Humanoid Robot That Can Liquefy And Reform
This Rembrandt Has Been Hiding a Surprising Secret For Centuries
Sword Mistaken For Replica Is Actually An Ancient 3,000-Year-Old Weapon