Scientists confirmed that the submerged land mass, named Zealandia, was its own continent in 2017. But they hadn’t been able to map its full breadth until now.

On Monday, researchers from GNS Science in New Zealand announced that they’d mapped the shape and size of the continent in unprecedented detail. They put their maps on an interactive website so that users could virtually explore the continent.

“We’ve made these maps to provide an accurate, complete, and up-to-date picture of the geology of the New Zealand and southwest Pacific area – better than we have had before,” Nick Mortimer, who led the work, said in a statement.

Mortimer and his colleagues mapped the bathymetry surrounding Zealandia – the shape and depth of the ocean floor – as well as its tectonic profile, showing where Zealandia falls across tectonic-plate boundaries.

The maps reveal new information about how Zealandia formed before it became submerged underwater millions of years ago.

But only 6 percent of the continent is above sea level. That part underpins New Zealand’s north and south islands and the island of New Caledonia. The rest is underwater, which makes Zealandia challenging to survey.

To better understand the submerged continent, Mortimer and his team mapped both Zealandia and the ocean floor around it. The bathymetric map they created (below) shows how high the continent’s mountains and ridge rise toward the water’s surface. 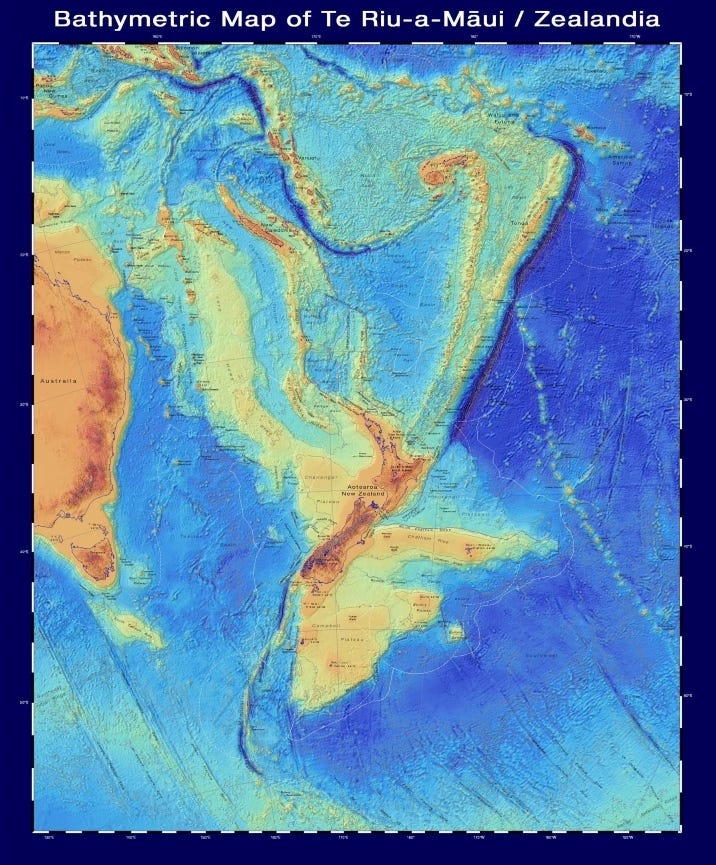 A bathymetric map showing the details of Zealandia. (GNS Science)

It also depicts coastlines, territorial limits, and the names of major undersea features. The map is part of a global initiative to map the planet’s entire ocean floor by 2030.

The second map the GNS scientists made (below) reveals the types of crust that make up the underwater continent, how old that crust is, and major faults. The continental crust – the older, thicker kind of Earth’s crust that forms landmasses – is shown in red, orange, yellow, and brown. The oceanic crust, which is generally younger, is in blue. Red triangles show where volcanoes are.

This map also reveals where Zealandia sits across various tectonic plates, which of those plates are being pushed under the other in a process known as subduction, and how quickly that movement is happening.

Studying the tectonic machinations that underpin Zealandia today can reveal clues about how the continent formed in the first place.

The concept of Zealandia is 25 years old. Geophysicist Bruce Luyendyk coined the term in 1995.

Luyendyk previously told Business Insider that he never intended for the term to describe a new continent. Rather, the name originally referred to New Zealand and a collection of submerged chunks of crust that broke off the ancient supercontinent Gondwana about 85 million years ago.

“The reason I came up with this term is out of convenience,” Luyendyk said. “They’re pieces of the same thing when you look at Gondwana. So I thought, ‘Why do you keep naming this collection of pieces as different things?'”

Geologic forces continued to rearrange these land masses, and Zealandia was forced under the waves about 30 million to 50 million years after it broke off Gondwana as the largest tectonic plate – the Pacific Plate – slowly subducted beneath it.

These maps show Zealandia is a continent like the other 7

Until 2017, Zealandia was classified as a “microcontinent,” like the island of Madagascar. But according to Mortimer, Zealandia ticks all the boxes for continent status: It has clearly defined boundaries, occupies an area greater than 386,000 square miles (1 million square kilometers), is elevated above the surrounding ocean crust, and has a continental crust thicker than that oceanic crust.

These new maps therefore offer further evidence that the underwater land mass should be considered the eighth continent, Mortimer added.

“If we could pull the plug on the world’s oceans, it would be quite clear that Zealandia stands out,” he told Science News in 2017, adding, “If it wasn’t for the ocean level, long ago we’d have recognised Zealandia for what it was – a continent.”

Termites Love Global Warming So Much That They May Make It Worse, Says Study
Piles of Trash From Decades of Exploration Could Put Future Missions at Risk
It’s Not Just Men in Power Who Use Unwanted Sexual Behavior For Gain
Dinosaurs Were Already on Their Way Out Before Asteroid Hit, Another Study Finds
Why Do We Laugh? New Study Suggests It May Be a Survival Strategy