Say hello to a new theropod dinosaur species, Vectaerovenator inopinatus. Discovered after a series of serendipitous fossil finds on the Isle of Wight in the UK, it’s thought to date from around 115 million years ago, during the Cretaceous period.

The Latin name of the new dino roughly refers to ‘unexpected air-filled hunter from the Isle of Wight’, which gives you some idea of how and where it was found, the type of dinosaur that it is, and how palaeontologists were able to figure out what they were dealing with.

All four discovered fossils are hollow or “air-filled”, which points to the delicate structure of the animal and places it in the theropod group, alongside other dinosaurs such as the Tyrannosaurus rex and the ancestors of modern-day birds. 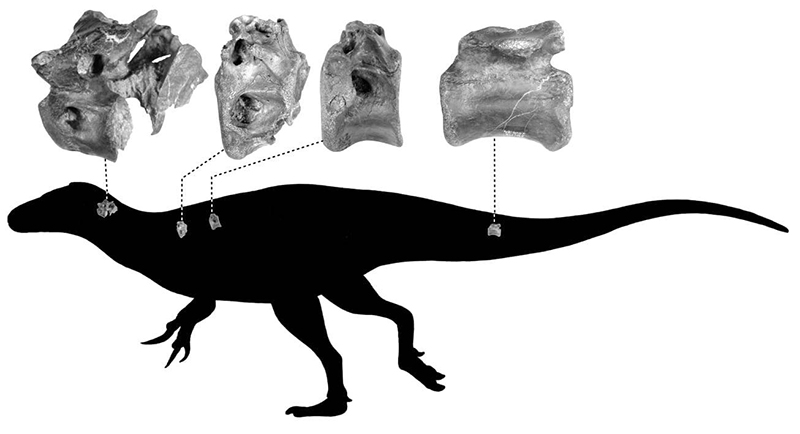 Silhouette of a theropod indicating where the uncovered bones are from. (Darren Naish)

“We were struck by just how hollow this animal was – it’s riddled with air spaces,” says palaeontologist Chris Barker, from the University of Southampton in the UK. “Parts of its skeleton must have been rather delicate.”

“The record of theropod dinosaurs from the mid-Cretaceous period in Europe isn’t that great, so it’s been really exciting to be able to increase our understanding of the diversity of dinosaur species from this time.”

The four key fossil pieces in the new research were found in three discoveries – two by individuals and one by a family group – on the shores of Shanklin in the Isle of Wight. The fossil finders are also named as co-authors on a new paper about the findings that is due to be published soon.

After the fossils were handed in to the Dinosaur Isle Museum at nearby Sandown, experts got to work on trying to identify them and piece them together – and that’s when they realised they were dealing with a new species and a new genus.

While the Isle of Wight is well known for its dinosaur remains, the ground that the fossils were found in was composed of marine deposits – somehow this particular terrestrial dinosaur found its way to a watery grave.

“You don’t usually find dinosaurs in the deposits at Shanklin as they were laid down in a marine habitat,” says Barker. “You’re much more likely to find fossil oysters or driftwood, so this is a rare find indeed.”

That rarity, together with the similarity of the bones, suggests they were all from a single animal. Using comparative anatomy techniques, Barker and his colleagues were able to identify the type of dinosaur they were dealing with, as well as what set it apart from other species.

However, with only four pieces to go off of, the researchers are looking for additional material to be more certain that Vectaerovenator inopinatus was once a living, breathing creature – thought to have been up to 4 metres or 13 feet in size.

If you find yourself walking on Shanklin beach, keep your eyes open: not only could you help shed light on a section of the European dinosaur record that we know very little about, you might discover something entirely new.

“It looked different from marine reptile vertebrae I have come across in the past,” says regular fossil hunter James Lockyer, from Lincolnshire in the UK, who found one of the fossils on a visit to the Isle of Wight.

“I was searching a spot at Shanklin and had been told and read that I wouldn’t find much there. However, I always make sure I search the areas others do not, and on this occasion it paid off.”

The research has been submitted for publication in Papers in Palaeontology.

Scientists Create Shapeshifting Humanoid Robot That Can Liquefy And Reform
Scientists Reveal The Most Distant Galaxy We’ve Ever Found
Mysterious ‘Zone of Uncertainty’ Inside The Brain Reveals a Surprise
Black Swans Could Be Entirely Wiped Out by a Single Virus, Scientists Warn
JWST Has Found Life’s Elemental Building Blocks in The Depths of Darkest Space