Peacock spiders are so adorable, they stand a chance to sway the feelings of the most seasoned spider hater. These creatures are tiny –  a mere 5 millimetres (0.2 inches). They’re also fluffy, the males have incredibly colourful butts, and they love to dance.

Now we’ve discovered these spiders also have an interesting superpower – the incredible colours of their hinds need something to stand out against, a pigment scientists are calling ‘super black’.

Peacock spiders (collectively known as the genus Maratus) are nearly all found in Australia, with over 80 species making up the beautiful dancing family.

The males woo the females by lifting their legs and their colourful abdomens, and even shaking them around to really get the female’s attention. As females are picky and usually only mate once, the pressure to impress is on.

“There is strong mate choice by female peacock spiders for strikingly bright and bold colour patterns; jumping spiders have acute colour vision and colourful male ornaments are the direct targets of female choice,” the international team of researchers explain in their paper.

But mixed in with the blues, golds, and other colours, there’s usually a little bit of black.  You can see this in the video of the peacock spider M. speciosus below.

Although the black patches might look normal, they actually absorb more light than what a regular black colour. According to the researchers, such extra-black patches in turn make the surrounding colours look impossibly bright.

“Super black is defined as structural or structurally assisted absorption with significantly reduced specular reflectance compared to that of a flat (unstructured) surface of the same material,” explains the team.

Put simply, super black is not a pigment, but what’s called a structural colour – it uses surface bumps and grooves (know as microstructures) that are small enough to distort visible light. In this case, it helps the black absorb more light, therefore making the other colours ‘pop’ beside it.

In fact, in the two spiders described in the study – M. speciusus and M. karrie - less than 0.5 percent of the light that struck the black patches was reflected. You can see what the microstructures look like in these electron microscopy pictures below: 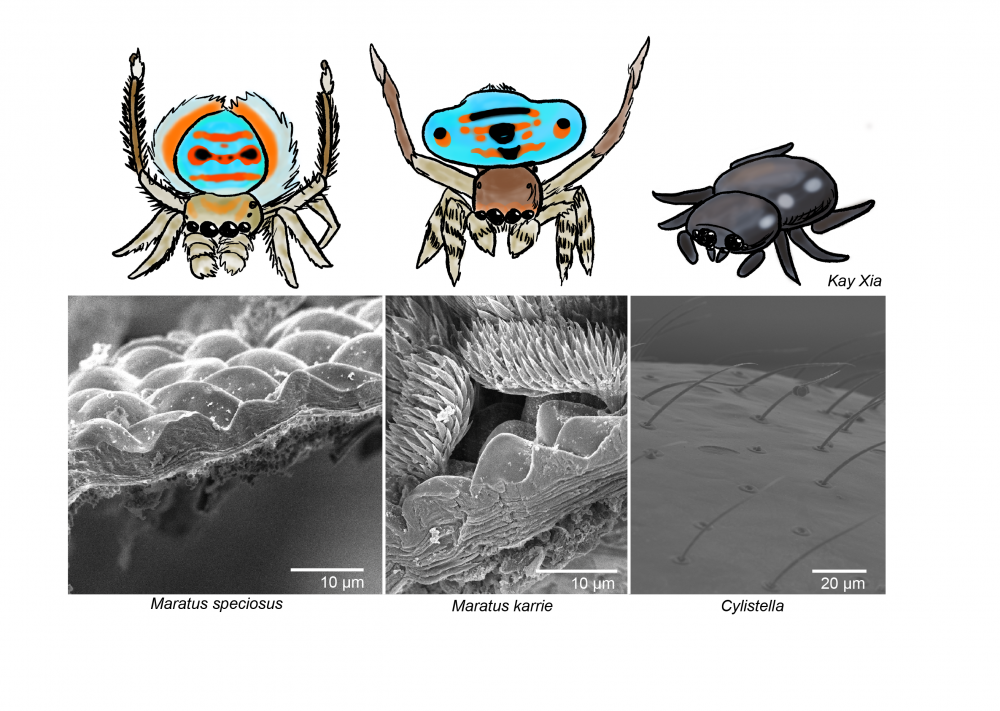 The third spider in the image serves as the ‘control’ – it’s a type of jumping spider called Cylistella which is just a normal, pigmented black. In that version there are no bumps, just a smooth surface.

But peacock spiders aren’t the first creatures we’ve found sporting super black. As the team discusses in their paper, another creature with this colouration is the male bird of paradisebird of paradise.

When you think about it, this is kind of amazing – that both these birds and spiders managed to evolve this feature. This phenomenon, when completely unrelated species evolve the same trait, is known as convergent evolution. It happens when the different species are met with similar evolutionary selection pressures; this time that pressure is all about wooing a mate.

“In both birds and spiders, sexual selection has apparently led to the evolution of a convergent optical, often angle-dependent, illusion,” the researchers concluded in the paper.

Who knew that bright colours and a cute little waggling dance wouldn’t be enough?

The research has been published by Proceedings of the Royal Society B – Biological Sciences.