After months of fruitless searching, one of the most endangered birds on the planet has finally been spotted once more.

It’s not particularly flashy, nor large. Stresemann’s Bristlefront is a medium-sized, long-tailed bird with distinctive bristles on its forehead – but scientists think there are only a handful of these creatures left in the world.

Two sightings of a female on December 12 and 14 have now given conservationists hope that it’s not too late to save the bird from total extinction, as its rapidly dwindling rainforest habitat is threatening to push the population right down to zero.

Found only in a small region of eastern Brazil, Stresemann’s Bristlefronts (Merulaxis stresemanni) were first noted in the 1830s. But it seems they were always an elusive sort. 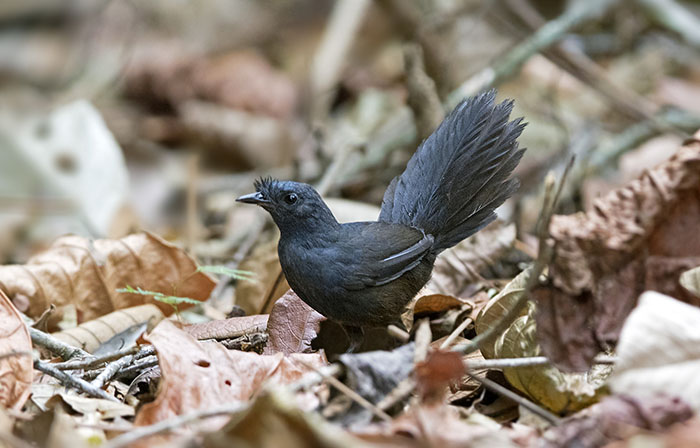 After that initial spotting, it wasn’t until the mid-20th century that another specimen was collected. The species got its name thanks to German-Brazilian ornithologist Helmut Sick, who noted both the bird’s distinctive bristles and the name of his tutor Erwin Stresemann.

A name wasn’t enough to keep the bird in our sights, though. It disappeared for another 50 years before another encounter in 1995 – which gives you some idea of just how rare it is to chance a look at this creature. 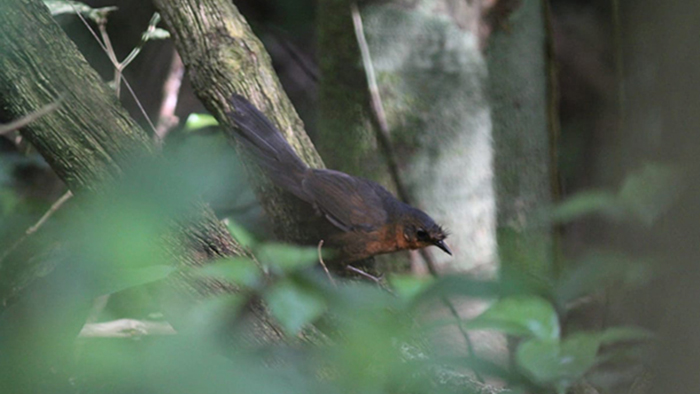 Now conservation efforts are focussing on the area of northeast Minas Gerais, where it’s hoped the small population can be kept alive and allowed to flourish.

“Although we are relieved that the Stresemann’s Bristlefront continues to survive, the species’ future remains precarious,” says one of the conservation team, Amy Upgren from the American Bird Conservancy (ABC).

“Much more work needs to be done to locate additional individuals and protect additional habitat.”

As well as the eye-catching look of the bird, it also has a rather special song – one that is noticeable different from that of its sister species, the Slaty Bristlefront (Merulaxis ater). You can hear it for yourself.

A little haunting, this is the sound of perhaps the world’s rarest bird, a female Stresemann’s Bristlefront spotted last week in Brazil. We won’t give up searching, but as of now, she is the last-known of her kind. (Recording by @biodiversitas) https://t.co/HLph5OVH2j pic.twitter.com/sgzUFDIP2H

It would be tragic for all trace of Stresemann’s Bristlefront to be lost forever, and the ABC is working with its partner organisation Fundação Biodiversitas in Brazil to find more of the birds in the wild.

These endeavours are concentrating on the Mata do Passarinho Reserve or Songbird Forest, an area of around 2,352 acres (952 hectares) set aside for species conservation.

The protected reserve was expanded in 2016 and has been used to supply extra food for M. stresemanni, as well as some artificial burrows for the birds’ ground nests.

With recent studies emphasising just how precarious is the state of South American rainforests, it’s essential that programs like the one hoping to save Stresemann’s Bristlefront are kept in place.

Fires and climate change have added to the effects of deforestation to make the bird’s situation so critical.

After no sightings at all in 2017 around the Songbird Forest, the reappearance of the Stresemann’s Bristlefront is the perfect Christmas present for conservationists – and it means there’s still hope.

“Conservationists have recovered a number of bird species from tiny populations, including the Seychelles Magpie-Robin, Whooping Crane, and Lear’s Macaw,” says one of the team, Gláucia Drummond from Fundação Biodiversitas.

“We are hopeful that if we can find more birds and take significant action quickly, this bristlefront population can also grow.”

Dozens in 7,000 Year Old Mass Grave Were Carefully Decapitated After Death
Earth’s Inner Core May Right Now Be in The Process of Changing Direction
Physicists Break Record Firing a Laser Down Their University Corridor
A Rare Green Comet Can Be Seen in The Sky, And It May Be Our Last Chance
Mysterious ‘Zone of Uncertainty’ Inside The Brain Reveals a Surprise