A deepwater robot, humming through the twilight zone of Monterey Bay, has managed to capture incredibly rare video footage of a giant phantom jelly.

In 34 years of conducting deep sea studies, the Monterey Bay Aquarium Research Institute (MBARI) has sent out remotely operated vehicles (ROVs) to the deep sea on thousands of occasions, and yet this is only the ninth time they’ve stumbled upon this cagey crimson creature.

Close up, the species’ 1-meter-wide bell (3.3 feet) can be seen pulsing, its translucent body a crimson-hued shadow with four long tentacles billowing eerily in the background.

At a depth of 990 meters (about 3,200 feet), sunlight has all but faded. Any light that does make it so far is unlikely to contain any warm hues, making the reddish flesh of the jellyfish look particularly black to any nearby eyes. 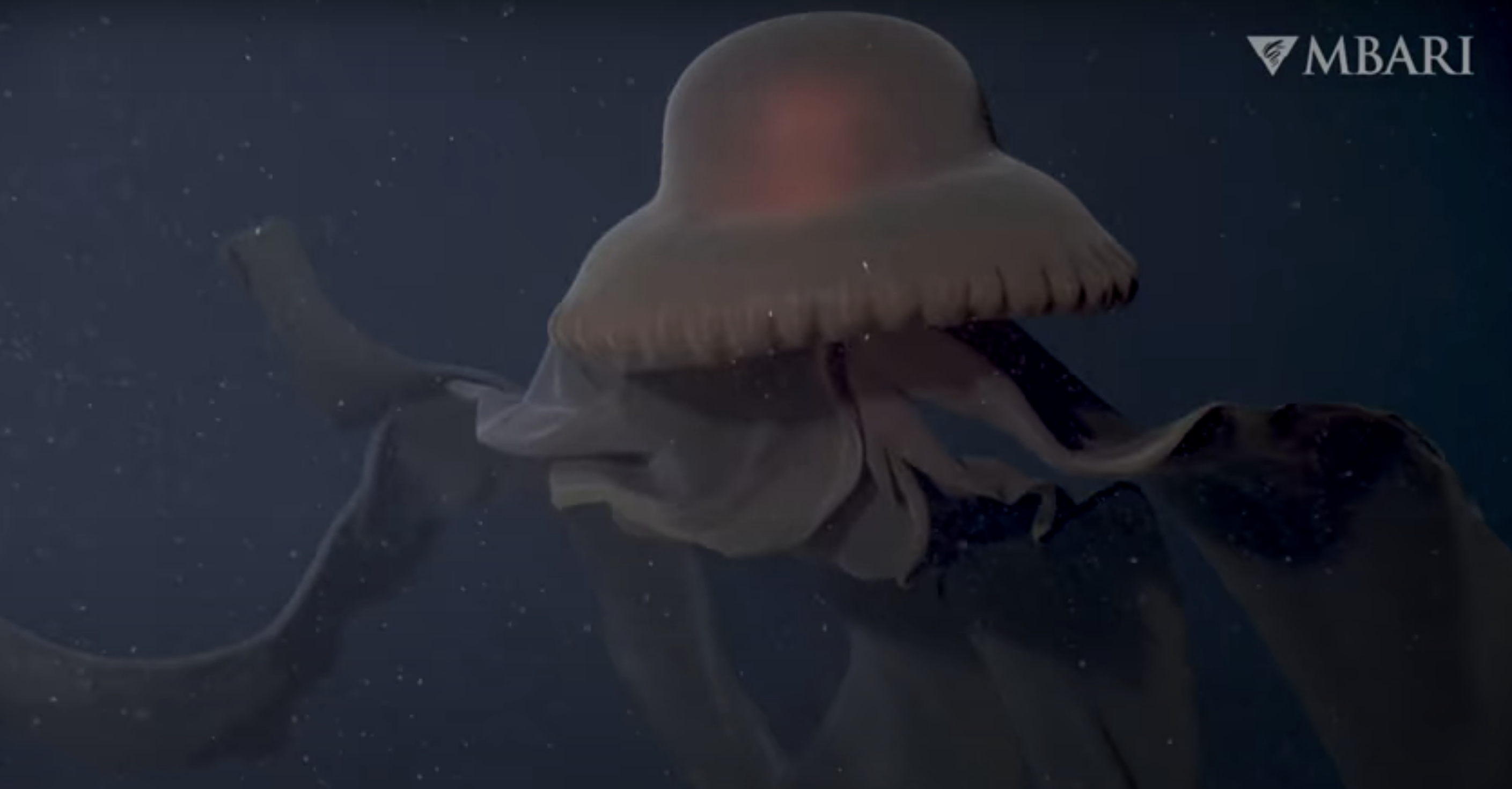 From above, the jelly looks almost like a hat, sitting on a ghost-like frame draped in dark robes. 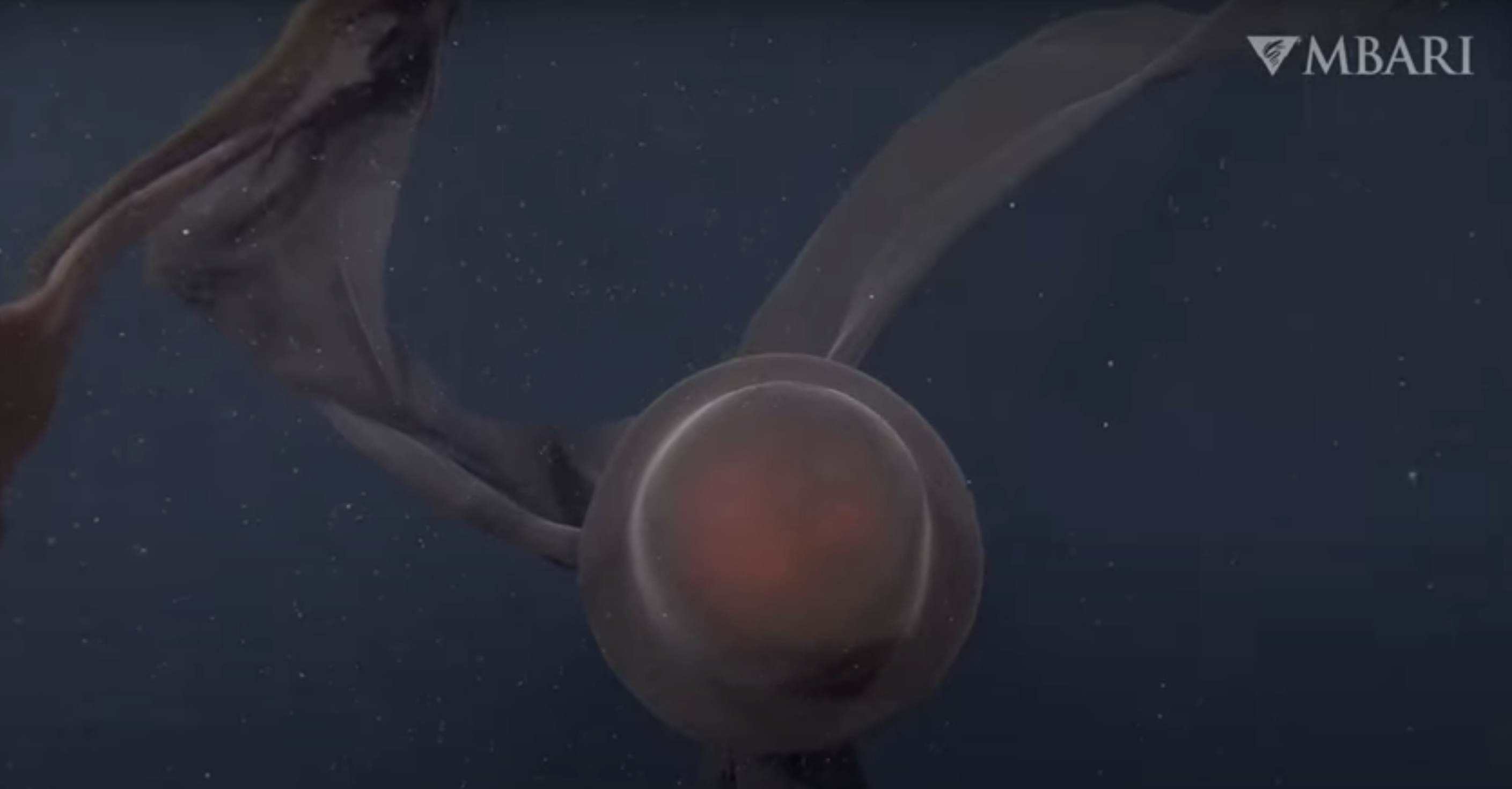 From further away, the sheer size of the giant becomes even more impressive. In this shot, the phantom jelly’s oral arms can be seen trailing some 10 meters (33 feet) behind its bell. 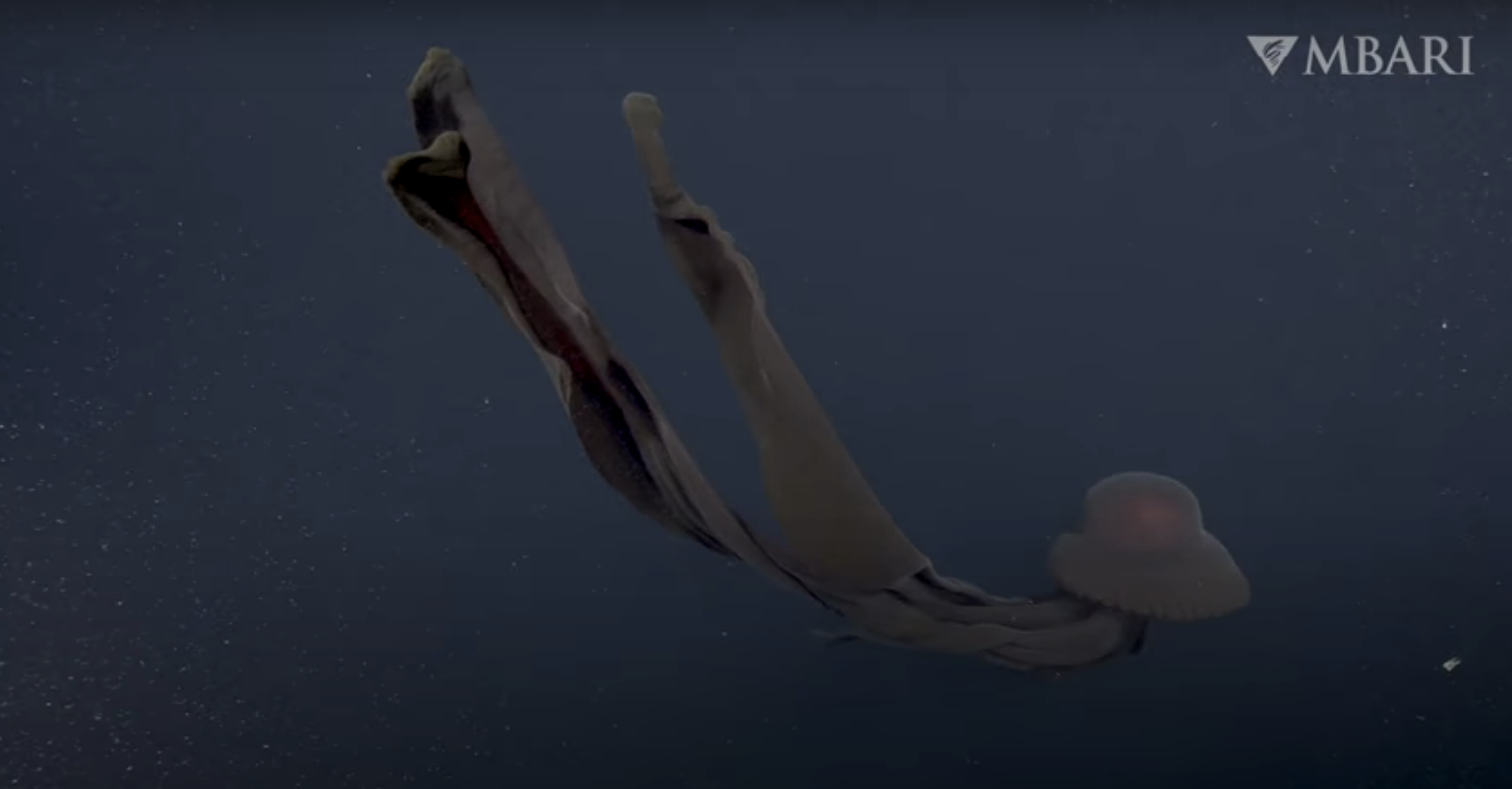 The giant phantom jelly was first discovered in 1899, and even though the species is thought to swim in oceans all over the world, bar the Arctic, by 2009 the creature had only been officially spotted 110 times in 110 years.

Before ROVs were invented, scientists used trawling nets to study creatures in the deep sea. But when a giant phantom jelly is scooped up and brought to the surface, MBARI researchers say its silky-looking frame turns to “gelatinous goo”.

Underwater robots are therefore some of the best ways for us to observe these elusive animals and learn more about them.

In 2004, an ROV actually caught sight of a bony, deep-water fish (Thalassobathia pelagica) living in and out of the giant phantom jelly’s shadow. The fish was even caught resting its belly right on the jelly.

The authors suspect the fish and the giant phantom jelly have a symbiotic relationship, which gives the fish shelter in an otherwise shelterless abyss.

Given that the arms of the giant phantom jelly are lined with stinging cells to stun prey, however, it’s not clear how this bony fish remains untouched, or what reward the jelly gets out of its presence.

Scientists suspect the diet of the giant phantom jelly consists of mostly plankton and small fish, but given its propensity for swimming in waters a thousand meters deep or more, we still know very little about how it survives.

Two sightings of the jelly in the Gulf of Mexico suggest the creature might hunt by clinging to subsea structures, so its arms are freed up to grab and trap prey, but that sort of behavior has never been directly witnessed.

Maybe the next time we stumble across a giant phantom jelly, it will be hungry enough to feed. Who knows when that will be.

Dinosaur-Killing Asteroid Produced Global Tsunamis Up to 2.8 Miles High
Biology Inspires a New Kind of Water-Based Circuit That Could Transform Computing
Pythons Can Swallow Almost Anything. A New Study Shows How
What Exactly Does It Mean to Die of ‘Old Age’?
‘Dark Data’ Is Leaving a Huge Carbon Footprint, And We Have to Do Something About It