Blobs of hot, dense material that curl around Earth’s core are much more widespread than previous research suggests.

A new method of analysing earthquake data has found even more of the previously detected continent-sized zones at the boundary between the planet’s core and mantle.

We still don’t know what these blobs are – they could be magma, molten iron leaking from the core, or something else -  but with a more complete, detailed map of where they are, we can better understand the geological processes occurring deep inside Earth’s interior.

The core boundary lies some 2,900 kilometres (1,800 miles) below Earth’s surface. That’s extremely out of reach, so if we want to know what conditions are like down there, we have to get creative. Luckily, Earth comes with a built-in tool for probing its own guts: earthquakes.

The way quakes and tremors propagate through different kinds of material inside the planet has allowed seismologists to reconstruct and map the composition of Earth’s interior.

This is how vast blobs of super-hot material were identified at the core-mantle boundary, decades ago.

Because the heat causes greater degrees of melting, these zones slow velocity of the earthquake waves right down, so they’re known as ultra low velocity zones.

But earthquakes can be an unsatisfactory tool, providing only trickles of information at a time. You have to wait for earthquakes; each earthquake only probes a narrow zone; and weaker signals can get lost in the broader noise.

To compensate for this problem, researchers from the University of Maryland, Johns Hopkins University, and Tel Aviv University turned to an unusual source: the stars.

Well, not actually the star – an algorithm for studying the stars. It’s called the Sequencer, and it’s designed to run through large astronomical datasets looking for patterns.

As it turns out, this algorithm can be tweaked to look at seismic data, too. A lot of seismic data.

The researchers fed it 30 years of data – around 7,000 seismograms of one particular type of seismic wave – looking for the seismic echoes indicating an ultra-low velocity zone that we may have missed in previous analyses. And bingo, they got a hit.

“By looking at thousands of core-mantle boundary echoes at once, instead of focusing on a few at a time, as is usually done, we have gotten a totally new perspective,” said geologist Doyeon Kim of the University of Maryland.

“This is showing us that the core-mantle boundary region has lots of structures that can produce these echoes, and that was something we didn’t realise before because we only had a narrow view.”

The results returned by the Sequencer revealed subtle changes in seismic waveforms from earthquakes in Asia and Oceania, suggesting a previously undetected ultra low velocity zone beneath the Marquesas Islands in the South Pacific. 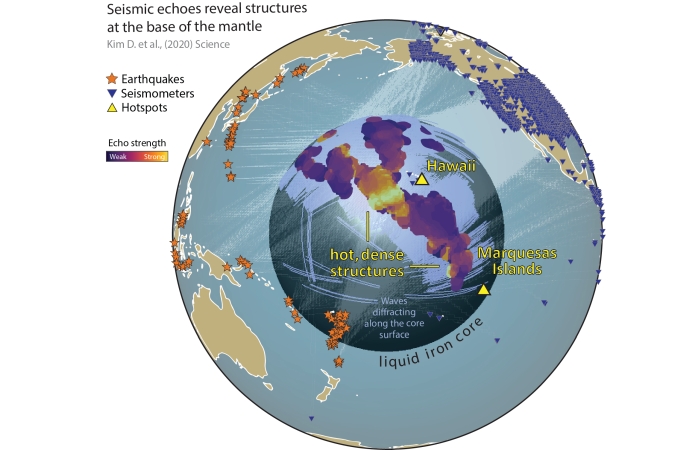 “We were surprised to find such a big feature beneath the Marquesas Islands that we didn’t even know existed before,” said geologist Vedran Lekić of the University of Maryland.

“This is really exciting, because it shows how the Sequencer algorithm can help us to contextualise seismogram data across the globe in a way we couldn’t before.”

In addition, the known ultra low velocity zone beneath Hawaii produced seismic echoes much louder than expected. This suggests that it is significantly larger than previous studies had estimated.

And the overall findings suggest that Earth’s guts are rather more blobby than we suspected.

“We found echoes on about 40 percent of all seismic wave paths,” Lekić said.

“That was surprising because we were expecting them to be more rare, and what that means is the anomalous structures at the core-mantle boundary are much more widespread than previously thought.”

Having demonstrated the Sequencer’s efficacy on one type of wave, the team’s techniques can now be applied to other types of waves and frequencies. This could help compile a new, high-resolution map of the Earth’s interior.

In turn, the physical properties this reveals could help geologists infer the chemistry and temperature of the structures, leading us closer to solving the mystery of what’s causing these strange, dense zones wrapped around the heart of Earth.

Webb is about to reveal the deepest view of the Universe ever, and we can’t wait
Sea Dragons Are Incredibly Strange Creatures, And We May Finally Know Why
These Hidden Passages May Have Been Used For Ancient Psychedelic Rituals
NASA launches nanosatellite in landmark mission to return to Moon
‘Cradle of Humankind’ fossils may be a million years older than previously thought