The wonderful mess of molecules that make up living things is so complex, biologists have overlooked an entire class of them – until now. This missed bit of biochemistry is neither rare nor hard to find; it’s just no one had thought to look for it before.

“This is a stunning discovery of an entirely new class of biomolecules,” said Stanford biochemist Carolyn Bertozzi.

“It’s really a bombshell because the discovery suggests that there are biomolecular pathways in the cell that are completely unknown to us.”

These are further divided into subtypes; for example, cellulose and sugars are carbohydrates. Then there are combinations between these groups, such as when different sugars combine with lipids in a red blood cell, forming the ABO blood types.

Glycans are chains of sugar molecules that can latch onto fats and proteins in a process called glycosylation, helping their transportation through a cell or folding into the correct shapes for their purpose. They are involved in many fundamental processes of biology, from development of embryos to recognition of pathogens.

This was a surprise because RNA was previously thought to function only inside cells – within their nucleus and fluid – whereas glycans are usually separated from them by membranes in a cell’s little organelles or on the cell’s surface.

“RNA and glycans live in two separate worlds if you believe the textbooks,” said Bertozzi. 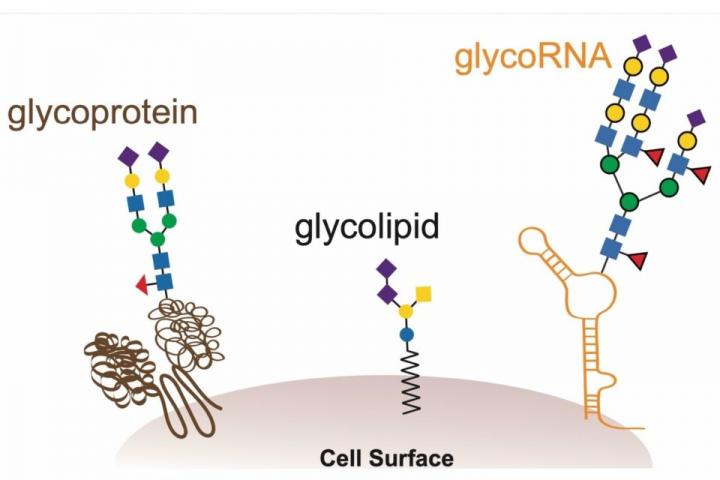 They worked this out by tagging glycol molecules with sialic acid in laboratory cells and extracting the RNA. Sure enough, some of the purified RNA had a sialic acid-labeled sugar coating.

The team then found the glycoRNA within every cell they checked – in human, mouse, hamster, and zebrafish – species separated by hundreds of million years of evolution. This suggests these molecules may have some sort of important biological function that’s been preserved across life on Earth.

Comparing the RNA bits of glycoRNA against RNA databases, Flynn and colleagues also discovered some of those molecules match RNAs linked to diseases.

“Some of the RNAs modified by glycans to form glycoRNA have a sordid history of association with autoimmune diseases,” explained Bertozzi.

It had previously been thought these bits of RNA were mostly inaccessible to our immune system because they were tucked safely away within our cells and only released through cell death.

“We found that glycoRNAs are on the cell surface, just like proteins and lipids,” Flynn told Nancy Fliesler at Boston Children’s Hospital.

“This is exciting because it means that glycoRNAs can participate directly in cell-to-cell communication. That was previously thought to be off-limits for RNAs, which had not been thought to play a role on the cell surface.”

We’re thinking a lot about this now but you could imagine scenarios where glycoRNAs may play roles in parallel to other cell surface biomolecules like glycoproteins/lipids but with different dynamics, stabilities, or configurations

The ability of glycans to link directly to RNA appears unlikely, so the team suspects there is a third, very small molecule acting as glue.

They point out that not all glycans contain sialic acid – which they used to detect the glycoRNA – so they likely missed more species to discover within this molecular class.

“When you find something brand-new like these glycoRNAs, they’re so many questions to ask,” said Flynn.

While glycoRNAs functions are still a mystery, their discovery will hopefully lead to many more answers soon, possibly about some people’s troublesome immune systems.

This research was published in Cell.

It’s Possible Neanderthals Evolved So They Wouldn’t Smell Their Own Stink, Study Finds
More Life Than We Ever Realized Could Survive in The Deep Dark of The Ocean
‘Polluted Realism’: How Monet’s Art Mirrors The Evolution of Smog
Scientists Are Making Catfish Hybrids With Alligator DNA For Us to Eat
A Seismologist Explains The Science of The Devastating Türkiye-Syria Earthquake