Make a crocodile out of taffy. Take its head and tug on it until its neck extends a good few meters from its body. If you squint, this could be what one odd-looking Triassic reptile called Tanystropheus looked like. More or less.

This animal’s assortment of ludicrously long fossilized neck bones has confused the heck out of paleontologists for nearly 170 years. By using CT scans to unpack the crushed skulls of the reptiles’ remains, researchers finally resolved some nagging questions surrounding this strange animal in August last year.

Specimens of Tanystropheus can reach more than 5 meters (16 feet) in length, with its tail making up roughly a third of its length, and its body maybe a quarter. The rest is all neck.

Why this reptile evolved such extended dimensions is a complete mystery. The fact nobody could figure out whether it preferred to be submerged in water or to lumber about on land only made it harder to settle on any conclusions.

Part of its oddness is the shape of the neck bones. Unlike those in a snake or lizard, the cervical vertebrae in Tanystropheus fossils are stretched out like a giraffe’s. In fact, when its remains were first uncovered in 1852, the scattered bones were assumed to be the elongated wing bones of a flying pterosaur.

Not all of the individuals we’ve unearthed are crocodile-sized, either. A number are far smaller, prompting palaeontologists to question whether some of the specimens in their archives belong to juveniles, or represent a completely different species.

This is a common problem in palaeontology – the diminutive fossil of a dwarf species can be almost identical to the immature bones of a youngster. Separating them requires looking for clues on whether the skeleton has yet to reach full size or still has some growing to do.

Thankfully, such clues can be found deep inside the fossils. Just as the rings inside a tree’s trunk present a record of their age, bones can do the same thing.

To find these, Rieppel and his colleagues used X-rays on an assortment of Tanystropheus skeletons, turning the scans into 3D models through high-resolution computerized tomography (CT) technology.

“The power of CT scanning allows us to see details that are otherwise impossible to observe in fossils,” said lead author Stephan Spiekman, an expert in Triassic reptile evolution at the University of Zurich.

The growth rings revealed the smaller Tanystropheus bodies did indeed belong to adults, making it fairly clear that what the researchers had on their hands were two separate species.

To distinguish them, the team named the bigger one T. hydroides, after the hydra in Greek mythology. Its smaller cousin kept the original species name of T. longobardicus.

Transforming the scans into digital models also provided the researchers with a way to rearrange the squashed bones into a clearer configuration, making it far easier to get a good look at all of the creature’s anatomy.

“From a strongly crushed skull we have been able to reconstruct an almost complete 3D skull, revealing crucial morphological details,” said Spiekman.

With all of its bone fragments in their proper place, it looks like Tanystropheus would be well at home in the water after all.

The reptile’s skull has its nostrils perched on top, much like a crocodile’s snout – just the thing for an ambush predator to keep a lung full of air while waiting for a meal to pass by. 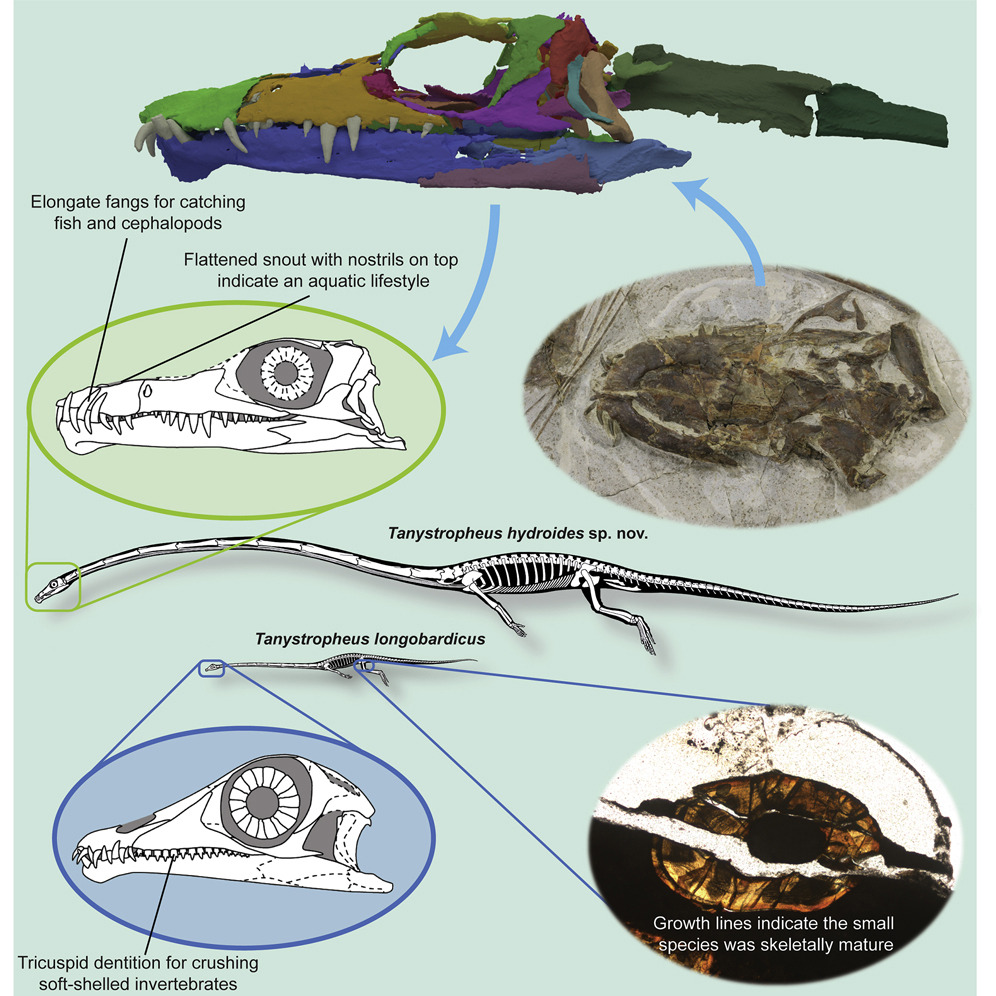 What had been a jumbled pile of pointy teeth can also be seen forming a rather efficient trap for snatching a cephalopod, at least for the king-sized species.

“The small species likely fed on small shelled animals, like shrimp, in contrast to the fish and squid the large species ate,” said Spiekman.

“This is really remarkable, because we expected the bizarre neck of Tanystropheus to be specialized for a single task, like the neck of a giraffe. But actually, it allowed for several lifestyles. This completely changes the way we look at this animal.” 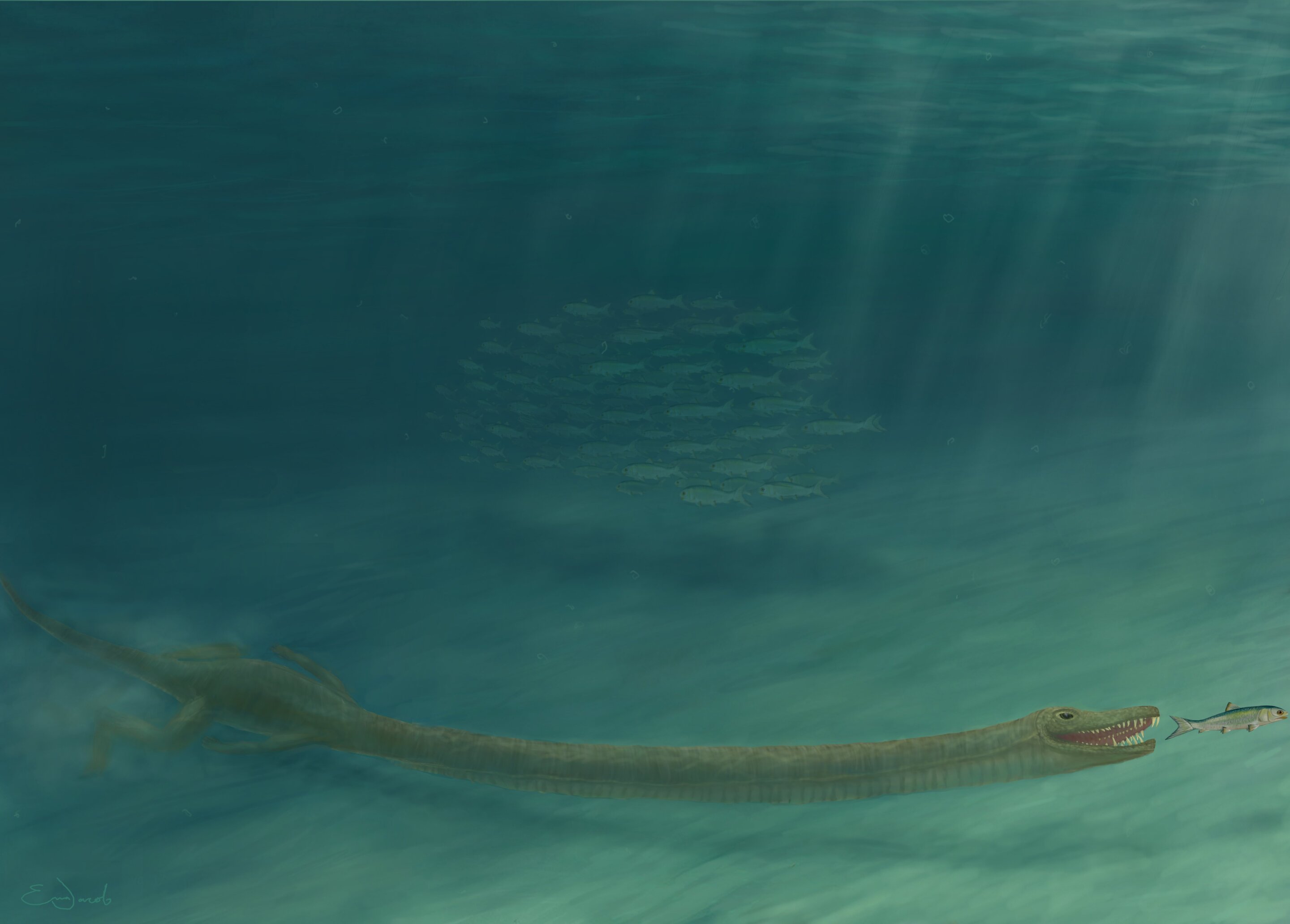 The fact that the two, very similar species had such different ways of using their long bodies made it much easier for them to exist in the same habitats, sharing their environment without competing for the same food sources.

We can almost imagine the animal’s squat, croc-like body lying against the floor of a shallow coastline some 242 million years ago, its head rising high up to the surface so its nostrils can siphon down air, its bristling mouth slightly agape in anticipation of a stray squid to stumble by.

As familiar as the scene feels, Tanystropheus is still one weird critter.

This research was published in Current Biology.

A version of this article was first published in August 2020.