Skin is your largest organ. There are about 2 square metres (22 square feet) of it enveloping you right now, and it’s not the shape we thought it was.

In fact, scientists have just discovered an entirely new geometric shape previously unknown to science or mathematics, and it looks like it’s been hiding in your skin all along. By which we mean, in epithelial cells, the building blocks of the structural tissue forming our external (and internal) skin layers.

These epithelial cells are some of the most important cells early in life, helping to build structures in developing embryos that ultimately become all our different bodily organs.

As such, this epithelial tissue – made up of millions upon millions of these tiny cells squashed together – doesn’t just make up our external skin, but also lines our internal organs.

Scientists have never fully understood what shape these individual cells were, but it’s mostly been assumed they resemble column-like prisms, or the ‘bottle’ shape of a truncated pyramid, called a frustum.

But when scientists used computer models to simulate the 3D packing of epithelial cells up close, they got a surprise.

“During the modelling process, the results we saw were weird,” explains bioengineer Javier Buceta from Lehigh University.

“Our model predicted that as the curvature of the tissue increases, columns and bottle-shapes were not the only shapes that cells [developed].”

In addition to the usual suspects, Buceta’s team noticed a strange shape they didn’t recognise. 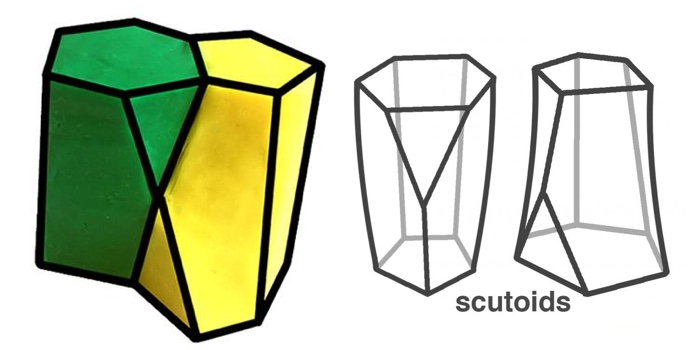 It kind of looks like a prism, but while one end of the prism has five edges, the other actually has six: a geometric quirk made possible by a Y-shaped split dividing one of the prism’s edges into two, creating a mini-triangle.

This bizarre ‘twisted prism’ may sound like something M.C. Escher might have experimented with, but according to the team, the novel shape has never been previously described in scientific literature.

“To our surprise, the additional shape didn’t even have a name in math!” Buceta says.

“One does not normally have the opportunity to name a new shape.”

Ultimately, the researchers termed their new discovery the ‘scutoid’, in homage to the scutellum – a posterior portion of the thorax in some insects, which resembles the same mini-triangle shape. As for why the scutoid exists at all inside skin, the team says the twisted prism enables a more energy-efficient shape as epithelial cells bend.

“When tissue curves it tends to minimise energy, to be more stable,” explains one of the team, cellular biologist Luisma Escudero from the University of Seville in Spain.

“And for that reason, our biophysical data indicates that what these cells do is adopt a scutoid shape.”

Once the researchers identified the scutoid in their modelling, they looked to verify the discovery in nature, finding preliminary evidence of the twisted prism in the epithelial tissue of both fruit flies and zebrafish.

But since all animals contain this kind of skin cell, the team thinks the shape’s identification could be a major turning point in how we think about the epithelium.

While a lot more research will be needed to confirm just how widespread the scutoid really is inside creatures (including you), the researchers contend their findings will pave the way to a unique new understanding of the three-dimensional organisation of epithelial organs.

“For example, if you are looking to grow artificial organs, this discovery could help you build a scaffold to encourage this kind of cell packing, accurately mimicking nature’s way to efficiently develop tissues,” says Buceta.

“We have unlocked nature’s solution to achieving efficient epithelial bending.”

The findings are reported in Nature Communications.

This Species of Carnivorous Plant Evolved Into a Toilet And Is Now Winning at Life
Shooting Tiny, High Speed Bullets at a Spacecraft Could Speed Up Travel to The Stars
Scientists Have a Plan to Turn Earth Into a Giant Observatory
An Expert Explains Why The Radioactive Water Stored at Fukushima Should Be Released
People Who Don’t Exist Look More Real Than Actual People, Study Finds