The hailstone is so massive it even stunned meteorologists.

“It’s incredible,” said meteorologist Matthew Kumjian from Penn State University in the US. “This is the extreme upper end of what you’d expect from hail.”

The hefty ice lump smashed down from a supercell thunderstorm in Argentina two years ago, in the heavily populated town Villa Carlos Paz. In a recently published study, Kumjian and colleagues have concluded the hailstone is possibly the largest ever recorded – estimated to be up to 23.7 centimetres (over 9 inches).

However, as its dimensions were only gleaned from video evidence (below, 11 seconds in), and not direct measurements, they can’t conclusively say it’s the largest to be recorded.

Another hailstone from the same storm, recorded by local Victoria Druetta, came in at 18 centimetres (7.1 inches), after she saw chunks of it smash off during the impact of its landing. 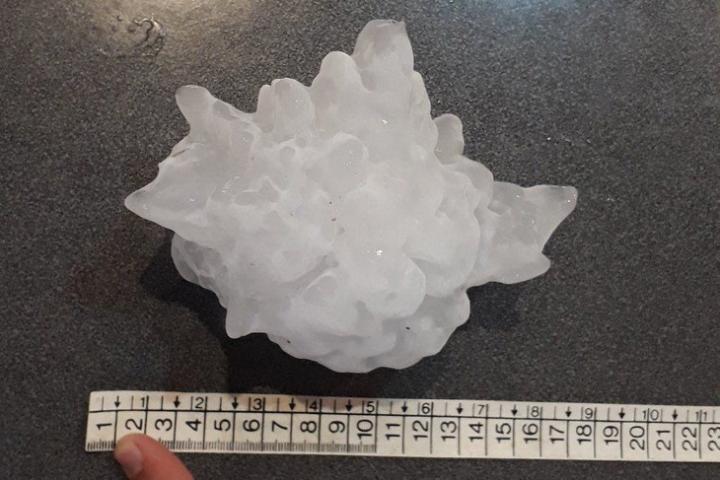 Such horrific hailstones require special conditions – massive storms with powerful updrafts to keep them aloft long enough to pack on that weight. They start as raindrops sucked above freezing altitudes in a storm, and as they’re tossed about up there, layers of supercool liquid water freeze onto them – the twists and turns moulding their lumpy lobed structures.

Such updrafts and windfields that twist and strengthen with height are promoted by warm and humid conditions, and radar information from this recent study showed this large hail fell close to where the main updraft occurred.

The examined hail also showed substantial wet growth, which occurs in the lower part of hail growth zones within the storms, suggesting the updraft there must be particularly strong for these giants to obtain their size.

As fascinating as this may be from a safe distance, hail of course is also extraordinarily dangerous, and more so the larger it gets.

“Hail can cause significant damage to property and agriculture, as well as injuries or even deaths,” the researchers wrote in their paper.

They proposed officially classifying hailstones larger than 15 centimetres (6 inches) as “gargantuan”, to help warn us all of their damaging potential.

“Anything larger than about a quarter in size can start putting dents into your car,” Kumjian said. “In some rare cases, 6-inch hail has actually gone through roofs and multiple floors in houses. We’d like to help mitigate the impacts on life and property, to help anticipate these kinds of events.”

The team searched for warning signs leading up to the hailstorm but found a “lack of indications of an extreme event in the pre-storm environment, numerical model forecasts, or radar imagery collectively,” and pointed out we need a lot more research in this area.

With predicted increases in the severity of thunderstorms in the future, understanding the dynamics of these giant stones of ice may soon become more critical. So far, research on future hailstorms suggests some areas may see increases in hail frequency while others a decrease, but that there will likely be a shift from small to large hailstones occurring with increasing global temperatures.

Penn State meteorologist Rachel Gutierrez explains volunteers can help scientists better understand the risks of hailstorms by reporting and providing accurate recordings of gargantuan hailstones, including the time and location of its fall and its weight.

This research has been published in the Bulletin of the American Meteorological Society.

Colliding Neutron Stars Created a Neutron Star We Thought Too Heavy to Exist
Pendants From Stone Age Graves Revealed to Be Made of a Gruesome Material
Roman Coins Once Thought to Be Fake Reveal a Long Lost Historical Figure
Emperor’s Secret Code Cracked After Five Centuries, Revealing His Fears
Here’s How NASA Determines Which Applicants Make It to Be Astronauts