Scientists in the Galápagos have observed something amazing: the evolution of a completely new species, in the wild, in real-time. And it took just two generations.

Back in 2017, genomic sequencing and the analysis of physical characteristics officially confirmed the new species of Darwin’s finch, endemic to a small island called Daphne Major in the Galápagos. Its discoverers nicknamed it Big Bird.

There are at least 15 species of Darwin’s finches, so named because their diversity helped famed naturalist Charles Darwin figure out his theory of evolution by natural selection – that is, mutations can help species become better adapted to their environment, and be passed down to subsequent generations.

It’s two of these species that came together in what is called species hybridisation to create an entirely new one. 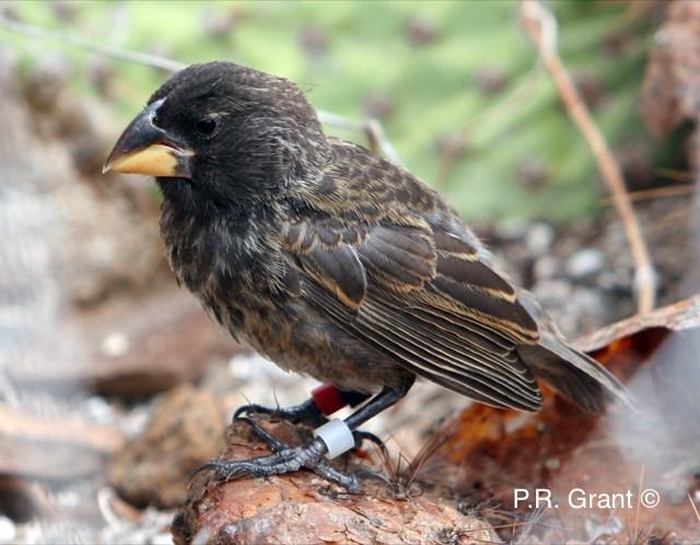 While on expedition on the Daphne Major island, Peter and B. Rosemary Grant, biologists at Princeton University, noticed the presence of a non-native interloper, Geospiza conirostris.

It’s also known as the large cactus finch, and is native to other Galapagos islands, namely Española, Genovesa, Darwin, and Wolf.

As one of the larger species of Darwin’s finches, and with a different song than the three native Daphne Major species, the newcomer – a male – stood out.

“We didn’t see him fly in from over the sea, but we noticed him shortly after he arrived. He was so different from the other birds that we knew he did not hatch from an egg on Daphne Major,” Peter Grant said.

But then it mated with two females of one of those native species, Geospiza fortis, the medium ground finch. And the mating produced offspring.

But hybrid species are often sterile, or reproduce with difficulty – and that did not prove to be the case with these new chicks. A new lineage began – it had to.

The birds had a different song from G. fortis, as well as different beak size and shape, and these are what the finches use to attract mates. Reproductively, the new species was completely isolated, and had to mate within its own kind to survive.

But it was an uphill battle. During droughts on the island in 2002-2003, when the new lineage was in its fourth generation, all but two of the birds died.

“When the rains came again, the brother and sister mated with each other and produced 26 offspring,” Rosemary Grant said in an interview last year.

“All but nine survived to breed – a son bred with his mother, a daughter with her father, and the rest of the offspring with each other – producing a terrifically inbred lineage.”

Because the hybrid finches were bigger than the native populations, they were able to access previously unexploited food choices, and survive. At the Grants’ most recent visit to the island in 2012, they counted 23 individuals and 8 breeding pairs of the birds.

This success means, the researchers noted, that hybridisation could have occurred many times in Darwin’s finches in the past, resulting in new species that either became extinct or evolved to become the species we know today.

“A naturalist who came to Daphne Major without knowing that this lineage arose very recently would have recognised this lineage as one of the four species on the island,” said Leif Andersson of Uppsala University in Sweden, who conducted the genetic analysis.

“This clearly demonstrates the value of long-running field studies.”

Charles Darwin would have been delighted.

If you want to read more about the Grants’ work, you can’t go past the Pulitzer-winning The Beak of the Finch.

And you can find the paper in the journal Science.

A version of this article was first published in November 2017.

This Small Australian Marsupial Is Quite Literally Dying For Sex
A Billion-Dollar Biotech Company Plans to Bring The Dodo Back to Life
An Incredible Thing Happens When Dolphins And Humans Team Up
Stunning Green Comet Will Be Closest to Earth Today, at Peak Brightness
AI Predicts We’ll Breach Our Climate Goal in Just 10 Years