Nothing quite says ‘look at me!’ like an extravagant set of tail feathers. Plenty of modern birds sacrifice agility to a chance to grab attention, but examples of among relatives in the fossil record have been harder to come by.

Scientists have now described the remains of a 120-million-year-old feathered dinosaur roughly the size of a bluejay, one with an extremely long and extravagant behind.

The remarkably-detailed fossil was found in northeastern China and named Yuanchuavis (Yuanchuavis kompsosoura) after a phoenix-like bird in Chinese mythology.

It’s the first time a bird-like fossil from the Mesozoic era has been discovered with such a complex array of tail feathers, featuring both a grey fantail and a pair of long black plumes.

The two extensive, dark feathers stretch roughly 30 centimeters (12 inches), about 1.3 times longer than the bird’s body. Together with the fan of shorter feathers, they create a pintail that the authors say “strongly resembles” those of modern sunbirds and quetzals, which use their ostentatious behinds to attract mates.

The discovery suggests even the earliest birds were using their feathers to do something similar.

But being sexy can have its burdens. A tail as large and flashy as the one seen on Yuanchuavis would have made flying and evading predators a whole lot trickier.

Clearly, the risks of the booty call were worth it.

“Scientists call a trait like a big fancy tail an ‘honest signal,’ because it is detrimental, so if an animal with it is able to survive with that handicap, that’s a sign that it’s really fit,” explains paleontologist Jingmai O’Connor from Chicago’s Field Museum.

“A female bird would look at a male with goofily burdensome tail feathers and think, ‘Dang, if he’s able to survive even with such a ridiculous tail, he must have really good genes.'” 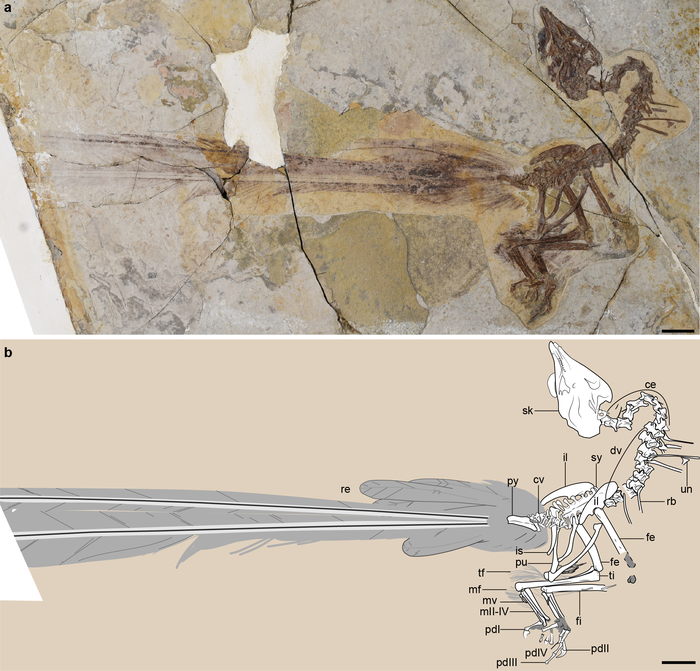 The fossil of Yuanchuavis with a corresponding illustration of the tail feathers. (Wang et al., Current Biology, 2021)

Yuanchuavis belongs to a group of Mesozoic avians called enantiornithes or “opposite birds”, which lie on their own evolutionary branch somewhere in between the ancestor of modern birds and extinct non-avian dinosaurs.

Enantiornithes are actually a sister clade to ornithuromorpha, to which all living birds belong. After coexisting side by side for about 65 million years, only one of these clades survived the mass extinction event that wiped out most dinosaurs.

Figuring out why one clade of avians survived while the other didn’t could allow us to better understand how modern birds have been so successful at getting by in this world.

Way back in the Mesozoic era, the ancestors of modern birds did not seem to have long tail ornaments like those found on Yuanchuavis, although they do show fan tails in the fossil record.

In fact, for many years, fan tails were thought to have evolved exclusively in ornithuromorphs. Recently, however, several fossils of enantiornithes have been found with this feature as well.

Yuanchuavis is even more peculiar. Its tail’s mix of fantail and paired plumes is a feature no other bird in its clade has been found to possess.

The authors can’t be sure why Yuanchuavis evolved such a complex tail, but given how aerodynamically inconvenient the feathers would have been, they suspect these plumages were shaped by sexual selection.

In a densely forested environment, where most enantiornithes are thought to have lived, there are lots of things to hide and flee behind. A cumbersome tail might not be so bad if it’s pretty enough. Today, that’s where we find most birds of paradise.

But in the more open, semi-aquatic environments where most ornithuromorphs in the Mesozoic lived, the trade-off between sex and survival might not have been as worthwhile.

The differing landscapes could be part of the reason why enantiornithines seemed to have evolved pintails earlier than their sister clade.

“It is well known that sexual selection plays a central role in speciation and recognition in modern birds, attesting to the enormous extravagant feathers, ornaments, vocals, and dances,” explains Wang.

“However, it is notoriously difficult to tell if a given fossilized structure is shaped by sexual selection, considering the imperfect nature of the fossil record. Therefore, the well-preserved tail feathers in this new fossil bird provide great new information about how sexual selection has shaped the avian tail from their earliest stage.”

Behold, The Epic Last Images Taken by NASA’s Asteroid Redirection Test Spacecraft
Fossil-Filled Australian Caves May Be 500,000 Years Older Than We Thought, Study Finds
A New FRB Signal Has Buzzed Nearly 2,000 Times in Just Two Months, Raising a Mystery
Ancient Maya Cities Appear to Have Been Riddled With Mercury Pollution
Ancient Burial of a Young Girl Shows How We Carried Our Babies 10,000 Years Ago