Tangle-web spiders are little creatures with big appetites. New research has found some species of this family can tweak their silk traps to lift extremely large prey – sometimes up to 50 times heavier than themselves – suspending their meal many centimetres off the ground.

Considering the size of these hunters, many of which are smaller than a thumbnail and weigh little more than a tiny fraction of a gram, that’s quite a powerful system and shows a unique ability for spiders to adapt and think on their eight feet.

When an unsuspecting bug, rodent, or lizard accidentally sticks to the spider’s dangling ‘trigger’ thread, these clever hunters jump into action, spinning out an extra line of silk at just the right tension to catapult their heavy prey higher into their nest than their muscles might manage alone.

During filming, in fact, the smallest spider, which weighed a mere 0.01 grams, slung up the heaviest prey of the lot: a 0.5 gram cockroach (Blaptica dubia). This particular species is known as Steatoda triangulosa or the Triangulate cobweb spider, but it’s not the only one that can do this.

Tangle-web spiders, or Theridiid spiders, are renowned for their remarkable booby traps, and many species have been found creating similar slingshots to the one described above, especially when prey is too big to carry using muscles alone.

When dwarfed by their appetites, some Theridiid spiders have been caught spinning a variety of silk into a simple ‘machine’ to make things easier for themselves.

Spider silk is an incredible elastic structure capable of absorbing or releasing energy when it loosens or contracts, and arachnids have come up with a whole bunch of innovative ways to use this unique material.

If a finely-tuned spider thread is relaxed, for instance, the silk releases its stored energy and becomes more mobile, creating a lifting motion like an external muscle.

It’s the perfect tool for suspending small prey in just one motion, without much work from the spider.

Yet not all prey are the right size. Historically, there have been several records of big prey getting trapped in these jib-like structures, including a mouse, winched by its tail, and a snake, suspended by its rear end – its jaws clamped firmly closed with more silk.

Even lizards have been found hanging face down from the trap of a Triangulate cobweb spider. 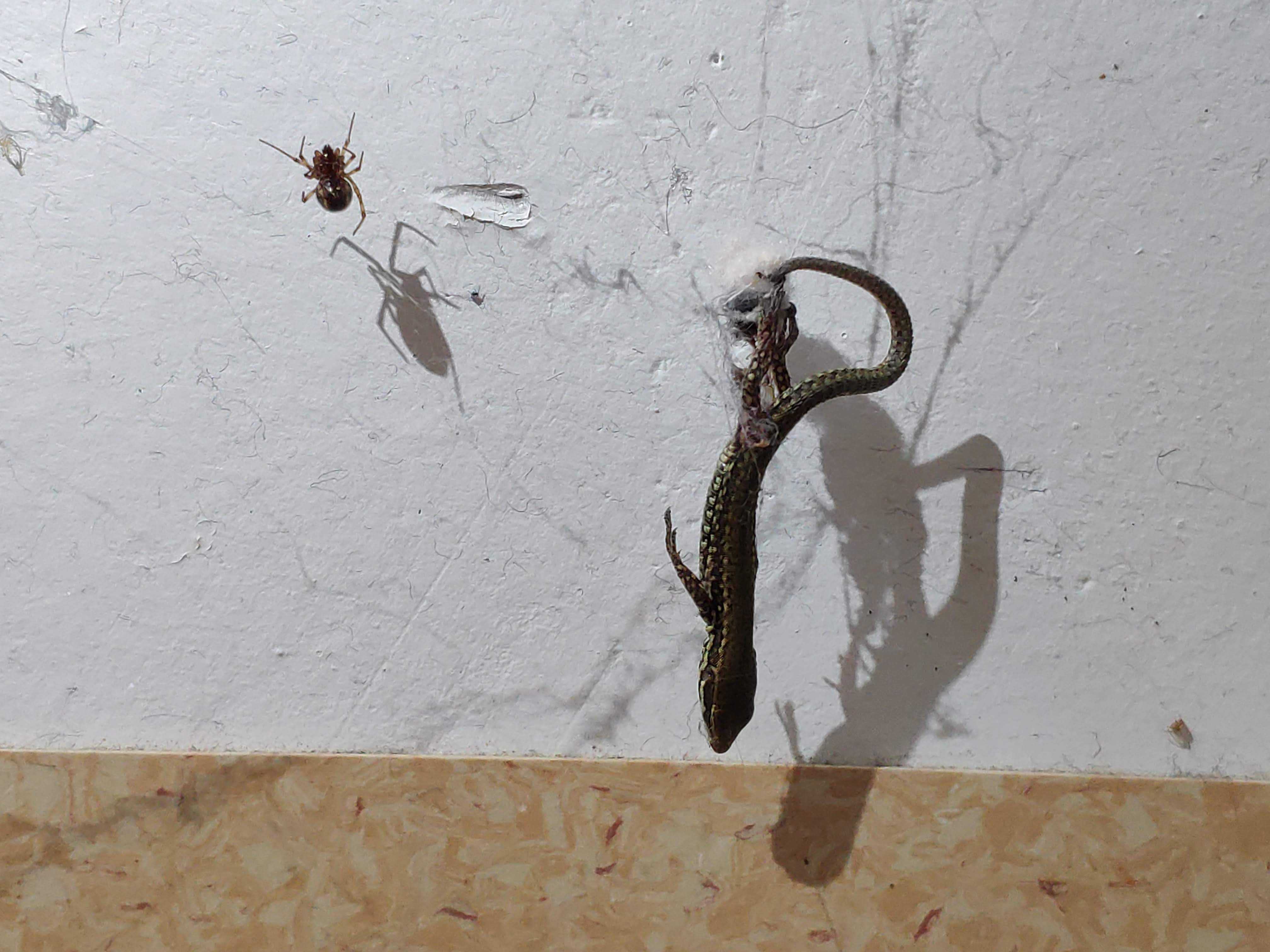 Tangle-web spider hoisting a lizard up to its web. (Emanuele Olivetti )

These animals are not too large to get stuck to the spider’s trigger thread, but they are too heavy for the spider to carry on its own. The hunter must therefore weave extra, pre-stretched strings from the web to its prey, scrambling back and forth as it slowly hoists its meal up.

The study relies on five individual spiders in total, one species of Steatoda paykulliana, and four species of the Triangulate cobweb spider.

Gluing silk samples onto a paper frame with a small window for a spider den, the team watched and filmed as all five arachnids weaved a trigger thread near the bottom of the web and sat back waiting for prey.

A live Dubia roach (Blaptica dubia) was then introduced to the scene. If the roach walking by was small enough, one sticky thread was all that was needed for the spider to snap up its meal. The hunter simply watched from above.

Larger bugs, on the other hand, required more finesse. In this case, the elastic energy from the capture thread is only what started the process of lifting, the authors found.

Watching nearby, the spider then scrambles to reach its prey, wrapping it in aciniform silk and using venom to stop its struggles. The hunter then attaches new pre-tensioned silk threads to the creature from the web, applying “a sum of tension that overcomes the prey’s weight“.

But only very gradually. These finely tuned elastic threads only lift the large prey a tiny amount at a time. The spider must then attach more threads and start the process all over again, lifting at a pace no faster than 0.01 centimetres (0.04 inches) per second.

Even when the prey was finally hoisted up to the main frame, the spider’s job was not done. Once there, the hunters were forced to remove several threads in the way to make room for their visitor.

“This ended when the prey was close to the main frame of the tangle web, where the den of the spider lies but the dense network of silk fibres obstructs the movements of the [prey],” the authors write.

In total, the spiders used five different forms of silk to capture these big prey, including one for trapping, two for support, a cement-like joiner and a fifth silk to wrap up their meal. 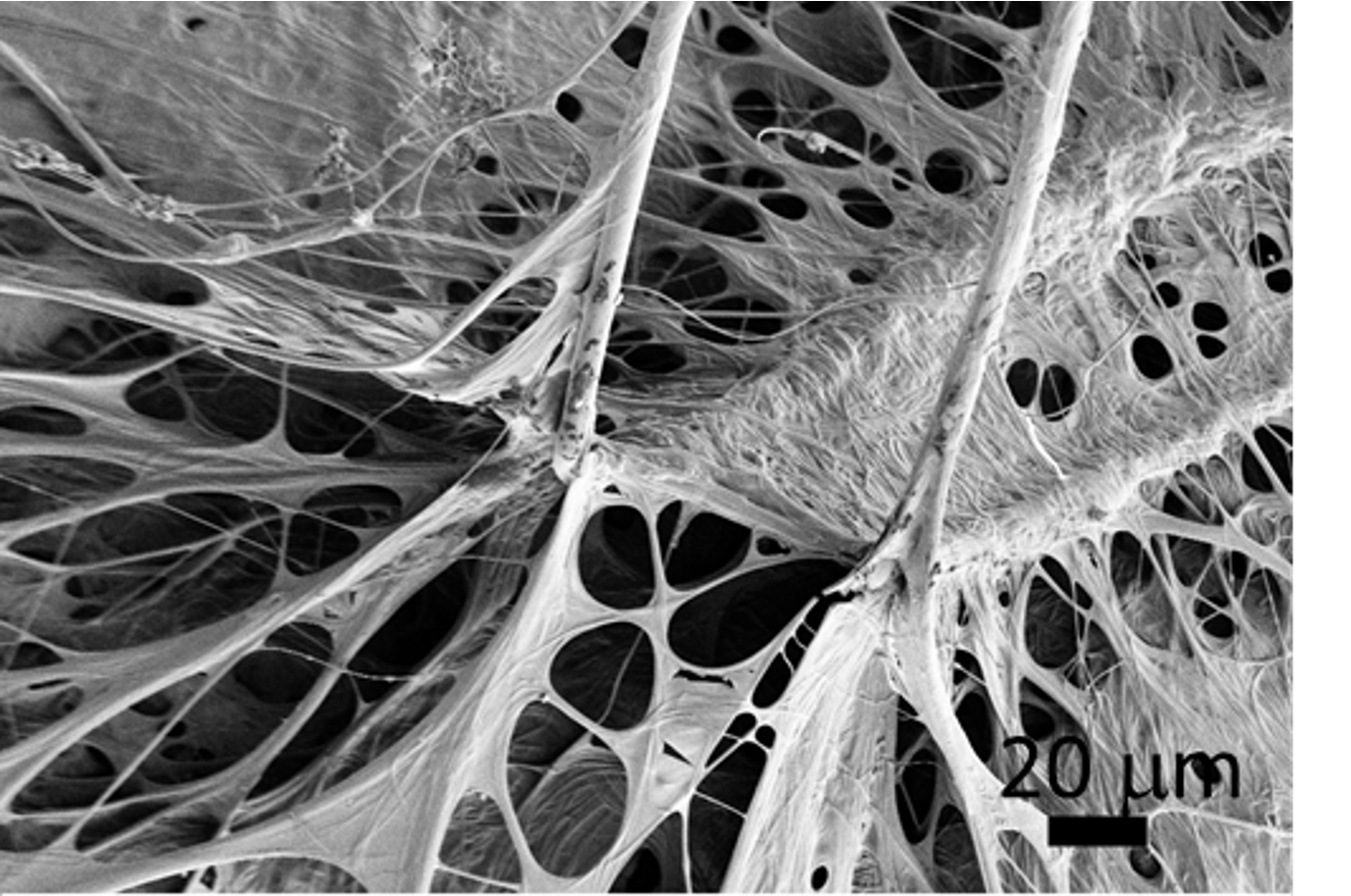 “Thus,” the authors conclude, “it seems that Theridiid spiders are able to use the web and their silk as an external tool to hunt, which can be tuned by the arachnid. “

The insights are still preliminary – based on a small number of individuals from only a couple species – but just like that first trigger thread, they’ve helped raise our understanding of spider silk and its role in spider life and evolution.

If these tiny predators were given a larger cobweb to start with, the authors think it’s possible they could have captured prey even larger.

The study was published in the Royal Society Interface.

Black Swans Could Be Entirely Wiped Out by a Single Virus, Scientists Warn
Astronomers Just Realized The Milky Way Is Too Big For Its Surroundings
This Physicist Says Electrons Spin in Quantum Physics After All. Here’s Why
Mysterious ‘Zone of Uncertainty’ Inside The Brain Reveals a Surprise
Newly Discovered Fossil Reveals Hundreds of Teeth ‘Never Seen Before in a Pterosaur’