Even when we mean them no harm, deer tend to be wary of humans. When we approach, they usually raise their heads, prick their ears and stand very still. It’s how these creatures stay vigilant against predators.

But what happens when humans are always around?

Researchers in Pennsylvania have found the presence of people threatens white-tailed deer so much, they basically stop showing vigilant behavior.

“That was the surprising thing about my research – when fawns perceive that there is so much danger coming from so many sources, their behavior seemed like they just relaxed, like there’s no point in being ready to hide or flee,” says ecologist Asia Murphy from Pennsylvania State University.

“I saw that in older deer, too. Like so much constant stress leaves them burned out.” 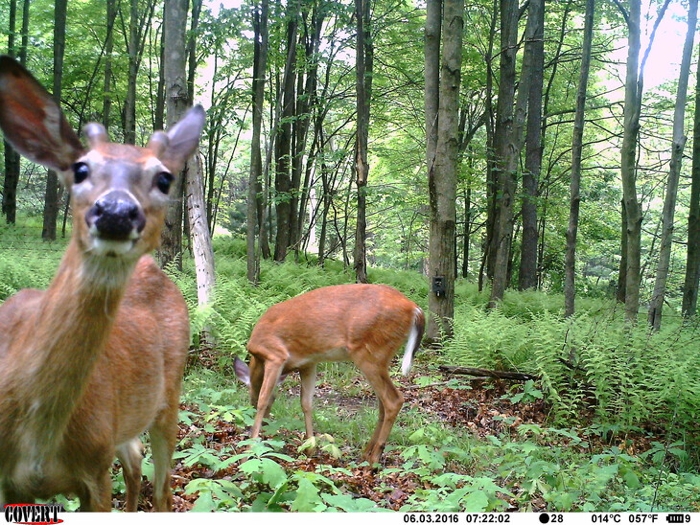 When Murphy and her colleagues set up camera traps in three public forests of Pennsylvania from May to September (in 2016-2017), they noticed deer in the untouched forest acted more defensively, despite having less encounters with predators.

More than 10,000 photos show that it was these wild deer, free from humans, that usually stood vigilant throughout the day, watching for predators wherever they went. On the other hand, deer in the forests surrounded by human agriculture and housing were more inured to predators.

And that was the case even though the threat from predators was higher. In broken forests, the authors found young and vulnerable fawns were more likely to cross paths with coyotes and bobcats.

“Less than half of whitetail fawns live to see their first birthday, and many are killed by predators, such as coyotes, black bears, and bobcats,” says Murphy.

“Fawns instinctively ‘know’ they are in constant danger.”

Add humans to the mix and the danger hits an overwhelming point. The constant stress, researchers say, might ultimately take away the animal’s energy and leave them looking more ‘relaxed’ than they should.

That might sound counterintuitive, but according to the risk allocation hypothesis, when a high-risk predator situation is rare, prey are more likely to show intense vigilance. On the other hand, when there is a prolonged high level of risk, prey tend to spend less time defending themselves from predators.

Only at certain times of day, when predators are especially on the prowl, do their ears prick up. The rest of the time, their natural vigilance behavior is ‘dulled’.

This is exactly what researchers found when they compared deer across various parks in Pennsylvania. In more human-disturbed environments, female deer and fawns only really showed vigilance behaviors during specific hours of the day – the times when their predators are most active. The rest of the time, they dampened their stress levels.

Some male deer actually appeared more concerned by humans than coyotes – a possible hangover from the hunting season.

Even when it’s not hunting season, however, the mere presence of our species seems to be shifting wildlife behavior and changing interactions between predators and prey in certain parts of the US.

A study in 2016, for instance, found something similar. In parts of the eastern US with high levels of human recreation, researchers noticed deer were much less vigilant, likely because they have grown accustomed to our presence.

It could be that deer have grown less scared of our species over time, but given that hunted and non-hunted deer showed the same lack of vigilance in our presence, that’s probably not the case.

Instead, researchers think it’s likely the stress of our presence, which also drives an overlap in activity time with other predators, has exhausted these creatures so much, they can’t lift up their heads or stay on guard as often as they used to. It’s just too taxing, and won’t reduce the threat enough to be worthwhile.

“We posit that a consistently high level of perceived risk from humans may be the reason why studies – including ours – fail to detect anti-predator and avoidance behaviors,” the authors write.

The study was published in the Journal of Animal Ecology.

Mysterious Medieval City in Africa Had a Genius System to Survive Drought
People Who Don’t Exist Look More Real Than Actual People, Study Finds
Are Your Cats Playing or Fighting? Researchers Think They Can Tell The Difference
Dogs Can Be Aggressive For Lots of Reasons, And One of Them Is You
There’s a ‘Lost City’ Deep in The Ocean, And It’s Unlike Anything We’ve Ever Seen