History tells us that in the year 365 CE, the Mediterranean region was rocked by a thunderous earthquake estimated as a magnitude 8.0 or higher. The quake and subsequent tsunami killed tens of thousands of people, destroying Alexandria in Egypt and several other cities.

However, new research now suggests some previous assumptions about the quake and its seismic legacy might not be correct – and the findings could mean drastic changes for earthquake and tsunami modeling in the region today.

Up until now, the general consensus has been that the Hellenic subduction zone underneath Crete caused the giant quake, but the latest evidence suggests a cluster of ‘normal faults‘ offshore of western and southwestern Crete may have been behind the uplift of vast stretches of exposed ‘fossil beach’ along the Crete coastline. 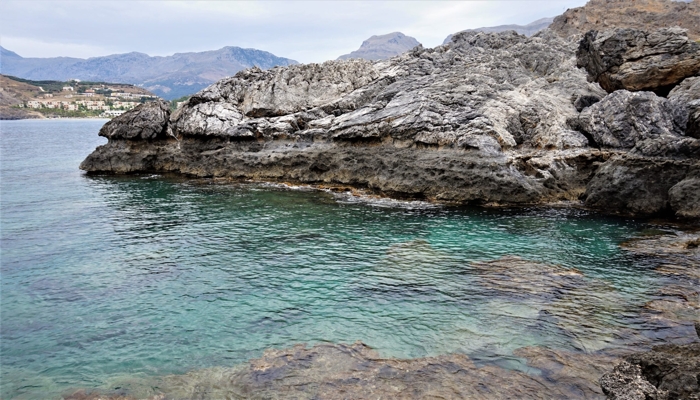 “Our findings collectively favor the interpretation that damaging earthquakes and tsunamis in the Eastern Mediterranean can originate on normal faults, highlighting the potential hazard from tsunamigenic upper plate normal fault earthquakes,” the researchers write in their paper.

By studying fossil shorelines exposed by seismic uplift and applying radiocarbon dating techniques, researchers were able to work backwards to figure out with more precision how the ground actually shifted to produce the ruptured landscape.

The rise of the ground around the beaches – to a height of some 9 meters, or nearly 30 feet in some places – exposed and killed off huge amounts of marine organisms, the shells and skeletons of which reveal vital clues.

Vermetids and corals were gathered from a total of eight sites around Crete, giving the researchers 32 new data points in terms of geological ages. Computer modeling was then used to fit these dates and locations in with possible seismic activity, with historical writings about earthquakes in the area also taken into consideration.

The results suggest a series of quakes in the first centuries of the millennium likely caused the uplift, prior to the legendary 365 CE quake, which was previously assumed to be the culprit.

The new hypothesis is backed up by some other evidence, including the apparent abandonment of the ancient harbor at Phalasarna around 66 CE – though the research team admits that the data is by no means conclusive at this stage.

In other words, normal faults in the region might be capable of more destruction than was previously thought, and the 365 CE earthquake – which doesn’t seem to have exposed these sections of fossil beach after all – may have originated from normal faults, not the Hellenic subduction zone as many used to think.

This isn’t just historical curiosity either: it means that modern-day earthquake predictions and modeling might need to be adjusted.

While the danger from the Hellenic subduction zone might be less than previously thought, the danger from multiple normal faults could be greater than we realized – especially in terms of the clustered timing, which has been noted in studies before.

The researchers want to see more seismic measurements and recordings taken around the Mediterranean region, particularly away from shorelines (where the bulk of the data from this study was taken).

“Based on these findings and the better consistency with the long‐term record of crustal extension in the region, we favor a normal faulting origin for the 365 CE and earlier earthquakes,” conclude the researchers in their published paper.

“However, we note that more research, and especially geophysical imaging, is required to adequately understand the tectonics and seismic hazard of the Hellenic subduction zone.”

The research has been published in AGU Advances.

Astronomers Studied More Than 5,000 Black Holes to Figure Out Why They Twinkle
AI Predicts We’ll Breach Our Climate Goal in Just 10 Years
Astronomers Find What May Be a Habitable World 31 Light-Years Away
Orcas Are Contaminated With a Forever Chemical Associated With an Unlikely Product
Alarming Spread of Bird Flu Continues as More Species Infected