As an unexplored legend of the deep, the Great Blue Hole in Belize is said to hold deep-sea monsters and Maya mysteries.

The first expedition to the bottom has turned up neither of those wonders, but what scientists and explorers have discovered is fascinating - even though it is not, as several outlets have claimed, an unexplained mystery.

In December 2018, after diving 125 metres (410 feet) to the very bottom in a specially equipped submarine, the team noticed something strange. There, on the sand, were a set of tracks.

While it might be fun to imagine, the owner of these prints is not some monster of the deep lurking just out of sight. As it turns out, the truth is a less mysterious and more heartbreaking.

It’s true that the tracks are a sign of life, but it’s not flourishing life. Instead, they are remains of living things struggling to survive after ending up at the bottom of the world’s largest sinkhole where the water is anoxic – it doesn’t contain enough oxygen.

In a recent blog post, the chief submarine pilot on the expedition Erika Bergman explains that it’s not uncommon for conches to accidentally fall over the edge of the blue hole. Unable to crawl up the steep walls once again, these creatures inevitably suffocate, leading to what she describes as “conch graveyards.”

“We can see each conch with little tracks back up the hill trying to escape, then a slide mark where it slid back down after presumably being asphyxiated in the anoxic environment,” writes Bergman.

“So much sand billows down the steep rim of the hole at this location that fallen conch must be getting covered up quickly, so the sheer number of visible shells is a pretty good indicator that the conch population is healthy – it’s slightly morbid but describes something positive.”

The expedition was made in December of last year, and the team included not only Bergman, but billionaire Richard Branson and Fabien Cousteau, the grandson of explorer Jacques Cousteau.

The Great Blue Hole is a complex system of limestone caves, and before it was drowned by melting ice caps 14,000 years ago, it used to stand on dry land. Today, at over 300 metres wide (nearly 1,000 feet), it remains a largely unexplored natural wonder.

Describing his trip to the bottom, Branson said he was taken aback by how quickly the seas must have risen to engulf such a large hole.

“At 300 feet [91 metres] down you could see the change in the rock where it used to be land and turned into sea,” he wrote in a blog about the adventure.

“It was one of the starkest reminders of the danger of climate change I’ve ever seen.”

Looking out the glass dome of their submarine, the team dove even further, plunging right through a dark fog of hydrogen sulphide, which had gathered over the centuries.

Like a light switch, everything went black. Below the fog there was not a hint of oxygen to be detected.

“It was extremely eerie,” described Branson. “We didn’t expect to see any creatures below. But when we got to the bottom we could see crabs, conches and other creatures that had fallen into the hole, arrived on the bottom and then ran out of oxygen and died.”

Using sonar to peer through the darkness, the team found overhangs, crevices and enormous stalactites, hanging like icicles right near the bottom. It was something that had never been seen before.

“You can be 20 or 30 meters away from a stalactite or a hunk of the wall and see it in every perfect detail, better than eyesight could even provide,” Erika Bergman told CNN Travel.

And then, of course, there was the “conch graveyard.” This was a stretch of the hole where the team saw hundreds of dead conches, at last defeated in their escape. 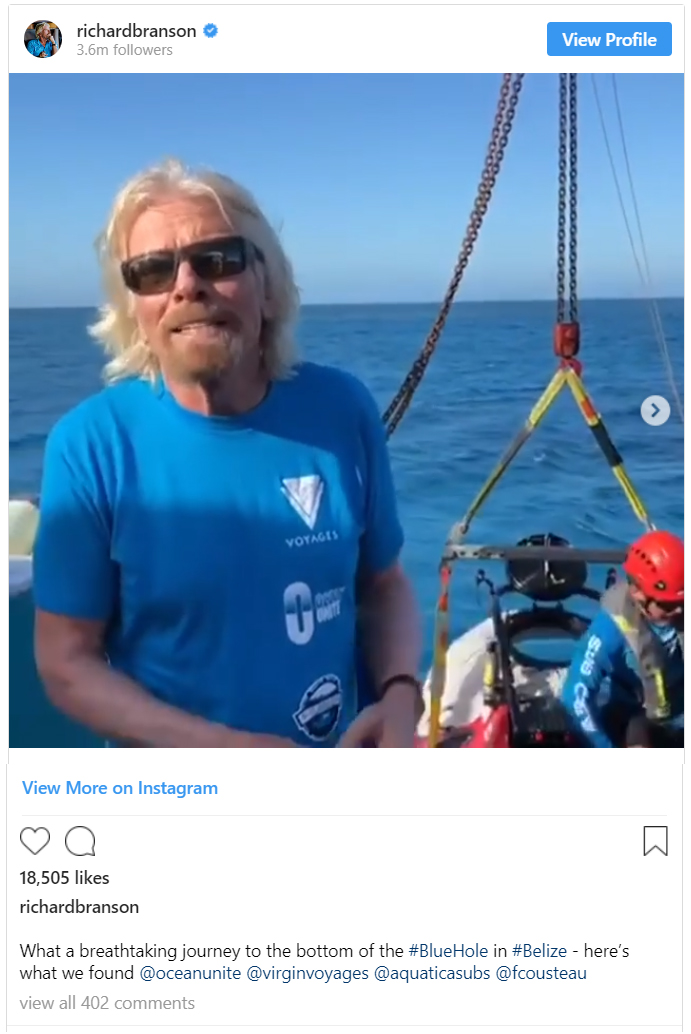 This wasn’t the only expedition, by the way. In November and December, the teams made over 20 dives into the nooks and crannies of the blue hole, and now, as a result, we have the first complete 3D map of this natural wonder.

At no point was a monster or a Maya mystery ever found. Instead, the most terrifying discovery were the consequences of our own history. Even here, there was no escape from ourselves.

“Sadly, we saw plastic bottles at the bottom of the hole, which is a real scourge of the ocean.”

“Hopefully by this trip taking place we have raised even more awareness of the need to protect the ocean and tackle climate change now – before it is too late,” he adds.

You can watch footage from the expedition at Discovery.

Incredible ‘Fairy’ Robot Sails on The Breeze Like a Floating Dandelion
Bar Graphs Induce a Hidden Bias in Interpretation, Experiment Shows
A Hidden Food Web Exists in The Desert, And It Thrives on Death
This Small Australian Marsupial Is Quite Literally Dying For Sex
Orcas Are Contaminated With a Forever Chemical Associated With an Unlikely Product