Spider silk is well known as one of the strongest natural materials in existence, but now scientists have a better understanding of why – and it’s all to do with the old adage of strength in numbers.

Through an atomic force microscope trained on the silk of a brown recluse spider (Loxosceles reclusa) – which essentially feels its way along at a molecular level – each strand of its silk was shown to be made up of thousands of nanostrands or nanofibrils, running in parallel.

It’s hoped that the discovery will help us continue to develop super-strong materials of our own.

Each of these thin nanostrands is made up of protein and measures less than a millionth of an inch in diameter – hundreds of thousands of times thinner than the width of a human hair, say the scientists from the College of William and Mary in Virginia. 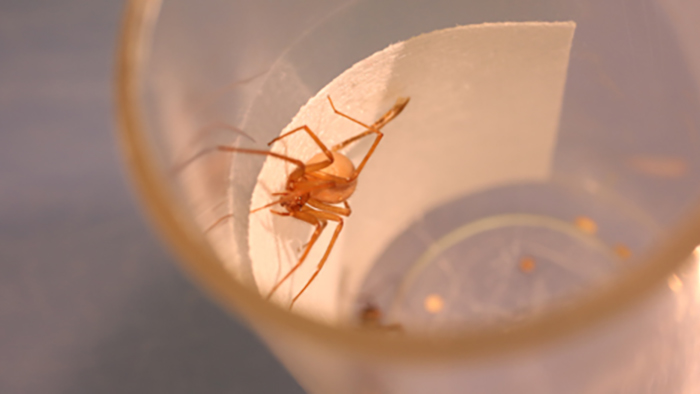 “We were expecting to find that the fiber was a single mass,” says one of the team, Hannes Schniepp. “But what we found was that the silk was actually a kind of tiny cable.”

The idea of nanostrands in spider silk has been suggested before, but this is the first time scientists have been able to clearly see how it works, and to what extent. The researchers chose the brown recluse spider for the study, because its silk is flat rather than cylindrical.

Each nanostrand is at least 50 times as long as it is wide, and once you factor in the special looping technique that the same lab team discovered last year, you’re left with a super-sturdy material that’s five times stronger than steel in the weight it can hold.

“We believe that the secret of brown recluse spider silk essentially stems from the individual nanofibril,” says Schniepp.

SIlk spun by other spiders isn’t structured in the same way, the scientists point out – it’s specially designed for spiders looking to catch prey down at the ground level. And while the links between individual nanostrands are quite weak, they’re collectively very strong.

The team was able to develop a structural model based on their findings that might eventually lead to us making our own materials based on the principles of the brown recluse spider’s silk – long, ultra-thin, flat cables.

Plenty of research has already been carried out into creating artificial spider silk – for everything from making bike helmets to healing wounds – and the latest nanoscale research should prove very useful indeed.

“The results being reported provide an interesting clue to the ‘tricks of the trade’ that nature has in producing amazing materials,” says Mohan Srinivasarao from the National Science Foundation, which helped fund the research.

“Understanding the properties of brown recluse silk at the molecular level not only provides insights into one of nature’s toughest materials, it may also provide a pathway for the design of other synthetic materials.”

The research has been published in ACS Macro Letters.

Rapidly Melting Glaciers Are Releasing a Staggering Payload of Unknown Bacteria
Eerie Video of Bizarre Sheep Phenomenon Has The World Running in Circles
Here’s How NASA Determines Which Applicants Make It to Be Astronauts
We Could Be Living And Working on The Moon by 2030, Says NASA
Our Nearest Galactic Neighbor Engaged in ‘Cannibalism’ Again And Again, Study Finds