The US Geological Survey (USGS) has recently updated their assessment of potentially threatening volcanoes across the nation, making changes in light of more than a decade of fresh research.

First, the good news: all of that data has revealed a handful of volcanoes with minimal threat of causing wanton destruction can now be crossed off the list altogether.

The bad news? There are still 18 bad boys to keep a close eye on. And it’s probably not a huge surprise that 16 out of those are on the North American west coast. 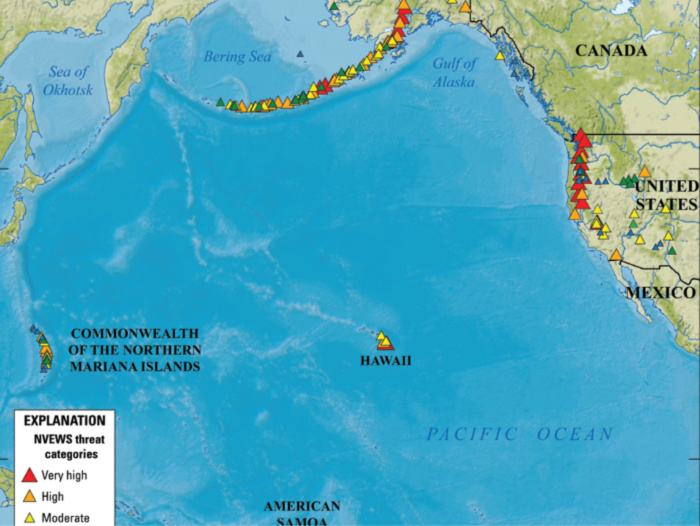 The last time the USGS ranked volcanic threats was back in 2005. A lot has been discovered about geology since then, so the National Volcanic Threat Assessment figured it was time to go back to the list and double check their sums.

Given the US is one of the most volcanically active nations on the planet, eruptions are a way of life. Just ask Hawaii, which saw some spectacular displays from Kīlauea volcano earlier this year.

Then there are those occasional cataclysmic time bombs on the North American continent itself, like Mount St. Helens in Washington, which took the lives of 57 people nearly 40 years ago.

Knowing which mountains are going to blow sky high in a local apocalypse and which are likely to be smoking duds informs authorities on how to plan for the worst.

So the USGS categorises volcanoes according to numerous factors that describe their threat, as either very low, low, moderate, high, and very high.

These levels don’t so much as describe their chances of erupting any time soon, as much as their impact should they did awaken in a pyrotechnic blaze of molten rock and ash plumes.

There’s the obvious lava flows and flying boulders to contend with, but billowing clouds of dust particles can interfere with air traffic, potentially costing hundreds of millions in cancelled flights and rerouting.

That’s not to mention toxic gases and fine particulates polluting the atmosphere, increasing health risks. Long after the fireworks die away, volcanoes can still cause immense damage in a variety of ways, depending on their remoteness.

Take Imuruk Lake for example. Its volcano sits out in the Alaskan wilds, where any ash-laden plume is unlikely to interfere with aircraft. Last seeing action around 300 CE, it’s way down the bottom of the list of potential threats at number 161.

It joins 20 other volcanoes in the lowest threat category, which now contains 11 fewer occupants than in the 2005 assessment.

All up, 20 volcanoes have had their risk demoted or removed altogether following their revaluation. Mt Washington in Oregon is now considered dead as a dodo, and just as likely to come back. So has the state’s Four Craters lava field.

But the 18 red-alert monsters that sit in the list of highest threats are the same ones that were identified in 2005.

Number one should come as no surprise. Kīlauea’s latest activity saw more than 700 homes and businesses destroyed, making it the most threatening volcano the US has to contend with right now. 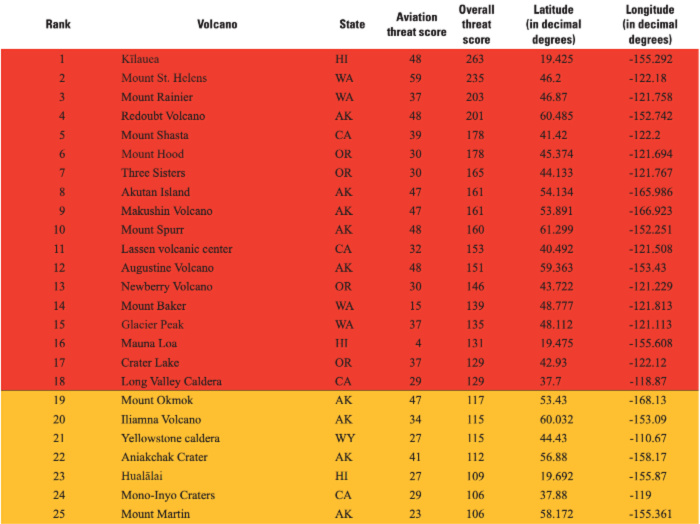 Looking at the top 25, people might be somewhat relieved to see that the much-feared Yellowstone caldera doesn’t make the riskiest top 18, sitting at 21.

If you’re seeing a pattern, most of the most severe threats are on the US West Coast, with three of the 18 in California, five in Alaska, four in Washington and another four in Oregon.

None of this means it’s time to pack up and head to Florida. We wouldn’t recommend it anyway, what with their human-sized lizards prowling neighbourhoods, toxic algal blooms, and annual tropical storms building up steam.

But it does give scientists a better idea of what to prioritise in their research, and governments a good sense of where to put their money.

As populations swell, air traffic increases, and new kinds of technology and infrastructure stretch across the nation, there’s no doubt we’ll be seeing more additions to the high threat categories in future editions of the assessment.

Thankfully somebody is keeping a close eye on these sleeping giants.

This Supposedly Rare Ancient Fossil Was Actually Made by Something Much More Recent
‘Polluted Realism’: How Monet’s Art Mirrors The Evolution of Smog
Even While Dormant, Volcanoes Leak Climate-Changing Gasses Into The Atmosphere
We Can Now Hear The ‘Sound’ of One of The Most Beautiful Stars
Codebreakers Have Deciphered The Lost Letters of Mary, Queen of Scots