Wisdom, a Laysan albatross (Phoebastria immutabilis) who is at least 68 years old, has done it again – she’s hatched a new chick at her nesting ground in Midway Atoll National Wildlife Refuge.

Each year since at least 2006, Wisdom and her mate Akeakamai have been coming back to the atoll in the Pacific Ocean near Hawaii to lay an egg and hatch a chick. No small feat, considering the typical lifespan of albatross is around 50 years.

How do we even know that Wisdom is such an old bird?

The very first albatross on the Midway Atoll was given a band and number in 1936. Since then, 250,000 albatrosses have been banded, letting researchers keep track of specific birds.

Wisdom was banded in 1956 by ornithologist Chandler Robbins. At the time, she was estimated to be around six years of age because she had returned to the breeding site as an adult, which these birds don’t do until they’re around five and ready to find a mate. But it’s really hard to tell the precise age of birds unless they are very young.

So, we know that Wisdom was about five in 1956 (although she could have been older), so that makes her at least 68 years old today.

There was a big gap between those years though – no one had seen Wisdom until the 2001/2002 season, when Robbins found her again and re-tagged her.

But since then she’s been a regular of the Midway Atoll. As the US Fish and Wildlife Service (USFWS) Pacific Region explains in a blog post, it’s pretty uncommon for an albatross to return, lay and hatch an egg every year – but Wisdom isn’t one for rules.

“Albatross return starting in October to meet their mate, and will spend approximately seven months on Midway Atoll to incubate and raise their chick.  Albatrosses lay a single egg and both parents take turns incubating it for a little over two months,” explains the blog post.

“After the chick hatches, another five to six months will pass before it leaves the island to fly out to sea, or ‘fledge’. This process takes up so much time and energy, most Laysan albatross do not lay an egg every year.”

The team estimate she’s already raised between 31 and 36 hatchlings with Akeakamai (who, by the way, is her mate for life), and she looks like she’s got no interest in stopping for the moment. 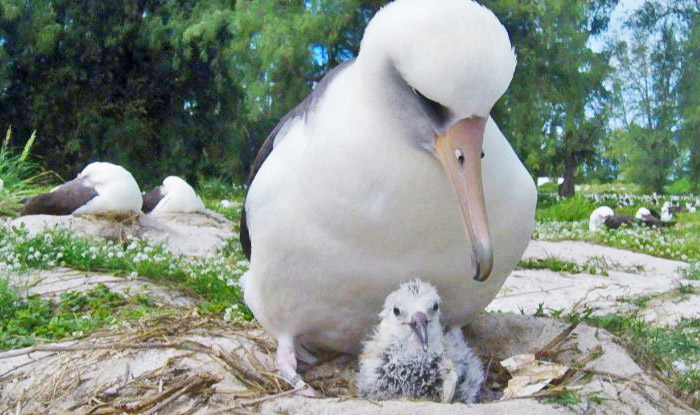 “Because Laysan albatross don’t lay eggs every year and when they do, they raise only one chick at a time, the contribution of even one bird to the population makes a difference,” said Bob Peyton, USFWS Project Leader for Midway Atoll Refuge and Memorial.

And in a world of climate change, mass extinctions, and generally bad news – it’s nice to have Wisdom bringing some good news year on year.

“She’s incredibly powerful as a symbol of why we do what we do and why people all over the world pay attention to her,” said Beth Flint, USFWS biologist.

Physicists Break Record Firing a Laser Down Their University Corridor
A Rare Green Comet Can Be Seen in The Sky, And It May Be Our Last Chance
This Species of Carnivorous Plant Evolved Into a Toilet And Is Now Winning at Life
The True Extent of Global Warming Has Been Hidden, Scientists Warn
An Expert Explains Why The Radioactive Water Stored at Fukushima Should Be Released