A white Christmas is not usually part of the Australian experience, but this holiday season, the weather outside has been frightful indeed.

On what would’ve usually been a hot and sweaty December afternoon, Sydneysiders were instead entertained with a deluge of hard, icy rocks, cascading from the heavens in a variety of remarkable shapes and sizes.

These hailstones at #Wamberal near #Gosford are bigger than golf balls #SydneyStorm. @2GB873 pic.twitter.com/M8FLJs1xtp

The size of the hail that just fell in the #SydneyStorm is huge pic.twitter.com/Uac6V5l03s

How’s this whopper from Camden, wouldn’t want to be on the receiving end of that! #sydneystorm pic.twitter.com/75LsdlgRNW

These massive hailstones, the size of golf and tennis balls, proceeded to pummel the city, smashing windows, plunging into pools, and generally inciting both awe and fear wherever they fell.

The sheer size of these hailstones is impressive enough, but perhaps more astonishing are some of the intricate shapes they come in.

Residents were amazed to find some balls of hail that looked like cauliflowers, daisies or – if your imagination is up to it – little frozen versions of Saturn.

Very large hailstones in western and northern Sydney this afternoon. 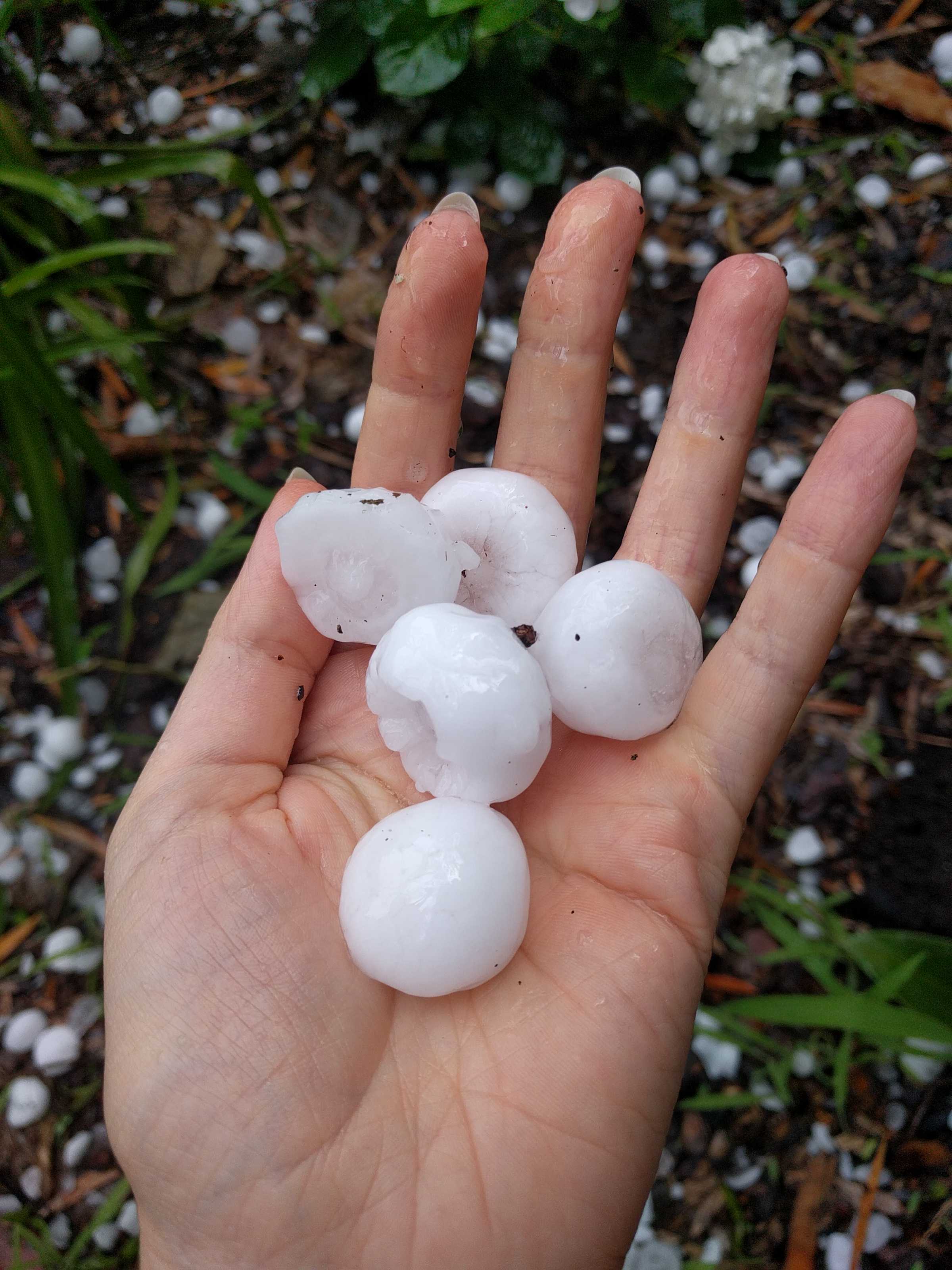 It seems like these would be impossible structures for nature to create, but the science is actually quite simple.

Hailstones are essentially sheets of water vapour – like the layers of an onion – that form and freeze on top of each other during thunderstorms. As the initial droplets surge upwards, riding on draughts of warmer air, they meet freezing cold temperatures at the storm’s apex, supercooling into small ice ’embryos’ no bigger than a centimetre in diameter.

From here, these frosty infants then begin to grow. As the storm’s heavy winds whip them around, they collide with supercooled water droplets, freezing together upon impact and adding more and more girth, until, at last, it all becomes too heavy for gravity and, possibly, ends up smashing into your car window.

After all that, I couldn’t run outside to move my car…#SydneyStorm @2GB873 pic.twitter.com/LCVK5nCqq2

Each little twist and turn in this process creates a unique shape, moulding the various bumps or ‘lobes’ you can see on large, spherical hail. As meteorologist Joshua Soderholm told the Australian Broadcasting Corporation, the hailstone that looks like a cauliflower is a ‘cusped lobe’ structure that has been slightly melted.

In the middle of this stunning structure, a white ball can be seen – an example of what scientists call ‘dry growth’, which is when water freezes immediately upon contact.

But just outside the middle is a transparent bit of ice. This is an example of wet growth, which is when water droplets that collide freeze more slowly, allowing air bubbles to escape.

Lastly, on the very edges of the structure, there is more white ice, which is once again from dry growth.

Researchers believe this lobe structure may allow the hail to grow into a larger structure while remaining solid, as each lobe increases the hailstone’s surface area and makes the airflow around it more turbulent. This allows for a greater transfer of heat away from the stone.

But while most cusped lobe structures are spherical in appearance, we can get a special glimpse into the hailstone’s interior if it’s melted somewhat during the fall – as you can see below.

Such hail is an impressive thing to witness, and the stress is considerably lessened if you don’t have a garden or a vehicle getting totally trashed by giant ice rocks – unfortunately, many people did experience damages to their cars and other property, just in time for the summer holidays. Ho ho ho.

This Small Australian Marsupial Is Quite Literally Dying For Sex
A Mysterious Whirlpool Appeared Over Hawaii, And It Could Be Because of SpaceX
Scientists Reveal The Most Precise Map of All The Matter in The Universe
Black Swans Could Be Entirely Wiped Out by a Single Virus, Scientists Warn
Physicists Used Sound Waves to Give a Tiny Sun Its Own Kind of Gravity